How to do outrage 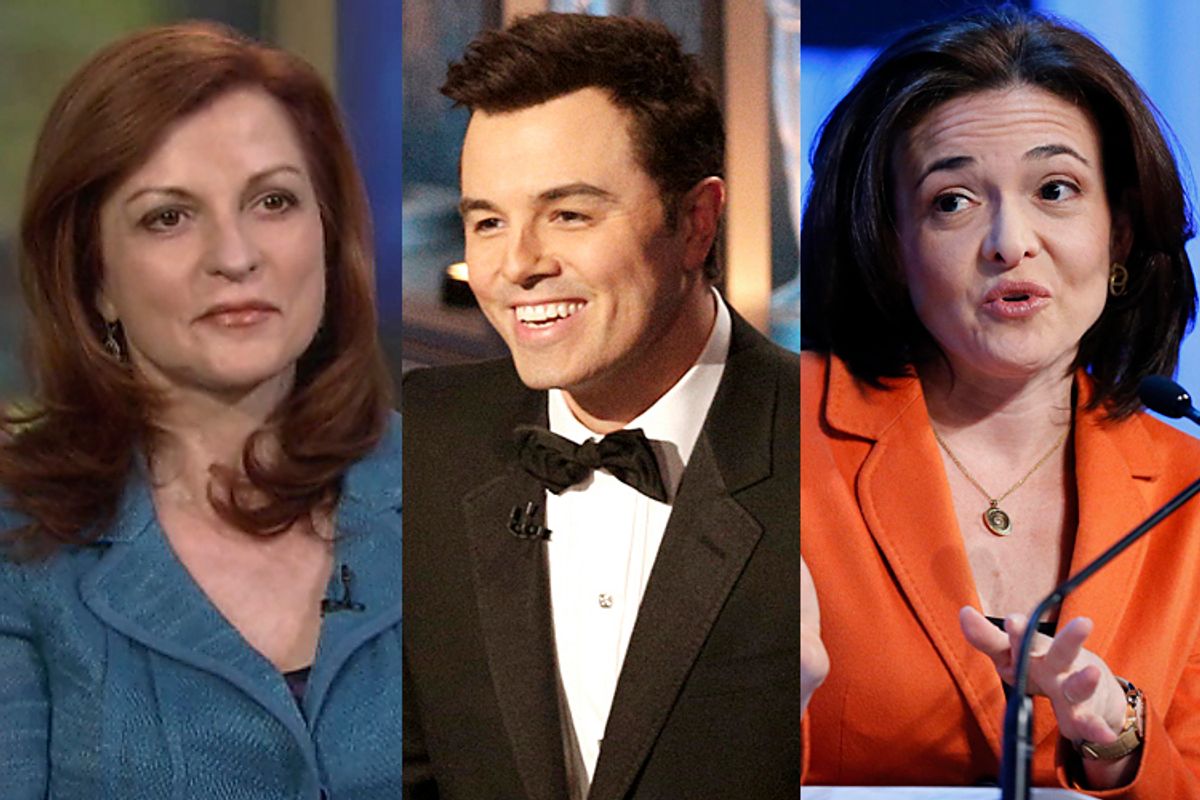 This has been a banner week in near-universal opprobrium. I say near-universal, because in the department of backlash to the backlash, there are already claims that the Internet has merely emboldened the "humor police," whether it's criticizing Seth MacFarlane's Oscar hosting or the Onion's supposedly brave joke about a 9-year-old girl. So let me offer a conditional defense of outrage politics.

Take the misogyny and bigotry on display at the Oscars Sunday, and everything that followed. Salon's Andrew Leonard may be right when he says that "in our pre-Twitter past, we might have simply turned off the TV or switched channels once MacFarlane started singing his dumb song about boobs. But now we stay watching to share our hate!" (Wait, how can we know what people did before Twitter? Maybe I can put a call out on Twitter.) Sharing that "hate" en masse happens to be a communal experience, something that has its own virtues in this atomized, time-shifted age. But it also exorcises demons that without something specific on which to fix righteous rage, are suppressed or implicitly accepted by society. Everyday slights and institutional discrimination are hard to point out on your own. Watching them on a screen or finding them in a tweet helps make them visible.

With enough of that outrage bubbling to the top, the major actors in all this are forced to explain themselves, particularly as people with bigger platforms take note. But it's humor! you might be protesting right around now, as if comedy and any other pop culture occurs in a vacuum, where it can't be either reinforcing or questioning all the fucked-up things in the world. On the latter front, forced ultrasound-before-abortion laws became politically toxic in Virginia -- and in some cases beyond -- after passing in several states with very little fanfare, when Amy Poehler and Jon Stewart made hilarious jokes about it. (Notably, those jokes were not at the expense of the women seeking abortions; they were at the paternalistic politicians'.)

Here's how I see it, after a few years in the trenches of the habitually outraged: Offensive remarks are worth seizing upon if they effectively distill the worldview of the speaker or that worldview's sway in the world. Last year, near-instant outrage helped beat Todd Akin and Richard Mourdock, and enthuse voters to reelect Barack Obama. After his attacks on Sandra Fluke, it finally made a dent in Rush Limbaugh's commercial impunity with advertisers. And hey, maybe Scalia's calling the Voting Rights Act a "racial entitlement" could get more people angry about the attacks on the Voting Rights Act, though those lifetime appointments and judicial fiats provide some roadblocks.

Of course, the potentially scary thing is when the outrage is turned back on you. That's not a pleasant experience, but it can be a necessary and educational one, depending on the merits of the case. I find myself going back a lot to what Jay Smooth said about call-out culture and personal accountability. (He happened to be talking about Jon Stewart's response to a piece I published at Jezebel about sexism at "The Daily Show," but I think it's broadly applicable).

"So many people are susceptible to that, whenever someone questions something they said or did, people automatically take it as a referendum on, “am I a good person or not?” and the response is, “how dare you question me, I’m a good person!” And it’s not about whether you’re a good person; prejudice and privilege and the blind spots they create, these are things good people are going to struggle with all their lives. We’re all human beings, we’re all going to be prone to having blind spots and preconceived notions – that’s the nature of being human, we’re imperfect. This attitude that, “I’m a good person, therefore I shouldn’t be questioned on things” is kind of like, “my bathroom is clean, so I don’t need to clean my bathroom.” ... The key to being a “good person” is to constantly challenge yourself and be open to being challenged, and to respond to criticism with humility."

So why is this defense conditional? Because in certain cases, we just don't have all the information. The Oscars can be judged on their own terms, and Seth MacFarlane's oeuvre is out there for anyone who cares to partake. But lots of things get lost in a time-strapped, shoot-first, check-later media climate. I'm with Andrew when he worries that when "every stumble, every perceived outrage, every moment of weakness or arrogance gets instant crowd-mob treatment," it can be "exhilarating" but also flattening: "Lashing out is just so easy. The first tweet to crack the whip gets retweeted around the world before you can say the words 'echo chamber.'" This is also a good week to talk about that, but not because of the Oscars.

I'm referring, if you haven't been paying attention, to the race to scorn Sheryl Sandberg. The Facebook executive has written an avowedly feminist book about women in the workplace that has been gleefully misrepresented, in several cases by people who admit to not having taken the time to read it, in platforms as big as the Washington Post and the New Republic. It is, of course, fair game to critique Sandberg's actual message, which she freely concedes has a specific audience of professionally ambitious women who can afford to make choices to "lean into" the workplace. If only more people took a moment to hear that message out. So far, much of the outrage has been aimed at either cherry-picked quotes or straw women arguments, and plenty of media outlets have been all too happy to give their imprimaturs to such willfully incomplete work.

Sadly, one of the original sins on this front was a New York Times piece by Jodi Kantor that quoted Sandberg saying she'd always thought she'd "run a social movement" alongside concerns that she was loftily lecturing the less fortunate. The Times ran a correction that clarified the context -- Sandberg was saying she'd been immersed in the nonprofit world and didn't expect to find herself in the corporate one -- but plenty of unfair damage has already been done, including in an opportunistic column by Maureen Dowd, that lectured Sandberg on how true social movements are built. Dowd's mockery of Sandberg, including in her headline, for calling herself a "pom-pom girl for feminism" also failed to note that it was a joke in belated response to a sexist comment from Tip O'Neill. Dowd, of course, has never needed a 140-character limit to traffic in reductiveness and phony umbrage. Some things are timeless.