"Stoker": A pervy American Gothic gets lost — and even weirder — in translation 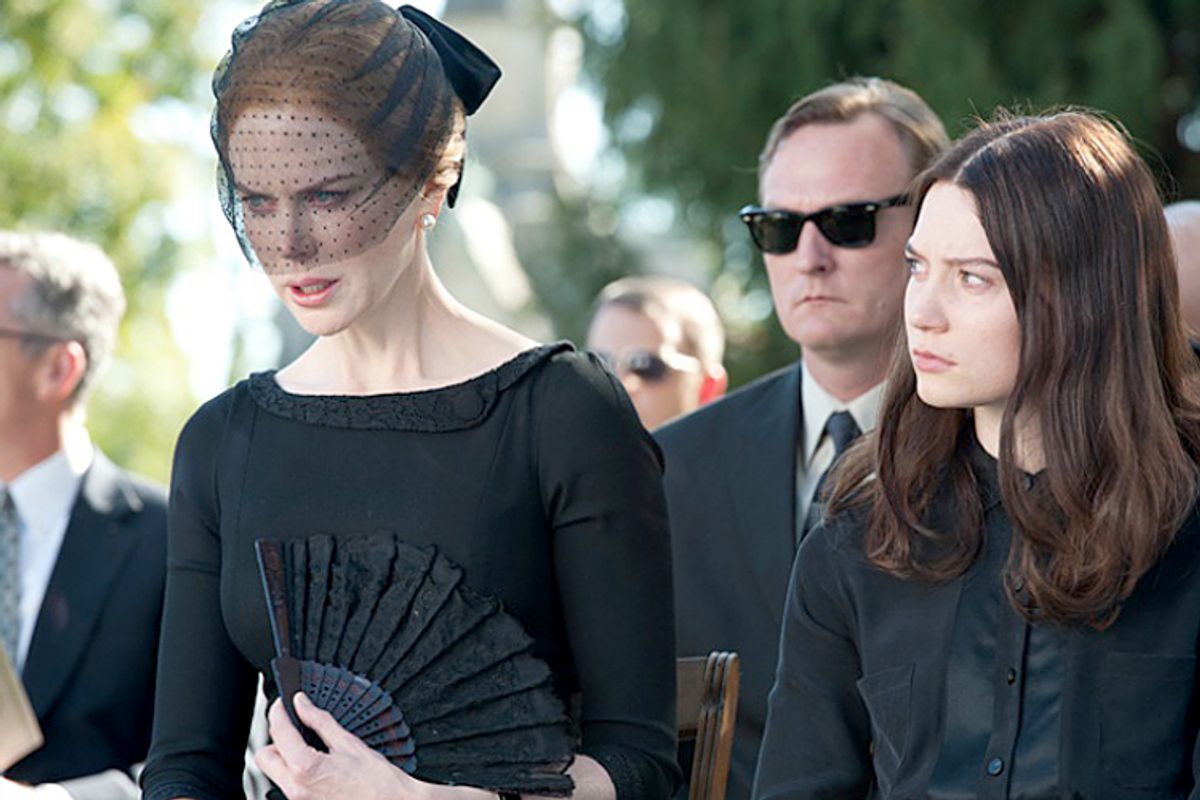 “Stoker,” which plays something like a remake of “The Addams Family” mixed with “The Paperboy” -- but without the laughs of either – belongs in a special category of movie badness, or perhaps two different but overlapping categories. It’s a visually striking but fundamentally terrible film made by a good or (some would say) great director, and it’s also the latest entry in the “Zabriskie Point” collection, in which art-house-type filmmakers from overseas come to America with big dreams after smoking the crack of American cinema their whole lives, only to embarrass themselves with ridiculous clichés and go home.

Now, Michelangelo Antonioni’s semi-hilarious vision of late-‘60s rebellion in “Zabriskie Point” (tag line from the trailer: “How you get there depends on where you’re at”) still has its defenders, and so do the other examples I can think of offhand, like Emir Kusturica’s Johnny Depp-starring bomb “Arizona Dream” and Bruno Dumont’s “Twentynine Palms.” (I’m not aware that anyone’s willing to make a case for John Woo’s unfortunately named “Paycheck,” starring a then-down-and-nearly-out Ben Affleck, but that’s arguably a different category.) No doubt numerous critics will defend "Stoker," the first English-language film by “Oldboy” director and international cult fave Park Chan-wook, for all kinds of reasons: Its memorable and deliberately artificial mise-en-scène; its artful, elegant, off-angle traveling shots; its film-school Cuisinart blending of Hitchcock, vampire movies and Anglo-American gothic; its intense and introspective lead performance from Mia Wasikowska.

And they’ll be right, at least up to a point. If you’re OK with a film that exists entirely within a movie-movie universe of nested references, and makes no effort at realism or emotional connection, and if you’re OK with Park trying to out-Tim Burton at his own game, then you may well find “Stoker” enjoyable. As for me, I’ve done my time with movies that require me to keep saying to myself, “I bet this scene is really awkward and nonsensical on purpose, because of, um, the alienation of contemporary existence or something!” Anyway, if you’re gonna make that kind of picture, you need to convey the impression of being in control of the material at all times. I never got the sense that Park (who doesn’t speak much English) had ever read an adequate translation of actor-turned-screenwriter Wentworth Miller’s script, let alone that he had any idea what it was actually about.

Maybe he was right not to think about it too much, because “Stoker” is a mishmash of literary references, scenes clipped from classic thrillers and horror movies, and undigested and largely discredited Freudian psychology. Miller drops us into the middle of an unexplained family history, but at least for me the mystery and intrigue wore off quickly, and I was lost in oblique-land with coy and irritating people. Wasikowska plays loner Goth-girl India Stoker, scion of an accursed clan who lives in a crumbling rural manse with her fragile, edgy and two-thirds crazy mother (Nicole Kidman). I suppose India’s family name must be meant as a reference to “Dracula” author Bram Stoker, but like so many other things about this movie that chip never gets cashed in. Whatever! On India’s 18th birthday, her beloved father dies in a mysterious car accident – he’s played by Dermot Mulroney, but seen only in photos and wordless flashbacks – and a mysterious new uncle named Charlie (Matthew Goode), whom dear old Dad never mentioned, suddenly shows up after a lengthy sojourn in “Europe.” Geez, you don’t think there could be some sinister connection between these events, do you?

Each of these characters seems freakish and disconnected, both from each other and from any actual or fictional vision of reality. You have to admire Kidman, sort of, for having carved out an impressive mid-career niche playing deranged but still-beautiful harpies in auteur films. Even by those standards Evelyn Stoker is a mannered creation, drifting through the house like a community-theater Blanche DuBois, way too obviously smitten with her late husband’s obviously wacko brother. (While the setting for “Stoker” is allegedly New England, it was shot in Tennessee and is a Southern gothic in all but name. In fact, the whole production is very close to the recent teen-oriented bomb "Beautiful Creatures," without being nearly as enjoyable.) With his startling and almost colorless gray-blue eyes and his simultaneously fashionable and personality-free J. Crew wardrobe, Goode’s Uncle Charlie might as well be named The Banality of Evil. Pretty much the only suspense involved in “Stoker” is the eventual revelation of which variety of evil Charlie turns out to represent.

But it’s Wasikowska who does the medium-heavy lifting here, infusing what is basically a generic raven-tressed Goth girl undergoing a sexual awakening (ooh, scary!) with a raw, needy energy. India can supposedly see, hear and feel things other people can’t, including the daddy-long-legs who crawls up her skirt while she’s sitting on the piano bench playing Philip Glass and having incestuous uncle-porn fantasies. (As I have said, knockoff Freudianism abounds.) Park and cinematographer Chung Chung-hoon (who also shot “Oldboy” and “Thirst”) stick closely to India’s subjective point of view, so we’re never quite sure what’s real and what’s not as events in the Stoker household turn more violent and more sexualized. About the only thing you can say for sure is that both India and her mom develop the serious hots for Uncle Charlie, despite the fact that everything about him – including his resemblance to Joseph Cotten’s visiting Uncle Charlie in Hitchcock’s “Shadow of a Doubt” – pushes the Gaydar meter to, like, 11.8.

Unfortunately, I also decided pretty early on that I simply didn’t care whether all the uncle-sex and mayhem in “Stoker” was supposed to be happening in the movie's outer world or was just a figment of India’s overheated adolescent imagination. (Speaking of which, the character is supposed to be 18 years old and a high-school senior, yet also a virginal wild-child with little or no experience with guys! And it’s not the ‘50s or anything; people have cellphones in this movie.) By Park’s standards, the bloodshed in this movie is restrained, at least until a final few scenes of splatter, and the assured and atmospheric photography gives the illusion of total artistic control. But Uncle Charlie’s so-called secret turns out to be both depressing and obvious, and the arch, coy misdirection of Miller’s screenplay is just an attempt to divert our attention from the fact that the story makes no sense. “Stoker” left me looking back at Park’s Korean movies in dismay – are they all, in fact, exercises in style as empty as this one?