If the famed reporter is embellishing an email, can he be trusted on the big questions? 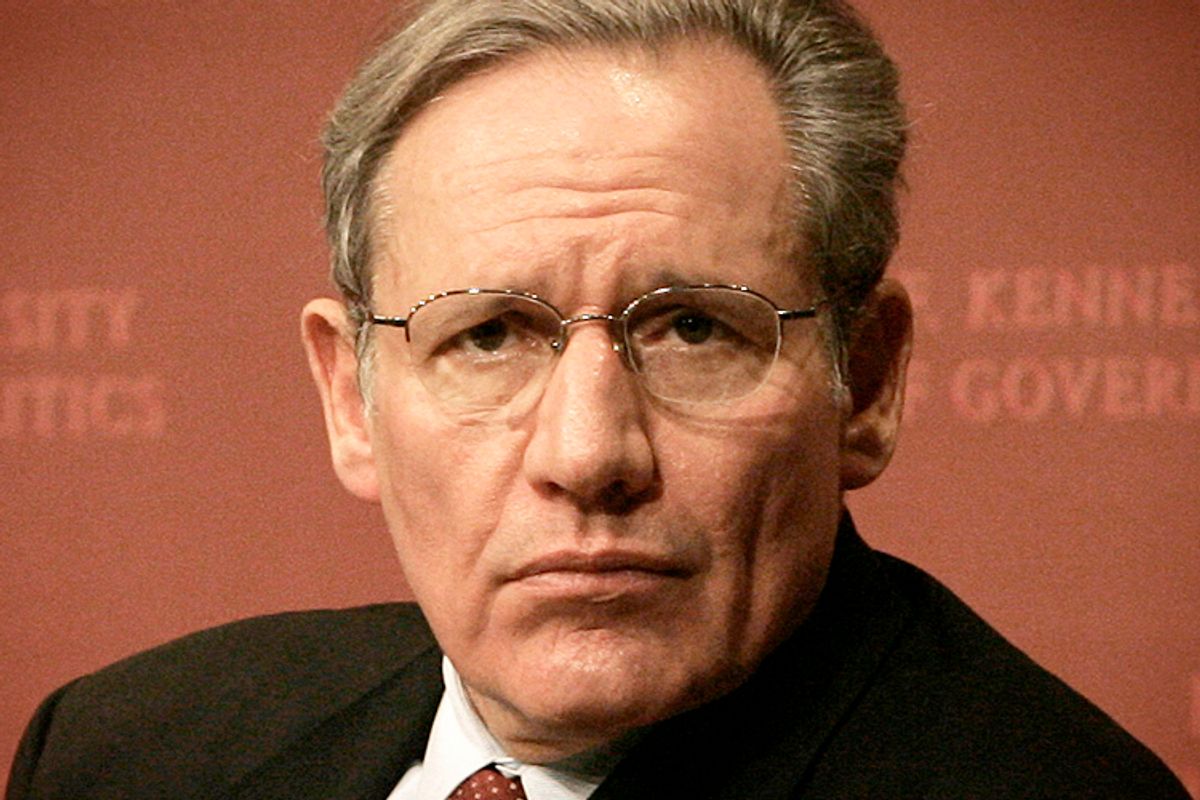 Bob Woodward’s recent embellishment of a supposed threat made to him by a senior White House official is just the latest questionable assertion the legendary reporter has made over his career, and is reigniting discussion as to the veracity of other claims he’s made.

Woodward made the cable news rounds on Wednesday claiming that he'd been threatened by a senior White House staffer in a series of tense arguments and told he would "regret" his analysis of the origin of the sequester.

"It makes me very uncomfortable to have the White House telling reporters, you're going to regret doing something that you believe in," he told CNN..

According to Politico, Woodward zeroed in on the word "regret."

"Woodward repeated the last sentence, making clear he saw it as a veiled threat. “ ‘You’ll regret.’ Come on,” he said. “I think if Obama himself saw the way they’re dealing with some of this, he would say, ‘Whoa, we don’t tell any reporter ‘you’re going to regret challenging us.’"

But when the actual emails between Woodward and Gene Sperling found their way to Politico, it didn't exactly reinforce the sinister threat the veteran reporter implied. Indeed, it looked like some of the politest pushback possible between a longtime economic hand and the longtime chronicler of the Washington power elite.

Here's what Sperling wrote, according to the emails Politico obtained:

I do understand your problems with a couple of our statements in the fall — but feel on the other hand that you focus on a few specific trees that gives a very wrong perception of the forest. But perhaps we will just not see eye to eye here.

But I do truly believe you should rethink your comment about saying saying that Potus asking for revenues is moving the goal post. I know you may not believe this, but as a friend, I think you will regret staking out that claim.

And here's how Woodward replied, before taking his "threat" story to anyone who would listen:

This is all part of a serious discussion. I for one welcome a little heat; there should more given the importance. I also welcome your personal advice. I am listening. I know you lived all this.

Any reporter or spokesperson sees more hostile language on a near-daily basis and doesn't bat an eyelash. "If this is it, I think many reporters -- and I covered the White House for four years -- received emails like this," said Bret Baier of Fox News, a network that has been one of Woodward's strongest defenders in recent days. "I’m not sure that characterizing it as a threat -- I think Bob Woodward has a little bit of explaining to do about that characterization.”

"I get emails like this almost every hour, whether it's from the White House or the Hill," said NBC's Chuck Todd.

The important question becomes this: If Woodward, who has generated best-seller after best-seller over many decades based heavily on anonymous sources, can't accurately convey a conversation with an email trail, should we trust the anonymous sources in the rest of his reporting?

This is not the first time this question has been raised. Indeed, before Woodward became more meticulous in recent books, adding end notes and more on-the-record sources, it seemed as if every new book brought claims that things were not as Woodward portrayed.

For decades now, critics have charged Woodward with embellishment. He has denied those charges for just as long. But this latest dust-up provides an interesting window on which to judge Woodward's credibility.

Just last year, a biography of iconic Washington Post editor Ben Bradlee -- written by a former Woodward assistant -- revealed that even Bradlee worried about embellishments in the Watergate reporting by Woodward and Carl Bernstein. Bradlee said that he had “residual fear in my soul" that the story of Deep Throat and Watergate as Woodward told it “isn’t quite straight.” (Woodward pushed back hard against the book; Bradlee clarified that he does not doubt Woodward's honesty.)

If Bradlee has doubts about "All the President's Men," the story of how Woodward and Bernstein took down Richard Nixon, they may have been put there by Adrian Havill. In a 1993 biography of Woodward and Bernstein, Havill questioned several key details of the duo’s account of their work in exposing the Watergate scandal, especially the cinematic cloak and dagger tactics.

For instance, Woodward famously used a flower pot on his balcony to signal Deep Throat, but Havill found the apartment faced an interior courtyard, not the street, and thus it would have been virtually impossible for the source to surveil it.

None of the details are critical to the substance of the reporting, but, if they are indeed embellishments, it suggests the desire to construct thrilling and marketable narratives may occasionally trump reality.

In light of today's controversy, we reached out to Havill, who said he’s not at all surprised by the war with the White House. “Listen, Bob Woodward has a book to sell right now,” Havill told Salon. “He needs to maintain his relevancy. All of a sudden he’s shuffling between Fox News at night and 'Morning Joe' in the morning and being on whatever Sunday show panel he’s on, he’s everywhere. He needs to sell that book.”

As Matt Yglesias noted, the book "made much less of a splash than many other Woodward books," thanks in part to a clear anti-Obama tilt, but it didn't manage to attract much conservative attention at the time of its release last year. Now, however, Woodward and his book have caught fire on the right and he's trying to do everything he can to add fuel.

Havill thinks reporters “are asking him the wrong question” about the apparent threat, and instead should be asking if Gene Sperling asked to be kept anonymous or not. If not, then it could presumably suggest some embellishment for dramatic effect on what did not read like a threat to many who have read the complete emails.

Woodward has always been good at capturing people's imaginations and interest, whether it's “little things that make for a more dramatic story,” as Havill said, or by framing evidence in a provocative way, as he’s doing now.

Deep Throat's smoking is a common motif in Woodward and Bernstein's book, and was immortalized in the movie based on it. "Deep Throat was already there, smoking a cigarette," they wrote of one iconic meeting in an underground garage. But Felt said he didn't smoke at the time. To defenders, this was a white lie meant to help hide Felt's identity, but it's an embellishment nonetheless.

Former Post reporter Michael Dobbs, who said he admires and trusts Woodward, wrote last year of the flower pot, "I believe Woodward used a literary sleight of hand in order to disguise the identity of his source." "It may have been technically true that Woodward moved a flower pot around on his balcony in November 1973, and traveled to an underground garage, but he misled readers into thinking this had something to do with a meeting with Deep Throat," he continued. Still, he said the controversy is much ado about nothing, because "the essential points of Woodward’s (and Carl Bernstein’s) Watergate reporting are not in dispute."

Years after Watergate, Woodward caught heat for writing that former CIA Director William Casey confessed on his deathbed to knowing key details about the Iran-Contra Affair. But Casey’s daughter said that Woodward “never got the deathbed confession” and a member of Casey’s security detail wrote that none of the agents guarding Casey allowed Woodward into his hospital room, and that the CIA director was unable to speak at that moment anyway. (Another CIA official said Woodward could have snuck in and that guards were not posted 24/7.)

That same decade, Woodward wrote that Ronald Reagan was incapacitated for longer than publicly known after an assassination attempt, but Reagan’s doctor told the AP, “I never saw anything like [the description in Woodward’s book] ... it’s certainly news to me and I was there all the time.”

As for the recent allegation that Sperling threatened him, Woodward's biographer found it odd, considering there’s little Sperling could threaten him with. Assuming physical harm is off the table, the main recourse would be a loss of access, but, Havill noted, since Woodward is not an official member of the White House press corps and generally has only unauthorized conversations with administration officials anyway, there’s little they could do to cut him off.

Instead, Sperling's note that "you will regret staking out that claim" was probably meant as a warning that he would damage his reputation by reporting it. Indeed, Sperling goes on to call Woodward a good friend and say he's just offering "my sincere advice."

Accusations have also been leveled when Woodward cast his gaze beyond the Beltway. In 1984, Woodward wrote a book about “the short life and fast times” of comedian John Belushi. His close friend and fellow comedian Dan Aykroyd later wrote in his own book that, “There were certainly things that he just got patently wrong. He painted a portrait of John that was really inaccurate -- certain stories in there that just weren’t true and never happened.”

“You can get away with a lot of stuff most of the time when you use anonymous sources,” Havill noted.

As Woodward may now learn, that's harder to do when there's an email paper trail.

A message left at Woodward's home requesting an interview was not returned.