Do you truly own your e-books?

Amazon and publisher restrictions control your access, but a bookstore lawsuit could change that 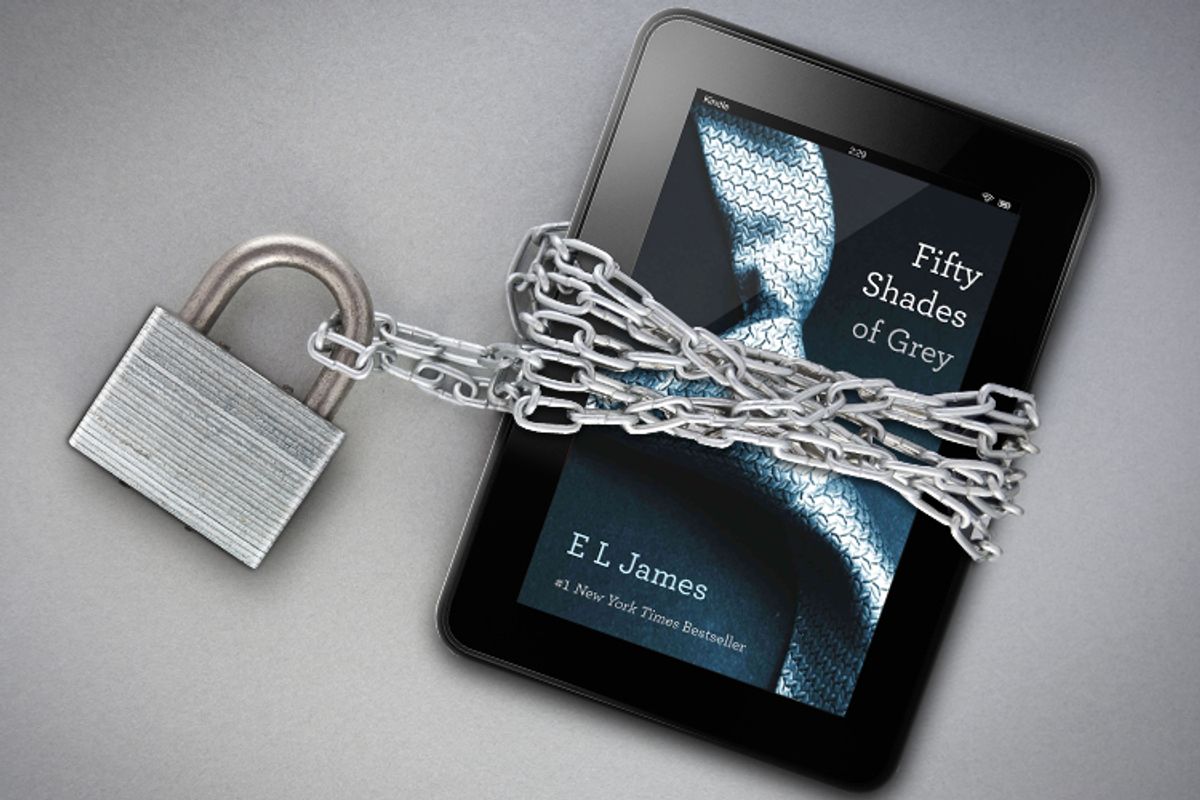 To the casual observer, the e-book revolution has produced two bumper crops: smutty trilogies à la "Fifty Shades of Grey" and lawsuits. First there were the authors (as represented by the Authors Guild), who sued Google Books for digitizing their work without permission. Then the Department of Justice sued five publishers and Apple for adopting a policy known as the agency model. Finally, a trio of independent booksellers filed a class-action suit last week against the six largest book publishers and Amazon, accusing them of collaborating to create a monopoly on e-book sales and shutting small retailers out of the market.

The booksellers — Fiction Addiction of Greenville, S.C., Book House of Stuyvesant Plaza in Albany, N.Y., and Posman Books of New York City — are demanding the right to sell what they term "open-source and DRM-free" e-books, files that can be read on a Kindle or any other e-reading device. The publishers are accused of entering into "confidential agreements" with Amazon making this impossible.

The dispute and the situation that fostered it are confusing, and it can be difficult to suss out how either one affects readers. To put it simply: The Big Six publishers require that all their copyrighted e-books be sold with DRM (digital rights management) protection. DRM is coding designed to prevent the people who buy an e-book from making copies of it. A Kindle will only support DRM-protected books that are in a format that Amazon owns and that only Amazon can sell.

It is possible to import some non-Kindle e-books into your Kindle device or app, but only if those e-books have no DRM. DRM also prevents the purchaser from transferring his or her e-book to another proprietary device, such as moving it from her old Kindle to a brand-new Nook.

The upshot: As long as publishers insist that their e-books be sold with DRM, Kindle owners can only buy those e-books from Amazon. Many independent booksellers have online stores, but they can't sell new e-books to their Kindle-owning customers. Since the vast majority of all the dedicated e-readers out there are Kindles, that's a lot of customers.

Switching devices presents another headache for readers. Late last year, independent booksellers made a deal with Kobo, an e-book retailer that also sells its own e-reader devices. The indies now sell both the devices and Kobo e-books. People who want to support their local independent bookstore might contemplate switching from the Kindle to the Kobo, but if they do they'll have to leave their (DRM-protected) Kindle books behind on their old device. If you are an early e-book adopter who wants to keep and reread the books you bought for your Kindle, you're locked into the Kindle platform.

Tablets like the iPad are slightly different. The tablet's owner can install numerous proprietary apps to read a variety of e-book formats, but the titles have to stay in their own walled gardens. You can't move your Kindle books into your iBook library, for example. This is a minor annoyance, but annoying all the same! When I got my first iPad, I mostly bought Kindle e-books because Amazon's app was more versatile. Since then, iBooks has outstripped the Kindle app, especially when it comes to working with books used for research, and I would much rather read and organize all my e-books in iBooks. I can't. Given such restrictions, it's debatable whether or not I truly own them.

If the bookstores prevail, Amazon may be forced allow Kindle owners to load non-Kindle e-books onto their e-readers. But, as Cory Doctorow pointed out over at Boing Boing, the booksellers in this suit don't object to DRM per se. (They are using the terms "open-source" and "DRM-free" incorrectly.) They just want to be allowed to sell DRM-protected e-books that will work on any e-reader their customers might own.

No one enjoys being sued, but publishers have to be ambivalent about the booksellers' action. At the time they agreed to Amazon's terms, they viewed piracy as a bigger threat than the e-retailer's potential dominance of the e-book market. Today, publishers desperately want to preserve bricks-and-mortar bookstores, and they have come to hate and fear Amazon and its plans to control all retail bookselling.

The more visionary option, and the one that most benefits readers, is to get rid of DRM entirely. Two imprints of Macmillan (whose CEO, John Sargent, has been exceptionally bold in standing up to Amazon), TOR and Forge, took this route last year. TOR and Forge publish genre books -- science fiction/fantasy and crime/military titles, respectively -- often popular with readers with the technological savvy to appreciate the advantages of DRM-free e-books.

It's too early yet to know how well this experiment is working for TOR and Forge. However, many industry observers believe it's just a matter of time before publishers realize that eliminating DRM is the best way to prevent the marketplace for books from being dominated by a single, mammoth, ruthless retailer.

Besides, DRM-free e-books already have a far more prominent proponent: J.K. Rowling. On her Pottermore website, you can buy Rowling's e-books in a standard, DRM-free format (EPUB) that can be easily read on any device. Amazon customers are forwarded to Pottermore by the product page for the "Kindle" edition of a Rowling title. (If there's one entity in a position to push the Seattle slugger around, it's the woman who owns Harry Potter.) Should the e-reading device you've got break down or its format become obsolete, you still own a copy that can be read by whatever new gadget replaces it.

To combat piracy, Pottermore titles are"watermarked": digitally tagged in such a way that if a copy is discovered being used illegally, it can be traced back to the original purchaser. (Apple uses a similar method to monitor the media sold through its iTunes store.) Rowling's books were already being pirated, as any DRM-protected e-book can be if it falls into the hands of a determined and marginally competent scoundrel. Pottermore was founded on the belief that most of the potential readers of Rowling's e-books are honest and believe she should be compensated for her work.

Another company, O'Reilly Media, has been selling e-books (primarily tech manuals) without DRM since 2008. Their founder and an outspoken critic of DRM, Tim O'Reilly, acknowledges that some people will pirate his company's e-books -- but then, e-books with DRM get pirated as well. At least with DRM-free e-books a publisher is giving the paying customers a better, more usable product. As O'Reilly put it in an interview with Forbes, his company has "taken the approach that it’s more important to establish social norms around payment. The way that you do that is by honoring people and respecting how they act. People pay us because they know that if we don’t get paid we don’t do what we do."

Andrew Losowsky for the Huffington Post on the class-action lawsuit filed by booksellers against Amazon and the Big Six, including a full copy of the complaint.