Don't blame the victim, or the photographer

Responding to a photo essay on domestic violence, commenters attacked everyone except the abuser 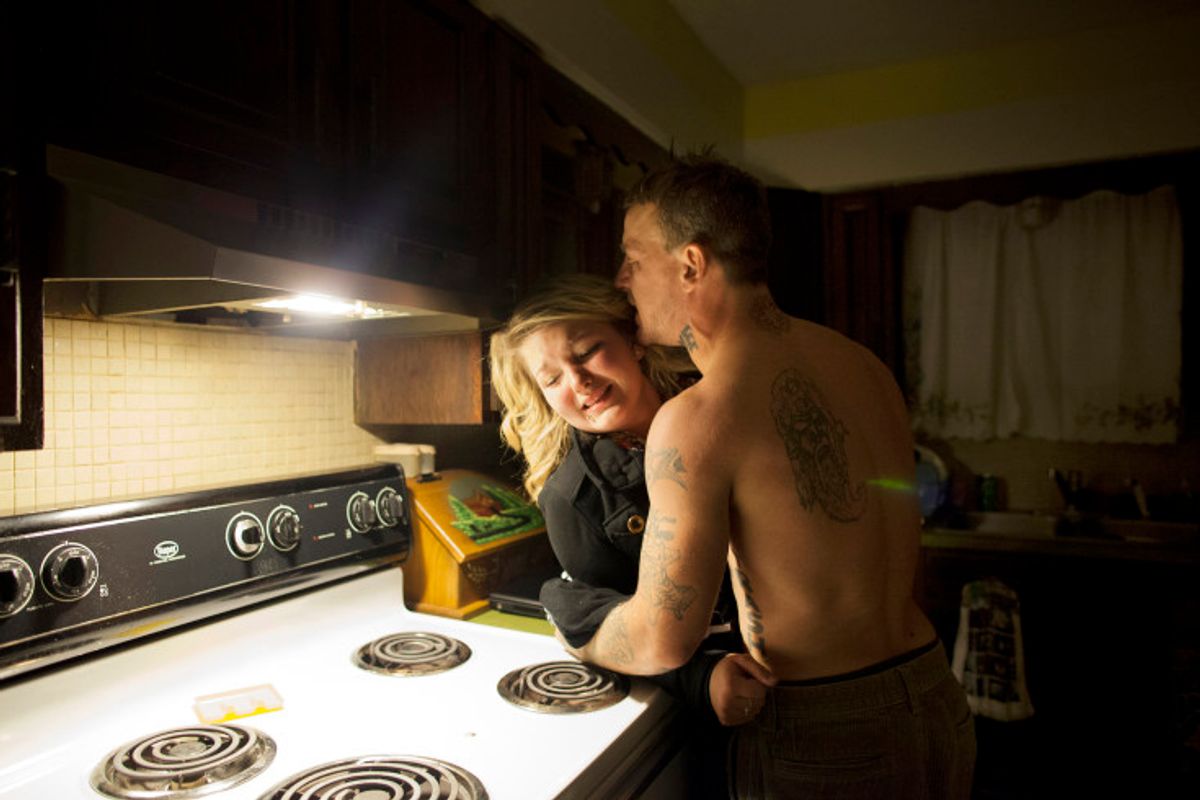 "Are you listening to me?!" Shane screamed. "Grow the f*ck up, Maggie! Grow the f*ck up!" (Sara Lewkowicz http://saranaomiphoto.com/ provided by Time)
--

This week, the Internet got angry at Sara Naomi Lewkowicz. The 30-year-old photographer had the audacity to photograph domestic violence – and to publish the photos in a major magazine just as Congress was debating the reauthorization of the Violence Against Women Act.

In the photos, we see a 31-year-old man named Shane throw his 19-year-old girlfriend Maggie against a set of kitchen cabinets. He traps her with his body against a kitchen counter. He chokes her. At one point, her 2-year-old-daughter walks in and stamps her feet as she sees what’s happening.

The Internet thinks this is Sara’s fault.

Sara’s photo essay, earlier called “Maggie and Shane” and originally published at fotovisura.com, was published Wednesday as “Photographer As Witness: A Portrait of Domestic Violence” in Time’s “Lightbox” photography feature. The 39-frame story is edited down from photos taken in three visits with the couple over roughly as many months.

Commenters at Time think Sara is unethical for not trying to stop the beating. They accuse her of voyeurism; of choosing “an awesome photo spread over critically need help”; of lacking empathy; of exploiting children.

It matters little in such heated discussions whether any of this is true – or demonstrably untrue (as much of it was when the comments were made). One example: Sara called 911. All of that takes a back seat, in these heated comments threads, to something much easier and more visceral: righteous blame.

Many of us are familiar with the phrase “blame the victim,” and there’s no shortage of that in the comments, at Time, on Sara’s essay. Here’s a sampling of the ideas you’ll find there: Maggie, the beaten girlfriend, should have seen this coming. Maggie stays because she likes it. Good riddance, Maggie was cheating on her then-estranged husband anyway ... etc. In classic form, one insists of Maggie, “She is not the victim. She is the perpetrator.”

If there’s a single thing about which the critics shouting about Maggie and Sara in Time’s comment section seem to agree, it’s this: The only adult in the house during the assault who isn’t responsible for the violence is the man committing it.

There are limitless variations on the lies people tell themselves about women like Maggie who are beaten by their partners. The truth is so much more straightforward: Women are abused by men who are abusers.

Abuse may have accomplices (e.g., drugs, alcohol) and catalysts (e.g., a bad day at work, a fight with the kid) but whatever context clings to the commission of abuse does not change something many of us apparently still can’t easily admit: Abuse is committed by abusers, who alone are responsible for their violence.

Sometimes this truth, too, has an accomplice: the camera. Donna Ferrato, the first person to extensively and visually document women who’ve survived domestic abuse, has been taking pictures like these for 30 years. No one ever wants to see them, she says, because they make people nervous, anxious. And for good reason. “The camera catches truth, in action, from all different sides,” she told me. It is “the most powerful kind of weapon.”

So maybe it shouldn’t surprise us that a young, female photographer who wielded such a powerful weapon against violence in a society that prefers to keep invisible, and that so often blames victims, finds herself, too, showered with blame.

To be sure, it feels like there are things missing from this story. Time opted not to publish details about the 911 call – made from Sara’s phone, which she had to take back from Shane in the midst of the fight — even though Sara had previously written them in response to an earlier round of this same controversy at fotovisura.com (where the pictures went up in December). Paul Moakley, Time’s Lightbox editor, told me he felt their written version, which said only that Sara was “confirmed” someone else had called 911, was “much clearer” without the extra details.

And I would bet that those who criticized Sara for the frame that includes 2-year-old Memphis crying in the kitchen as Shane beat her mother, those who argue that Sara should have put the camera down and removed the toddler from the danger, would feel differently if they knew what Sara told me: “When I took that, I pressed the button, it took like three frames of this little girl, and then the other adult was in the room picking her up and taking her out. It literally lasted a matter of seconds.”

In one caption, Sara writes that Shane tried to coax Maggie into the basement by offering Maggie two options: keep getting beaten in the kitchen, or they go “talk privately” in the basement. But there’s a clause that’s not in the caption: “What he said was -- he pointed at me at one point and said, ‘Because it’s none of her fucking business.’”

If you look at Sara’s full-body portrait of Shane before he begins hitting Maggie – neck tendons inflamed, muscles taut, mouth opened wide in a shout – you might guess that there would likely have been no conversation in that basement, that the violence would have escalated. “How bad” isn’t a guessing-game worth playing.

“[Maggie] just kept saying no, I’m not going down there with you,” Sara told me. “That’s the big thing I thought about – if he was willing to do that with a camera there, what would he be willing to do if they were alone? That scares me to think about.”

And something else: It may seem strange to say so, but there is also victory in Sara’s essay. Ann Jones, who has been writing about violence committed against women for the last 20 years, says the officers’ responses to the 911 call show progress. “The arresting officers here, judging by the captions of the photos, were great. That officer says to Maggie, ‘You know this is going to happen again. They keep doing this. They only stop when they kill you.’ When we started work on this in the battered women’s movement, police were taking the guy’s word for it, not taking a statement from the women, blaming the women for causing the situation in the first place, saying there’s no point in arresting because the women won’t press charges. Prosecutors weren’t pressing charges as they should have,” Jones remembers. “It was all on the women.”

There’s also victory of a kind for Maggie: She files a complaint against her abuser, and she leaves him, two things many women in abusive relationships are reluctant to do.

“People don’t give Maggie enough credit,” says Sara. “She left. I just wish the story would be about her, not me. I’m just a freaking photographer.”

But why confront our discomfort about images when we can instead confront the photographer? Why challenge the perpetrators who commit, and the structures that underpin, this violence when we can blame its victims – and, when the evidence of violence is still too powerful, its witnesses?

Maybe that’s too cynical. It is, at least, for Sara. “I’m excited that this is proving people want to talk about this. People want to address this issue. Bottom line, I think it’s got people addressing domestic violence.”