Pick of the week: A Cold War sub drama, from the other side 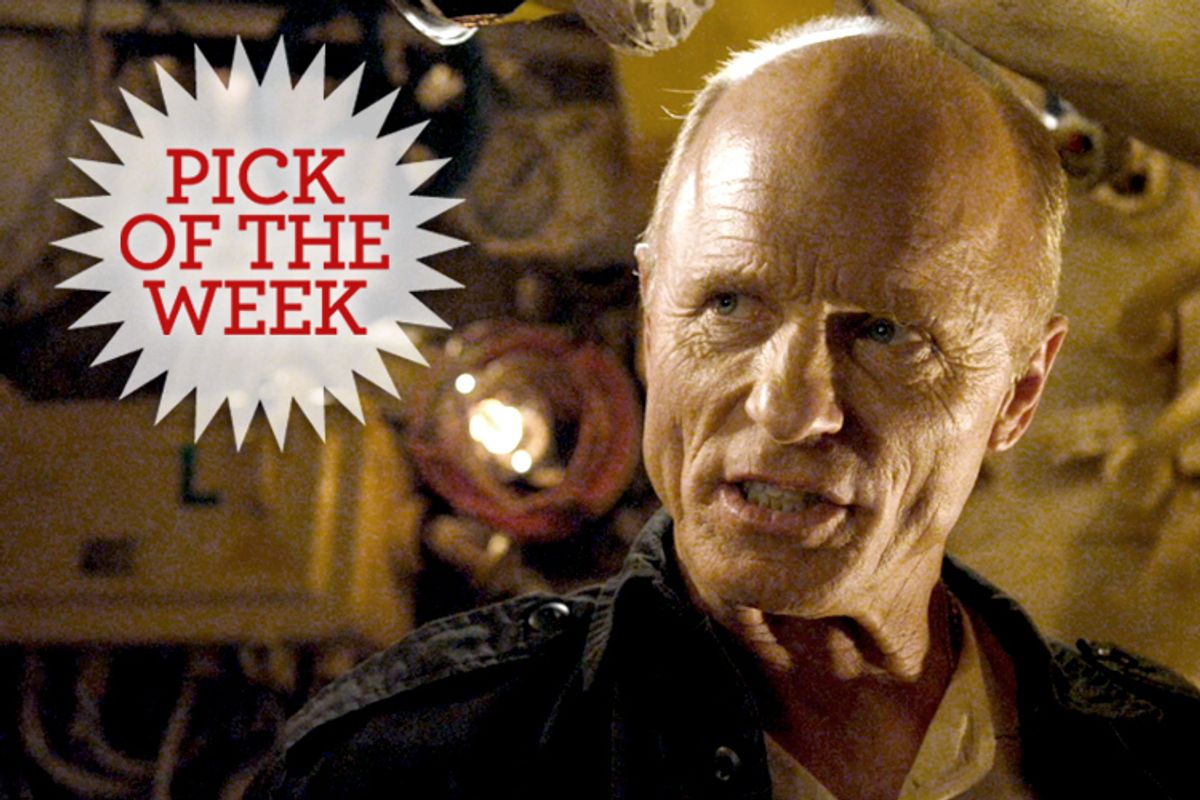 Am I seriously nominating an old-school, low-budget submarine thriller, with Ed Harris and David Duchovny playing Russians, as my favorite movie of the week? I know it’s a little eccentric, but sure I am. For one thing, I’ve already aired my objections to Park Chan-wook’s unintentionally campy Goth-drama “Stoker,” which is no doubt a better film on various technical and theoretical levels but also felt fundamentally empty. But even given its overly familiar story about a Soviet sub going rogue at a moment of heightened Cold War tension, writer-director Todd Robinson’s “Phantom” has a pulpy B-movie intensity and economy to match its cast of quality character actors.

It doesn’t hurt that “Phantom” has its roots in a real Cold War episode that has never been explained in public and which (at least according to some reports) became one of those issues the Americans and Soviets later agreed was better forgotten about. In March of 1968, a midsize Soviet submarine known as K-129, which was armed with nuclear missiles, went missing in the middle of the Pacific Ocean, provoking reactions on both sides that were somewhere between disquiet and panic. You can go read about the whole episode right now on Wikipedia if you like, including competing theories about what happened, but given that Robinson’s film offers a particular interpretation, I won’t get more specific.

Certain aspects of the real story have been fictionally amped up here, “Argo” style, but in general terms Robinson’s screenplay is built on a plausible but unproven hypothesis developed by military historian and sub buff Ken Sewell. Without totally giving the story away, we can say that Sewell has proposed that the fate of K-129 and its crew was tied to an internecine struggle within the Soviet leadership that pitted the KGB, the military and the Communist Party against each other. This was a period of high tension in the Cold War, after the Khrushchev thaw but before the Nixon-Brezhnev détente of the 1970s, when the United States was perceived (at least by the Russians) as having seized an insurmountable technological advantage.

At any rate, we’re really not talking about an “Argo” situation, where the facts behind a previously misunderstood event are now clear, and a screenwriter decides to jazz them up with elements of formula thriller. You could argue, in fact, that this movie is closer to “Zero Dark Thirty,” in the sense that the endpoint of the narrative is known, but how we got there is shrouded in mystery. In fact, though, the story of “Phantom” is no more than an intriguing possibility, with all the inherent drama, terror and claustrophobia of the submarine genre baked into it. I’ll admit I’m a fan of the sub movie, which for understandable reasons isn’t everybody’s thing: No women, confined spaces, challenging and often cheesy special effects. While Wolfgang Petersen’s “Das Boot” remains the undisputed genre champion (I would say), I also love the Clark Gable-Burt Lancaster WWII classic “Run Silent, Run Deep,” which I remember being absolutely thrilling as a weekday afternoon on KTVU in Oakland, Calif. If you’ve never seen Kathryn Bigelow’s underappreciated “K-19: The Widowmaker,” by the way, check it out – that’s the other English-language nuke-terror sub movie with Soviet protagonists, before this one.

I suppose there’s an adjustment involved in hearing Harris, Duchovny and the rest of the cast playing Russian characters and speaking in idiomatic American English, but it only took me a couple of minutes. I mean, what alternatives are there, short of actually making the movie in Russian? Do you really want to see another one of those movies with a mismatched cast of more-or-less European actors performing with Boris-and-Natasha accents to remind you that they’re not Our Guys? Harris plays a burned-out sub commander on the cusp of involuntary retirement, who gets sent out into the Pacific on short notice with a rickety old diesel-powered sub, an improvised crew and classified orders from Moscow. Those orders have something to do with Duchovny’s character, an elite KGB agent in civilian dress who’s coming along to test some top-secret new technical equipment in mid-ocean.

Those two are the principal adversaries – the pragmatic Navy vet vs. the ramrod ideologue – as it gradually becomes clear that Duchovny’s character is playing a more complicated game than it appears, and that he’s picked Harris and his low-tech boat for a reason. But the ensemble cast offers other highlights, most notably the always terrific William Fichtner as the sub’s second-in-command, a rising Soviet Navy star who’s about to get command of a snazzy new nuclear-powered sub. He has to decide where his loyalties lie, in a society where making the wrong choice about whom to obey can taint not just you but everyone in your family for the rest of their lives. In fact, without any anti-Soviet polemics or detailed exposition, Robinson conveys in miniature the agonized dynamics of survival in a culture run by oligarchy, bureaucracy and secret-keeping. (Johnathon Schaech is also good, in a Stalin mustache, as the boat’s “political officer,” aka resident Party informer.)

As you’ve probably deduced by now, the basic plot of “Phantom” is one that recurs in numerous military thrillers set during the Cold War: Will the crazy people bring us to Armageddon before the sane people can head them off? Viewed from one angle there’s no drama to this question 40-odd years later, but from another it remains unanswered. In this classy, taut white-knuckler – largely shot inside a real-life decommissioned Soviet sub – Robinson asks us to consider more than the hypothetical possibility that the world nearly ended in 1968. He reminds us that we have no idea how many other near-misses may have happened in the behind-the-scenes history of the modern age and also, more troubling still, that long after the Cold War has faded into memory we continue to have difficulty telling the crazy people from the sane ones.