The online university of spam

How a bizarre email from BachelorsDegreeOnline.com exposed the sleazy side of for-profit college recruitment 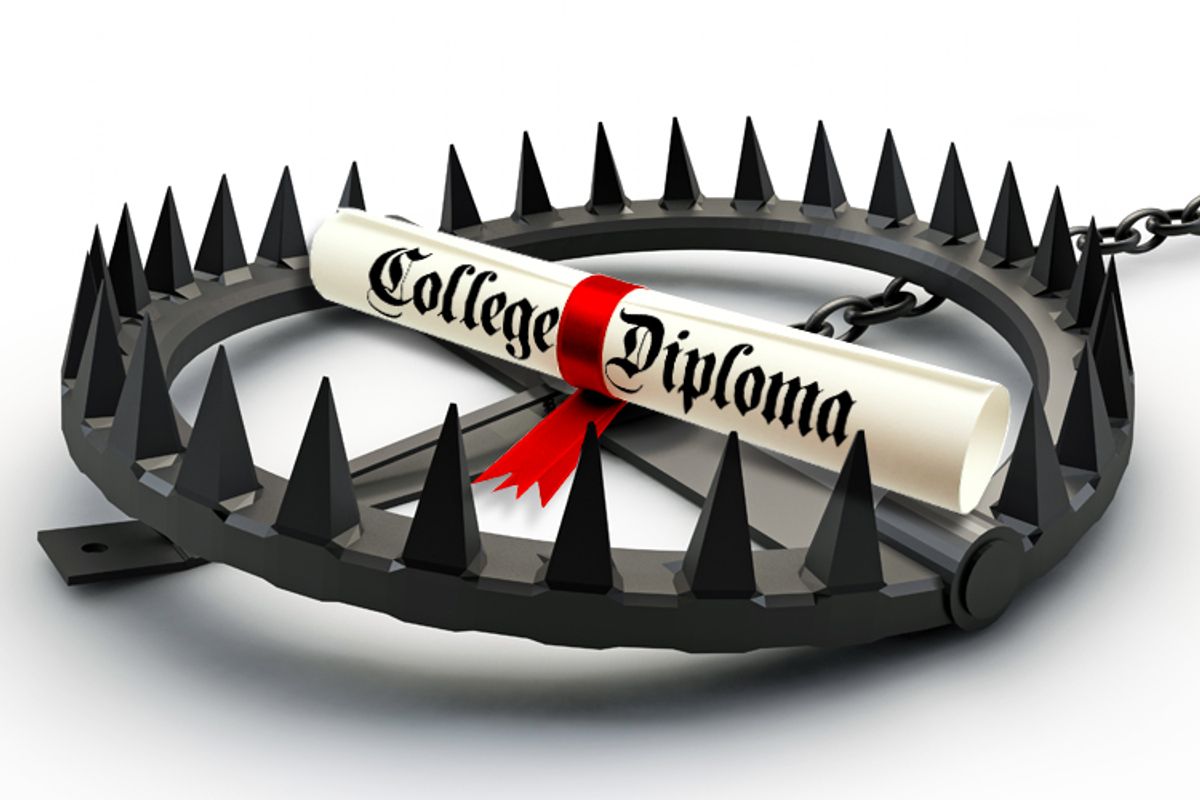 My journey into the sleazy heart of for-profit college Web marketing began with a weird email. It ended with a huge waste of taxpayer money.

The subject header: "Link Removal Request." The sender: "Janelle Goodman," who billed herself as "a representative" of the "compliance team" at an outfit called BachelorsDegreeOnline.

Goodman wanted me to remove a link from my site, which she identified as keilarowski.com/get-almost-any-book-for-free-100-kosher-sites, to her site, BachelorsDegreeOnline.com. She politely informed me that the request was part of a "process" in which BachelorsDegreeOnline was "looking to clean up some of our content and our backlink profile to ensure that we are in full compliance with Google's recently updated Webmaster Guidelines."

"We thank you for your time and are available to answer any questions about this process you may have," wrote Goodman.

Since I had no connection whatsoever to the "keilarowski.com" site and I have never linked to BachelorsDegreeOnline, I wrote back to Goodman and expressed my befuddlement.

She didn't respond. A week later, another representative of BachelorsDegreeOnline.com, "Amy Davidson" (using the same email address as Goodman), sent a nearly identical email to "remind" me of their previous request.

I wrote back again, expressing my confusion in somewhat stronger (one might even say hostile) terms. Why was I getting spammed with senseless link removal requests? Again, no response.

If the emails were indeed spam designed to drive traffic to BachelorsDegreeOnline.com, well, all I can say is, they worked. I decided I had to learn more about the site. At first glance, it seemed like a helpful kind of place,  pledging with a heavy dose of altruism that it was "interested in providing the knowledge and guidance you need to select the right [online education degree] program."

But finding out anything more turned out to be a chore. BachelorsDegreeOnline provides no contact information on its website. Its "about page" lists no staff or physical location. Its domain name registration details are hidden from public view via a company started by GoDaddy.com's founder, Domains by Proxy. Requests for more information sent to an "info@bachelorsdegreeonline.com" email address were never answered. Extensive Googling revealed zero substantive information about the site, while instead turning up hundreds of pages packed with expertly search-engine-optimized content designed to attract anyone looking for information on online degrees in a wide variety of educational fields.

Normally I would assume that such a site was designed simply to push ads to the traffic lured via search engines. The best thing to do with such bottom feeders is ignore them. But my curiosity was further piqued by the fact that as far as I could tell BachelorsDegreeOnline.com served no ads on any of its pages. So what was the business model? Who in the world was BachelorsDegreeOnline.com and why was the site going to such lengths to protect its secrecy?

The answer, best as I can tell, is that BachelorsDegreeOnline.com is a site designed to gather personal information from people interested in pursuing online degrees. My theory is that it  makes its money by selling that information -- referred to in the college recruiting business as "leads" -- to for-profit colleges. A potential explanation for all the secrecy? For-profit college recruitment is a massive ripoff of taxpayer dollars. Whether or not you or I ever use BachelorsDegreeOnline, we are indirectly subsidizing its manipulative operations. BachelorsDegreeOnline represents itself as a clearinghouse for useful information but its real purpose is to steer unsuspecting marks to clients who pay for its services. The closer you look, the uglier it gets.

Here's how it works. BachelorsDegreeOnline.com includes hundreds of pages with information about everything from film noir to military history to Christian studies to computer engineering. But the obvious primary goal of the site is to get people to use its "Degree Search" feature. There are three steps: You choose a degree level, a category and a subject. So, for example, you could look for an associate's degree in Computers & IT with a focus on computer programming. Or you could go for a bachelor's in Arts & Humanities with a focus on military history. After choosing your categories, you click the "find now" button to get your match. It's a little like online dating.

Except it's rigged. I tried a dozen different configurations. Every single time except once, my recommended match was a for-profit college. Among the places deemed perfect for me were big names like the University of Phoenix, DeVry University and Kaplan University, and smaller, less-well-known schools like Ashford University in Clinton, Iowa, and Post University in Waterbury, Conn. The only exception to the for-profit rule I was able to discover was Liberty University, the conservative Christian school founded by Jerry Falwell, which has moved heavily into the lucrative area of online education in recent years.

The Degree Search is the bait. Then comes the hook. If you want to get "free information" about the particular school that is supposedly right for you, you must give BachelorsDegreeOnline your detailed personal information, including your name, address, phone number and whether you are affiliated with the military.

But there's a loophole! Grants given to members of the U.S. military for the purpose of furthering their education do not count against that 90 percent cap. What this means, essentially, is that every single member of the military who enrolls in a school enables that school to enroll up to nine more non-military students. The revenue-multiplier effect associated with military enrollment is for-profit college gold.

Boosting enrollment numbers by any means necessary is crucial to for-profit college profitability. Typically, graduation rates at the for-profits are abysmal. To keep the loan money rolling in, the for-profits must constantly replace the dropouts with fresh bodies. It's a process that costs a lot of money. A lot of taxpayer money. An investigation by Sen. Tom Harkin's Health, Education, Labor and Pensions Committee determined that the top 15 publicly traded for-profit universities spent 23 percent of their total revenue on marketing and recruitment. One for-profit school notoriously employed 1,700 staffers devoted to recruitment and only one employee working on job placement!

The make-or-break emphasis on boosting enrollment through constant recruitment has created a downstream opportunity for third-party "lead generators" such as BachelorsDegreeOnline.com. According to an investigation by the Senate HELP committee, recruiters will pay anywhere from $10-$150 per lead. (Presumably, military-affiliated leads command top rate.) A prospective student who is unwary enough to input his or her phone number into one of these sites can expect a prompt deluge of recruiter phone calls.

The revenue stream has led to a thriving industry of lead generators, some of whom have been playing fast and loose enough with their dubious marketing practices to attract government attention. The first target of an ongoing crackdown: lead generators who go after military personnel with websites designed to convey the impression that they were affiliated with the federal government. Last July, Quinn Street Inc., the operator of multiple such sites, included one titled "GIBill.com," agreed to pay a $2.5 million fine as part of a voluntary settlement with 20 state attorneys general.

Last September, four Democratic senators sent a letter to the Federal Trade Commission urging it to take "several steps to better protect consumers from deceptive lead generators ... we also encourage the FTC to create meaningful guidelines for lead generators and strengthen their oversight."

"Ensuring that students and their families have clear and accurate information about their post-secondary choices is essential and we urge you to take steps to protect them from misleading and predatory marketing."

Quinn Street's behavior clearly crossed ethical lines by deceptively representing its sites to military personnel. There's nothing so obviously transgressive to see at BachelorsDegreeOnline.com. But the unappetizing truth is that the for-profit colleges are channeling taxpayer money to third-party lead generators who are leeching off the taxpayer dime, while at the same time failing to be fully transparent about their relationships with the schools to whom they are directing prospective students. There are probably better uses for federal funds than the subsidization of de facto marketing and recruitment arms of the for-profit industry. We deserve better.

Then, on Thursday morning, as I was writing this piece, my phone beeped. @WideOpenEd, the Twitter account for BachelorsDegreeOnline.com, had followed me back! I pounced at this first sign of actual life. I notified WideOpenEd that I was on deadline writing a story about its site. A few minutes later, I received a cautious response wanting to know what my story was about. I responded that I was trying to figure out where BachelorsDegreeOnline fit into the world of for-profit college marketing and recruitment, and that I was also trying to understand why it was sending me link removal articles.

A couple of Twitter-delivered "Direct Messages" ensued. WideOpenEd acknowledged that it had "client relationships" with both for-profit and nonprofit schools. WideOpenEd also apologized for mis-sending me the link removal emails.

I sent a flurry of follow-ups. I asked for names of its nonprofit clients, and why "Janelle Goodman" and "Amy Davidson" hadn't responded to my emails. I questioned whether Janelle and Amy were real people and asked if their emails were actually spam designed to generate traffic. I also wanted to know who I was "conversing" with and the identity of the corporate owners of BachelorsDegreeOnline.com. I suggested that an interview via email or phone would be more convenient than exchanging 140-character Twitter messages.

As of press time, I have yet to receive an answer to any of my follow-ups. WideOpenEd has gone silent. Considering that my tax dollars underwrite their operation, I'm not satisfied with their answers.