Was Seth MacFarlane's shtick really sexist? Yes, and also no — he fell afoul of the mysterious rules of comedy 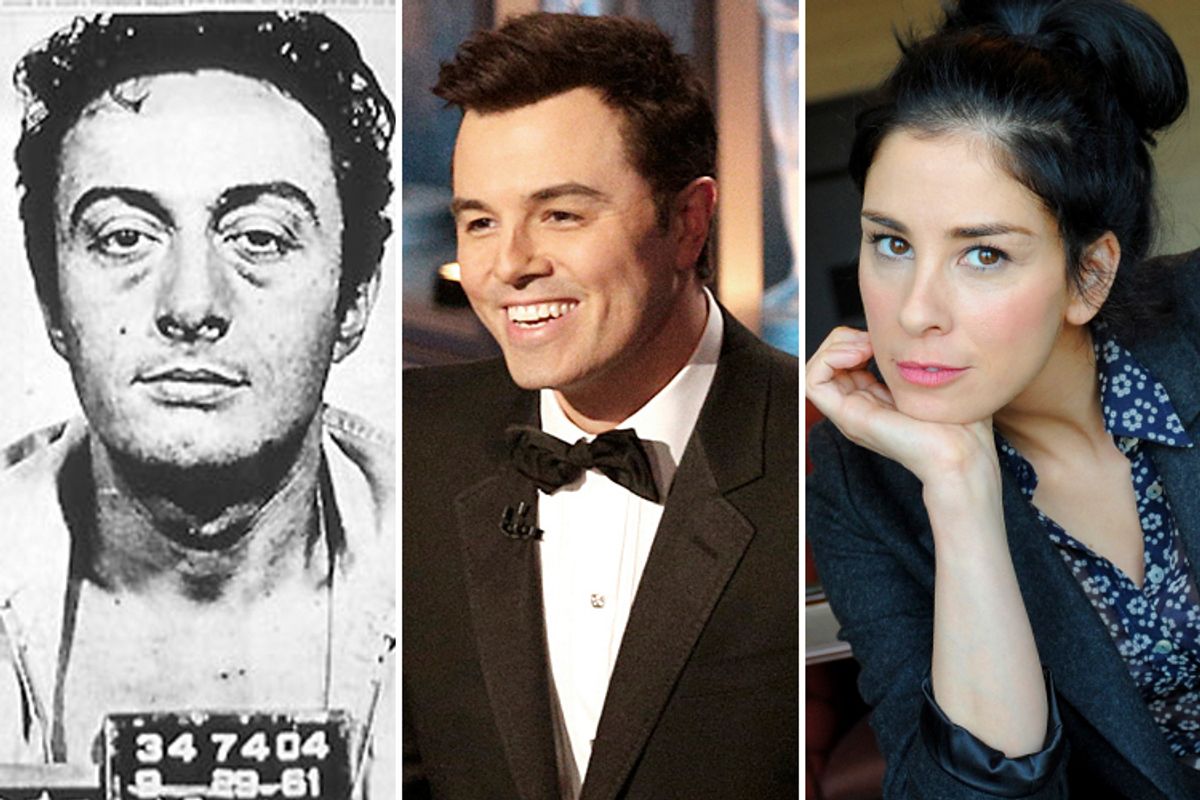 Humor is a complicated phenomenon, and highly dependent on context, as Seth MacFarlane recently learned. The Oscar host’s much-discussed performance – and in particular his quasi-ironic opening musical number, “We Saw Your Boobs” – has inadvertently launched a cultural debate about several interlocking subjects, including sex and gender in Hollywood, whether p.c. attitudes are destroying humor, and the role of Twitter and other social media during major cultural events. That’s without even getting into the unresolvable and inherently subjective question of what’s funny and what’s not.

Nothing MacFarlane did, from the boob song to gags in dubious taste about women’s weight, domestic violence, Mel Gibson and John Wilkes Booth, pushed anywhere near the outer edges of the comedy envelope in a world that has already featured Lenny Bruce, Andy Kaufman, Sarah Silverman and Sacha Baron Cohen. MacFarlane’s problem was about semiotics, setting and reception. He was a white guy in a nice suit doing old-fashioned song-and-dance numbers on the Oscars, and fairly or not he came across to many viewers as smugly reinforcing the male-centric power structures of Hollywood and society. (You can accuse those other comedians I mentioned of many things, but not of kissing up to power.) Some observers, like Pete Hammond of Deadline, have suggested that a double standard may be in play, and that Tina Fey and Amy Poehler could have cracked the same jokes, or worse, and not gotten any grief for it. That’s kind of true, but also misses the point. All humor has a subject and an object, and if Fey and Poehler tell those jokes they become different jokes with different meanings.

I’m not trying to answer the question of whether MacFarlane was a misogynistic goon sent to enforce the patriarchal order or a misunderstood satirist who fell victim to feminist groupthink. This is actually one of those cases when both things can be true; MacFarlane’s staunchest defenders and harshest critics have all made valid points about the competing signals being delivered on Oscar night. This points us back to the fact that comedy is one of the most poorly understood aspects of human behavior and psychology, and that it’s nearly impossible to explain what makes a joke funny, or what it’s actually “about.” To quote the Internet Encyclopedia of Philosophy (one of my favorite online resources): “Almost every major figure in the history of philosophy has proposed a theory, but after 2,500 years of discussion there has been little consensus about what constitutes humor.”

If anything, I think MacFarlane’s Oscar-night performance was too clever by half, and resulted in a profound failure of messaging and symbolism. As one female friend of mine succinctly put it, “Somebody else might’ve been able to pull that off, but that guy just looked like a frat boy in a tux.” To boil that 2,500 years of philosophizing about humor down to one sentence is obviously unfair, but here goes: Broadly speaking, most humor is either about expressing superiority over others, relieving tension and expressing forbidden thoughts, or expressing a surprising incongruity, as between expectation and reality. Many jokes involve a combination of these ingredients, of course, and one way of explaining l’affaire MacFarlane is that a whole lot of people experienced his humor as primarily being the first kind – the humor of mockery and abuse – thinly and falsely veneered with the second and third kinds.

Considering what we know about MacFarlane’s politics – he’s a liberal, an Obama donor, a supporter of LGBT rights, etc. -- it’s unlikely that he actually intended to come off as a sexist boor who was belittling women. Indeed, it’s possible he intended quite the opposite – but as any grad student in literary theory could tell you, artistic intention isn’t that important. His shtick was fundamentally confusing: What kind of comedy was the boob song – juvenile and sexist mockery, or institutional parody? Or both at once? And who was its intended target? Worst of all, the confusion evidently struck many viewers, especially women, as profoundly unfunny.

Even there, the question of whether MacFarlane bombed or succeeded comes with an asterisk leading to this footnote: “Depends on what you mean.” Oscar producers and the academy presumably hired MacFarlane in search of the brand of button-pushing, male-oriented satire behind his animated series “Family Guy” and hit movie “Ted,” not to mention the demographic that goes with it. Arguably that worked out fine. Ratings for the Oscar telecast were up a little this year (interrupting a long-term downward trend), especially among the advertiser-desired group of adults under 50. It may be too easy to read that as cause and effect, by the way: Over time, Oscar ratings correlate strongly with the popularity of nominated films, and this year’s best-picture nominees included six $100 million-grossing hits.

It’s safe to assume the producers knew there might be some backlash against MacFarlane, given that every aspect of this obsessively dissected and psychoanalyzed media spectacle is guaranteed to provoke outrage from someone, somewhere. But no one could’ve been prepared for the tide of collective anger – largely although not exclusively female – that began to swell within the first minutes of last Sunday’s broadcast, and then crashed onto the beach the next morning in some of the most damning reviews of recent Oscar history.

A scathing blog post by the New Yorker’s Amy Davidson – perhaps the most widely circulated day-after piece -- castigated the MacFarlane Oscars as a “hostile, ugly, sexist night” plagued with “misogynistic awfulness,” and for “a specific hostility to women in the workplace,” although I have to say she never makes a case for that one. Davidson reads “We Saw Your Boobs” as a derisive dismissal of female artistic ambition: “You girls think you’re making art, the Academy, through MacFarlane, seemed to say, but all we -- and the ‘we’ was resolutely male -- really see is that we got you to undress. The joke’s on you.”

Martha Lauzen, a frequent commentator on gender in Hollywood who runs the Center for the Study of Women in Television and Film at San Diego State, made a similar argument in an essay for the Wrap. “Rarely has such a high-profile cultural event so boldly and blatantly turned a deaf ear and a blind eye to the female half of the population,” she wrote. Lauzen also offers us a theory of humor as an instrument of power: “Those telling jokes occupy positions of privilege by commanding our attention and often disparaging members of other social groups. On Sunday evening, Seth MacFarlane, the Oscar production team, and the Academy – a group whose voting membership is 77 percent male -- clearly reiterated and reinforced who wields power in the film community.”

I think Davidson and Lauzen make compelling arguments on some levels and, more important, they captured and distilled the genuine outrage that so many women evidently felt. Indeed the “superiority theory” of humor that Lauzen references, which can involve using jokes as weapons against the less powerful, goes back at least as far as Plato and Aristotle, who both saw laughter as essentially malicious. As Thomas Hobbes put it, laughter “arises from some sudden conception of some eminency in ourselves, by comparison with the infirmity of others.” Racial, ethnic or regional jokes often rest on the listener’s presumed superiority to blondes or Poles or Texans or whomever. On a more sinister level, German audiences reportedly howled with laughter at newsreels of Nazi soldiers compelling rabbis to clean latrines with their beards. For a great many female viewers, MacFarlane’s blithe, Rat Pack-flavored patter wasn’t just a winking reference back to the jokes column in a 1966 issue of Playboy or whatever; it was a reminder that an enormous power imbalance endures both in Hollywood and in the larger society.

But no one who thinks or writes about comedy would argue that the “superiority theory” is the only strain of humor, or even the dominant one. Humor is just as often, or more often, used as a subversive tool by the relatively powerless, a weapon of symbolic rebellion. In an Op-Ed for the Advocate, Victoria A. Brownworth argues that critics like Lauzen and Davidson missed the entire point of “We Saw Your Boobs,” which was that, “in Hollywood, women — even when playing victims of violent crime — are reduced to the sum of their body parts, not the sum of their movie parts. But a man singing about ‘boobs’ just had to be bad and sexist and wrong. There couldn’t have been a satirical point being made.”

Brownworth is right that some Oscar viewers leapt right over the visible evidence toward ready conclusions – but in fact, I’m not inclined to believe that MacFarlane was actually making a stealth-feminist argument or that he was intentionally serving as hit man for Hollywood’s ruling male oligarchy. Furthermore, it doesn’t much matter, and the outraged response of so many people cannot simply be ascribed to humorlessness or incomprehension. In formal terms, the boob song was actually a different kind of humor entirely: It was a meta-joke, a parody of a bad Oscar musical number rooted in the comedy of incongruity, which is probably the most familiar variety. This too goes back to Aristotle, who observes that you can always get a laugh by setting up a conventional expectation and then delivering a twist. A good joke that functions this way requires us to make multiple cognitive shifts, and leaves us with an unresolved paradox. To cite an example MacFarlane would never dare to go near, consider Sarah Silverman’s famous joke about being raped by a doctor -- “which is a bittersweet experience for a Jewish girl!”

MacFarlane’s skit-within-a-skit involving James T. Kirk and the Los Angeles Gay Men’s Chorus was way too complicated an attempt at incongruous humor for the context of the Oscars, with little kids and Grandma and Ghana and Estonia watching. (It might have worked perfectly well on a Seth MacFarlane comedy special, where the framing was clear -- retro-flavored guy's guy, doing mildly self-mocking dude humor.) Indeed, he stumbled into a well-known problem with irony, which is inherently unstable. Anytime you say something you supposedly don’t mean, people are likely to take you at your word – and then you no longer control "what you meant" in the first place. Whether MacFarlane intended his shtick as absurdist or satirical humor is now irrelevant, because it came out as a more hurtful variety. At first he was playing an asshole tit-ogler on TV, a smirking enforcer of sexual norms in Joey Bishop garb, and then he became one.