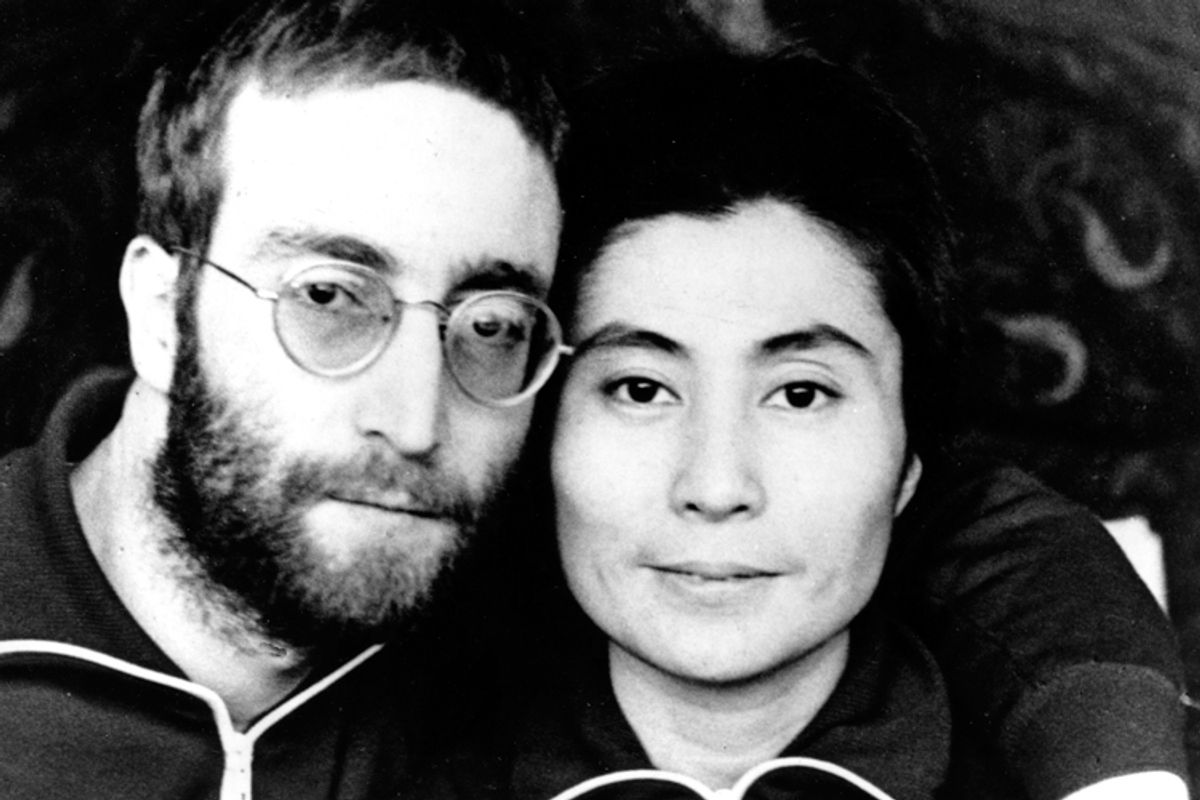 In 2000, a New York-based architect named Cass Calder Smith was helping his father move into a new apartment, when he discovered a tremendous inventory of interview tapes — hundreds of hours of conversations with the biggest rock legends. His journalist father, Howard Smith, had enviable gigs as both a New York City radio personality (for WABC, later WPLJ) and a star columnist at the Village Voice during its heyday, in the late 1960s and early ‘70s, when every revolution — sexual, anti-war, civil rights, gay liberation— was not only at its height, but converging. Unflappable, immensely knowledgeable, and sharp-witted, he earned the confidence of his subjects — people like Mick Jagger, Dennis Hopper and Peter Fonda (freshly returned from Cannes, after the premiere of "Easy Rider"), Frank Zappa, Eric Clapton, Lou Reed, John Lennon and Yoko Ono, and Jerry Garcia (though Howard admits to John Lennon in an interview that he's not a fan of the Dead) — who spoke with him, on repeat occasions, often at a crucial juncture in history, or in their lives, and opened up at length and with rare candor. These original reels from the interviews, which were conducted for Howard Smith’s column and radio show, were packed away in boxes, untouched for 40 years, in the back of his West Village loft. Howard Smith, now 76, and fighting cancer,  confessed to Ben Sisario in the New York Times in November that he’d kept them around, half-hoping to use them for his memoirs, thinking they would be “a good memory jogger. Things were happening every day that were just incredible.”

The journalist’s son spent several years cataloging and digitizing the tapes before seeking out a collaborator, producer Ezra Bookstein, to help him assemble “The Smith Tape” project, which has taken them more than decade to curate and produce. Since November, they've been releasing the collections digitally every month, organized by subject, a half-dozen interviews at a time, providing a 30-second narrated introduction to give historical context, and selling them on iTunes for $13.

On March 12, Collection No. 5 goes on sale: Its main focus is the events leading up to and those following the infamous Altamont Speedway Free Festival in California, in December 1969, which was headlined by the Rolling Stones — it was intended to be a Woodstock West. As we now know, over 300,000 people attended, and it was a total distaster: Chaotic and violent, four people died at the festival, including one by homicide at the hands of the Hells Angels, who were hired as security detail for the Stones. On this collection, you'll find two interviews with the Stones, and one with just Mick Jagger, in advance of the 1969 festival. In the aftermath of the violence, Howard also sits down with Sandy Alexander, the president of the New York Charter of the Hells Angels, as well as with Grateful Dead's Jerry Garcia — the band decided not to perform at the last minute, due to the escalating violence.

But the excerpt we have here is something else entirely: It is one of five intimate conversations Howard had with John Lennon and Yoko Ono (who turned 80 on February 18), who met with him in their St. Regis Hotel room in Manhattan, less than a year before the couple would settle in New York City, and the day Lennon's album "Imagine" hit the shelves. A month later, on Lennon's 31st birthday, the album would hit No. 1 on the Billboard charts, and become his best-selling album for the next decade. On it is a track, entitled "How Do You Sleep?," in which Lennon responds acidly to McCartney's song, "Too Many People," from his solo album, "Ram," which came out a month earlier — a kind of precursor to Jay-Z vs. Nas rap wars. Lennon can't quite anticipate McCartney's response — or his fans', for that matter — but suffice it to say, it only exacerbates their rift, and earns him few sympathizers.

Here are the two songs in contention.

Howard tells John: "A lot of people called (into the radio show) and said, 'What happened to his sense of humor?'"

John: "I'm sure Paul will understand this, and George does, and so do I, that that song ... is a moment of anger. I just put it down on paper. I'm also answering Paul's last album, which most of you, because he didn't hand out a lyric sheet, don't know what he was saying. It starts off with, 'too many people going underground, that was your first mistake,' and the first mistake there is referring to us and/or the others, about 'you took your lucky break and broke it in two.' Now if that doesn't mean what it says, I don't know what. Also the song ends with 'We don't believe that we can't be wrong.' So I wrote a reciprocal song. And I think that some of the funniest lines on the album are 'the only thing you done was yesterday,' and that was actually [Allen] Klein's line, one line of it.  'And since you've gone you're just another day.' I think it's the funniest thing ever. I don't think that about Paul all my life or all the time, I wrote it in an immediate response to when I heard his messages coming off his album. You mightn't hear them, but I can hear them. .... It's an angry song. It's not serious. If Paul is really, really hurt by it, I'll know by the vibes coming around, even if he doesn't call. I'll explain it to him, I'll even write to him, if he really, really thinks it's really, really serious. But I think it's quite funny and I was laughing while we were making it and when we were listening to it. I was laughing at his later ..."

Yoko: "John and Paul are very close to each other and when they're doing a session and all that, they used to always kid each other with words that may sound harsh to other people objectively, you know what I mean, so I think it would have sounded very different to Paul. Like slapping your back, like that kind of humor."

In another exchange, one particularly brave and occasionally funny, Howard takes on the couple's insistence on being inseparable (Note: Yoko describes an inability to grasp why it wasn't okay to bring John to a women's consciousness-raising meeting). The Lennon we encounter here is cheeky and defensive, charmingly funny and smart, loving and respectful of Yoko — but he's also quick to cut her off. Those well-acquainted with Beatles-ianana may well know that Lennon was having affairs, that the couple would separate for a year, and that he would have an 18-month relationship with the couple's personal assistant May Pang (at Yoko's urging), from 1973 until 1975. But at this moment, they were determinedly co-dependent, and it annoyed everyone around them — friends, fans, and the media.

Howard: "Can there be such a thing as being too close?"

John: "They're all brought up to think that a couple, you mustn't give a child too much love; a couple mustn't be together too much; it's good for the husband to be working in America while the wife's in Brazil. We don't believe all that jazz. That's just some social Christian jazz that somebody must have laid on us a few generations ago. You can't give a child too much love. And if you love somebody, you can't be with them enough. There's no such thing. We don't want to be apart ... We can live without each other if people want to know that, but we don't want to. It's just too good. Because we are 'mind people,' I thought it was just because I was an only child or had step-sisters or lived alone. I was always tripped out on my own or in books or something like that, you know. But she had sisters and brothers, but she was a different age group from them and she was pretty lonely, I guess. We're both conceptual people in a way ... We don't have to be apart to get away from each other. We really like being together all the time. And what about Sonny and Cher, or Liz and Richard? I don't think they're ever apart?

Yoko: I went to this women's meeting or whatever, and I suddenly realized that all these people. You see, at the women's meeting, they said, come alone, this female lib thing. So I said, no, I don't go anywhere alone, I have to come with John, I like to do that. And finally they said, okay, do come with John.  So we went together. And later, somebody criticized me for being arrogant.

John: For taking me along.

Yoko: Right, to even ask that I'd like to do that. The point is, you didn't have to let us come, we didn't force him in the door. They said alright in the end ... they can never forgive me and they can never make me part of them because i'm married to John and … that means I'm not independent or whatever. Every person can have his or her own bag. We don't all have to be alike. We can't be … We just have to realize our own bags. I wish they would understand that ... Let us be as we are. It's ridiculous. To make some fantastic, you know, kind of theory out of us is ridiculous, well this is a sign of dependence or whatever. Both of us are very strong people, and also very vulnerable ...

John: ... There were times when I spent as much time with George, Paul, and Ringo as I did with Yoko. I mean I slept with them in the same room in twin beds, of course, on tour, and I lived, ate, and breathed with them for five or ten years. Nobody said that about four young fags living together. [Laughs.] But between a man and a woman, oh my goodness, what's going on there with each other all the time? There must be something perverse about it.

Yoko: It's not fashionable I suppose.

You can listen to both exchanges in full on this streaming excerpt, prepared exclusively for Salon.

An annotated table of contents for Collection No. 5. Each interview runs approximately 30 minutes long:

1. Rolling Stones Press Conference #1 Oct. 27, 1969:  The Stones arrived in L.A. 10 days ago to finish recording "Let It Bleed" before embarking on their 1969 American tour. It’s their first tour in three years. They answer questions about the tour, politics and the growing crowds at music festivals.

2. Rolling Stones Press Conference #2 Nov. 26, 1969: In New York, nearing the end of their tour, addressing questions about the tour’s ticket prices and their plans for a free concert in California.

3. Mick Jagger Oct. 29, 1969:  Just arrived in L.A. sick with tonsillitis. He and Howard discuss the high ticket prices, writing hits and the band’s decision to come on tour.

4. Jerry Garcia Feb. 11, 1970: Garcia opens up about the group’s extended family and friends, how they spend their money, and the specific kind of fans they attract. They also discuss Woodstock and Altamont, and the nature of rock and roll.

5. John Lennon and Yoko Ono at the St. Regis Hotel Sept. 9, 1971: John and Yoko discuss and defend spending all of their time together and never being apart, the importance of art in society. They clarify his rift with Paul, and whether they would ever play as the Beatles again. John talks about Yoko’s inspirational influence on his artistic life.

6. Hells Angel May 8, 1970: Howard speaks with Sandy Alexander, the president of the New York Charter of the Hells Angels, discussing, among a host of other things, what happened at Altamont and what the Hells Angels stand for.

Click to purchase the individual collections or the limited edition boxed set.