"Wave": A family vacation turns into the worst kind of nightmare

The author survived the 2004 tsunami, but she lost her parents, her husband and her children 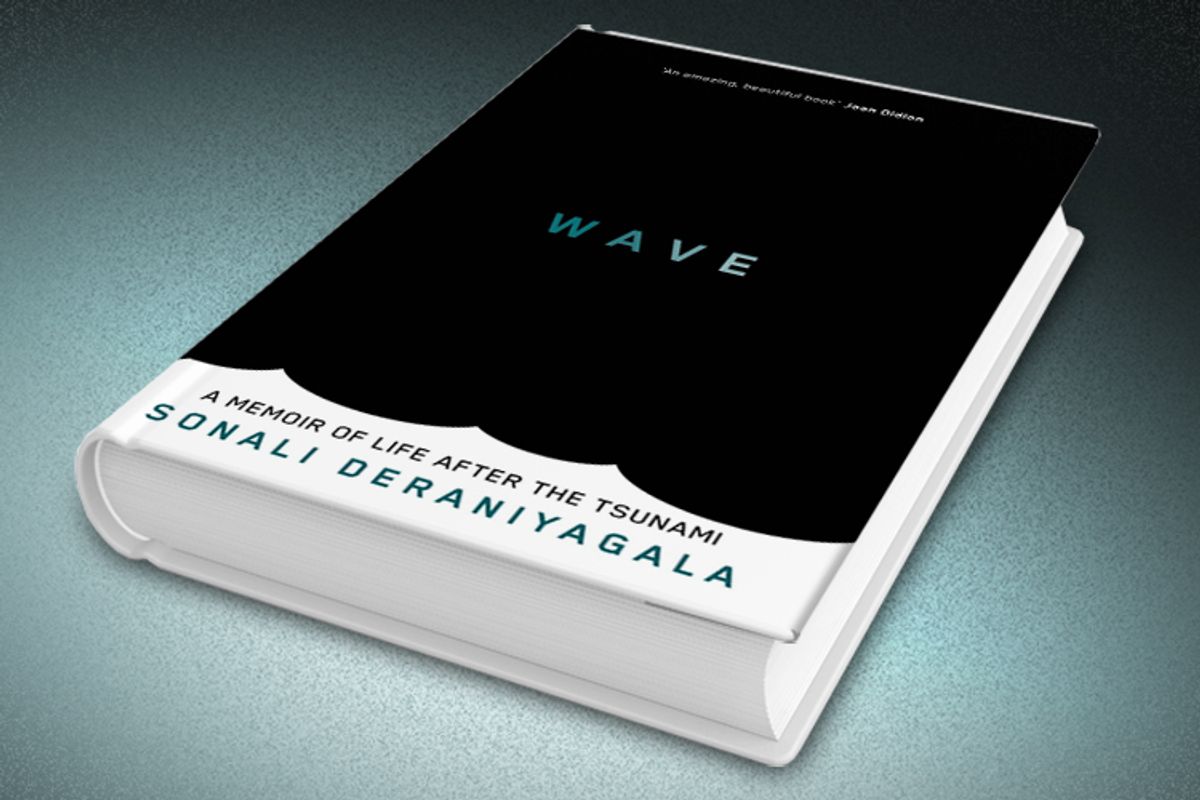 The first time Sonali Deraniyagala heard the word "tsunami," she was shut up in a darkened bedroom in her aunt's house in Colombo, Sri Lanka. It was 2004, and the wave had just taken her parents, her husband and her two young sons.

Deraniyagala had been vacationing with her family in a seaside hotel near a national park when, through a terrace window, she saw the sea rising rapidly past its familiar bounds. With her husband, Steve, she grabbed Vikram, 8, and Malli, 5, and rushed out the door and up the drive. They jumped in a passing jeep, but soon the wave overwhelmed even that. The last time Deraniyagala saw her husband's face, he was looking in horror at something over her shoulder. Then the jeep overturned, and for Deraniyagala the next few hours were chaos, violence and filthy water, the tsunami tossing her miles inland and then sucking her out again. Just before she would have been swept out to sea, she grabbed an overhanging branch and felt the ground materialize under her feet. She never saw her family again.

"Wave" is Deraniyagala's account of this nightmare, but the tsunami itself only takes up a handful of this spare, radiant book's pages. The rest is what came after, months in that darkened room contemplating suicide, then a period of getting drunk every day and conducting a demented campaign of harassment against the Dutch family to whom her brother rented her parents' house. Deraniyagala, an economist at the University of London and Columbia University, had been living with Steve and the boys in London, but she wasn't able to set foot in their English house for two years.

The extremity of Deraniyagala's story seizes the attention, but it's the beauty of how she expresses it that makes it indelible. Who knew that the ranks of academic economics harbored a writer of such extraordinary gifts? Deraniyagala grasps that seemingly unteachable truth: just how much you can (and should) leave out when you have given your reader the one detail that will make your world real to her. "Wave" is a small, slender book, but it is enormous on the inside.

The narrative arc of "Wave" follows the evolution of Deraniyagala's grief. At first, she alternates between rage and numbness. In the hospital where victims gathered after the wave receded, she turns away from a weeping boy, silently fuming, "You stayed alive in that water because you are so fucking fat. Vik and Malli didn't have a chance. Just shut up." At her aunt's house, she recalls "pieces of me hovered in a murky netherworld, timeless day after timeless day."

Once she crawled out of bed, Deraniyagala initially recoiled from anything likely to remind her of the past: "I panicked if I saw a flower. Malli would have stuck it in my hair. I couldn't tolerate a blade of grass. That's where Vik would have stamped." On an errand with a friend, she looks at the hundred-rupee note in his hand and thinks, "The last time I saw one of those, I had a world."

Very slowly, external reality comes back into focus and Deraniyagala becomes a collector of relics, scouring the disaster site for her family's washed-up belongings and her parent's house for "a pencil stub with the end chewed off, perhaps, a scrunched up grocery bill, a hair floating across the floor, a squiggle made with a pen on a wall." The house has been emptied and cleaned, but at last she pounces on an overlooked doormat smudged with dirt. That grit and those bits of dried grass might have come off her son's shoes as he walked in from the garden. These objects are talismans to Deraniyagala, material proof that the life that evaporated so suddenly and utterly had really existed.

Deraniyagala's relationship to full-fledged memories is more ambivalent. On one hand, they were all she had of what mattered most to her. On the other, they seemed like gateways to the disaster of having to realize her loss all over again. "For three years," she tells herself once she gets back to England, "I've tried to indelibly imprint they are dead on my consciousness, afraid of slipping up and forgetting, of thinking they are alive." Even the sound of children's feet running on the floor upstairs can briefly trip an agonizing lapse. Finally returned to the London house, she finds a dirty plastic bowl in the backyard, a dish from which "Vik ate his first solid food, when he was a few months old, one spoon of baby rice mixed in water" that had been repurposed as a garden toy. "I don't rush outside to put it away where it belongs, in the shed with the rest of the garden toys. It wouldn't be mad or foolish to keep it indoors now."

As "Wave" goes along, however, Deraniyagala becomes better able to abide with her memories, and for the reader this means that Steve, Vik and Malli (as well as, to a lesser degree, Deraniyagala's parents) solidify into distinctive people. At first, they are just scrapers of dirty shoes, possessors of green T-shirts and collectors of cowrie shells -- all the fragments Deraniyagala shores up -- but as she allows herself more extensive recollection, the reader gets to know them. Malli, who shared his grandmother's taste for "glamour and flair," had an imaginary family who lived by a lake in "Merica." Vik, who agonized over cricket scores, carefully checked off a list of the birds he'd spotted in Sri Lanka. Steve, a working-class guy from London's East End, drank Chimay and listened to Coltrane while cooking dinner, and cheerfully endured his sons' complaints that his job as a researcher sounded "boring" compared to his own father's exciting career as a truck driver.

The result of this approach is that at the beginning of "Wave," we know about Deraniyagala's bereavement, but by the end of the book we feel it, or at least feel a shadow of her love for these irretrievable people. It's one of art's mysterious ironies that a book created out of loss makes the lost ones live for the first time in the minds of complete strangers.

In the book's climactic moment, Deraniyagala goes on a whale watching trip with a friend, and, miraculously, several curious blue whales investigate their boat: "There is a stir in the water, a foamy mass heralds the head that rises to the surface, its shape an ancient arch." First Deraniyagala can hardly bear it, knowing how ecstatic the encounter would have made Vik, but then "my want for wild wonder got the better of me." Maybe she wants it all the more because Vik can't have it. And then, in a twist that perfectly captures Deraniyagala's refusal to traffic in cheap uplift, "... A whale shits. A vast crimson slick slowly fades into the blue water. Ah, you should see this, Vik. All that krill." (Of course that would be an 8-year-old boys' favorite part.)

"They keep their hugeness hidden, these whales," Deraniyagala writes, "rarely revealing themselves whole to my eager eyes." She is the same; every stranger's innocently curious question about her family provokes a crisis. "It still seems far-fetched, my story, even to me. Everyone vanishing in an instant, me spinning out from that mud, what is this, some kind of myth?" Just a sad life, perhaps, in the same way that dirty old plastic bowl is just a piece of cheap discarded dinnerware. But the right person can transform it into so much more.