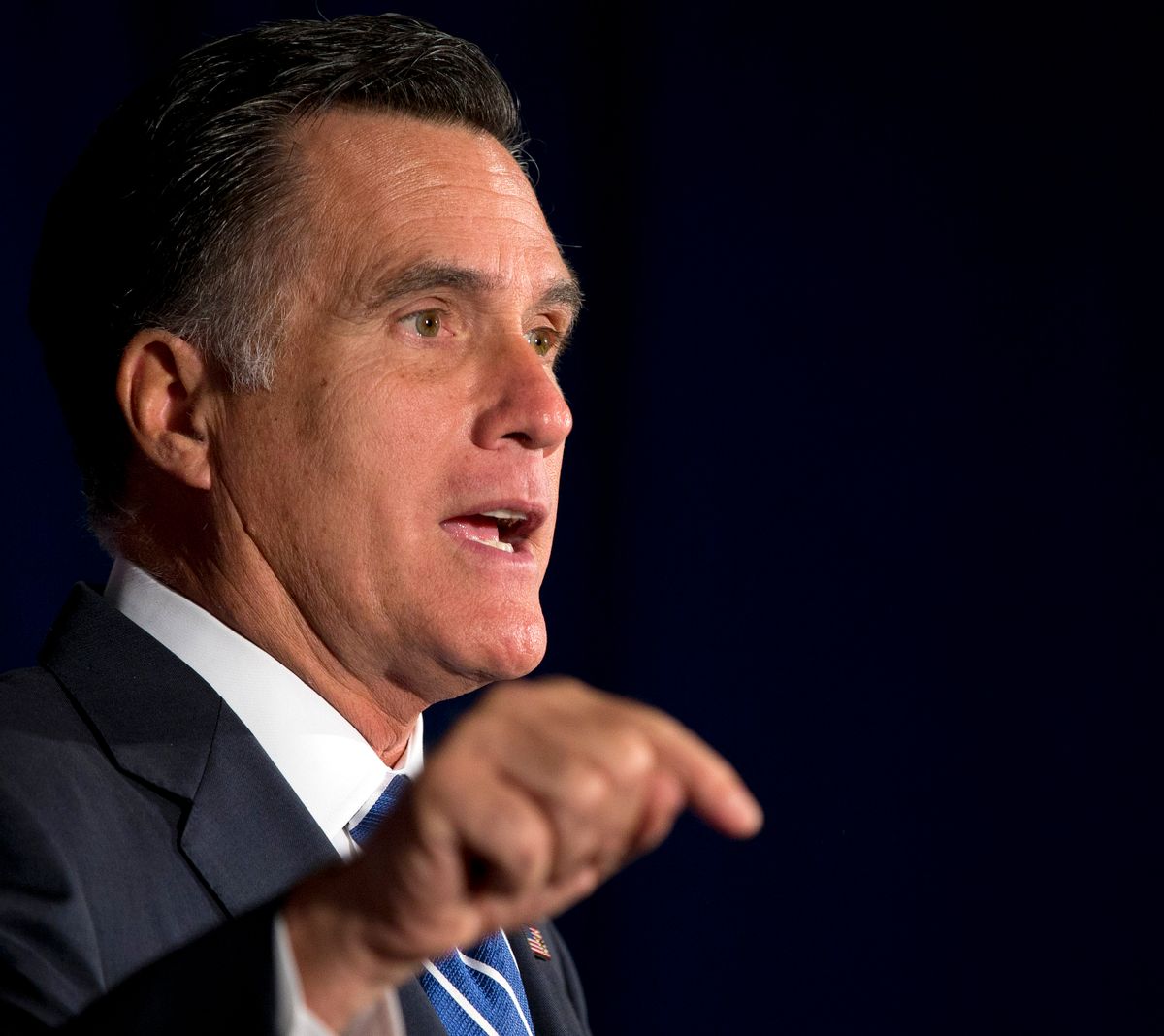 Mitt Romney is back. The former Massachusetts governor and failed Republican presidential candidate gave his first post-election interview to Fox News, and the results weren’t pretty -- though they were absurd.

Mitt and Ann Romney gave Chris Wallace of Fox News Sunday the honor of hearing them babble. From blaming minorities’ love of Obamacare to whining about their election loss, the interview was chock-full of ridiculous moments and quotes.

Here are six of them.

Given the fact that the Republican Party staked out a totally anti-Obamacare political position throughout the 2012 campaign, it’s striking to see their former standard-bearer blame the legislation for his loss. It is admitting political failure of the highest degree.

Mitt Romney told Fox News’ Wallace that “We did very well with the majority population, but not with minority populations, and that was a failing, that was a real mistake.” After Wallace asked him why, Romney added: “I think the Obamacare attractiveness and feature was something we underestimated, particularly among lower incomes.” As Think Progress points out, this comment “is reminiscent of the explanation he gave his donors for his defeat shortly after the election — Obama won because of ‘the gifts’ he gave to African-Americans, Latinos and young voters.”

2. Romney’s Heart Lies to Him

During the election, Mitt Romney was living in an alternative universe -- the same universe where most of the Republican base lived. Romney told Wallace that his “heart” told him he was going to win the election. His heart lied to him, then -- all the polls in the run-up to the election accurately showed that Obama would win.

“We were convinced we would win. We saw that the polls were very close, but we knew that the energy and passion was with our voters. My heart said we were going to win,” Romney said on Fox News. “It was a slow recognition, until ultimately when the Ohio numbers began coming in and they were disappointing, I said, 'Look, this looks like we lost.' Wasn't certain. Some people said, 'Oh, look, if this number comes in you could win,' but by 8 or 9 o'clock it was pretty clear that we were not going to win.”

Romney was reading too much of the conservative press and watching too much Fox News if he really thought he had a good shot of winning.

3. Mitt Romney Thinks He Could Be a Better Leader Than Obama

Washington, D.C., is bad now. Romney thinks he could have fixed it with bold leadership -- perhaps by slashing tax rates for the suffering wealthy and repealing healthcare legislation that helps out ordinary people.

Romney told Fox News he could have avoided the sequester. “I don't see that kind of leadership happening right now,” he said. “It kills me not to be there, not to be in the White House doing what needs to be done. It's hard.”

Ann Romney knows what made Mitt lose: the media! It wasn’t Romney’s 47 percent remark; nor the Republicans' insistence on austerity; nor their utterly tone-deaf positions on immigration. Nope -- the mainstream media was in the tank for Obama.

“I’m happy to blame the media,” Ann Romney said. “It was not just the campaign’s fault, I believe it was the media’s fault as well. He was not being given a fair shake.”

5. Our Campaign Also Screwed Up--By Not Letting Mitt Be Mitt

Ann Romney also engaged in a bit of hilarious reflection on how the Romney campaign was run. She thinks that if Mitt Romney was allowed to let his true colors show, he would have done better. Indeed -- more of those unfiltered remarks like his 47 percent speech would have really gone a long way.

Wallace asked her if she was upset by the Romney campaign’s unwillingness to “let Mitt be Mitt,” and she said yes. “Well, of course … it's true,” she said of the campaign keeping Romney from showing his true self.

Mitt Romney did not get the message from American voters. He vowed to continue to be engaged in political life, even when it’s clear the vast majority of Americans -- Democrats, for sure, but also many Republicans -- never want to hear from him again.

“I'm not gonna disappear. I'm not running for office …. but I care about America,” said Romney. “Sitting on the sidelines when so much is at stake is just not in my nature.”