Jake "The Snake" Roberts: "I started drinking when I was 11" 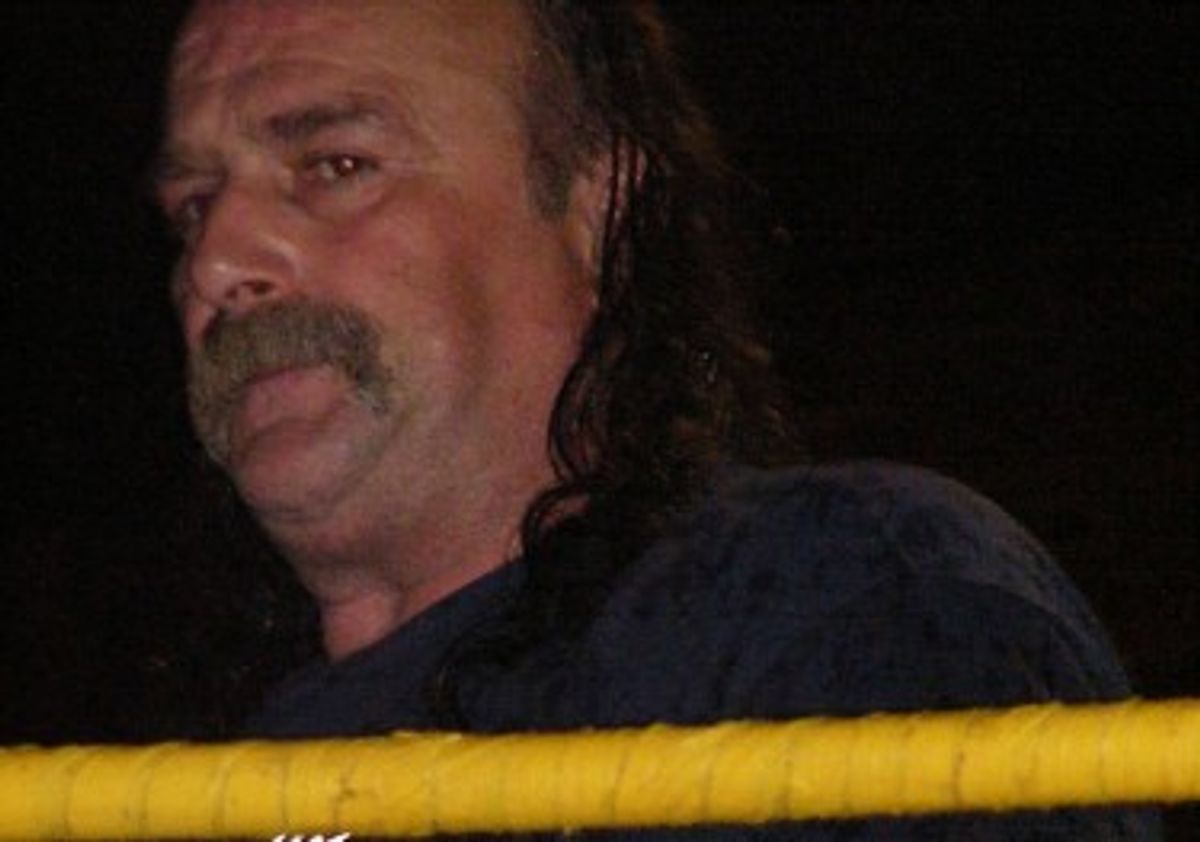 When it comes to the giants of pro wrestling, Jake “The Snake” Roberts (real name Aurelian Smith, Jr.) is right up there. From 1986-1992, Roberts wrestled in stadiums throughout the world with the WWE, winning immense popularity for his intense character, his in-ring psychology and his ever-present pet python.

But all the while, this dark public persona was being outmatched by his true-life troubles outside of the ring. Roberts frequently used drugs and drank heavily throughout his wrestling career, which ultimately led to him being fired from the WWE during a 1997 comeback attempt. A highly unflattering portrayal followed in the 1999 wrestling documentary Beyond the Mat, in which he was reported to have smoked crack in a hotel room after a reunion with his estranged daughter. As he began wrestling on the independent circuit—the equivalent of baseball's minor leagues—his behavior became increasingly erratic, including instances of drunken breakdowns in the ring and exposing himself to the crowd.

By last summer, he'd reached the point of contemplating suicide. It was then that he was contacted by former wrestler Diamond Dallas Page, whom Roberts had trained in the early stages of his career. Page first urged Roberts to try the DDP Yoga program he had recently launched, and ultimately invited his mentor to stay with him at his home in Georgia. Roberts has now been sober for longer than he’s ever been in his adult life, outside of prison or rehab. He’s currently training for a return to the ring at the age of 56, and chronicling that journey for an upcoming documentary.

In our exclusive interview, Roberts has plenty to say about WWE owner Vince McMahon, ballooning to 300 pounds then working out to lose it again, and why he thinks he’s ready to body-slam his demons once and for all.

Where are you now in your sobriety?

I’m at 104 days [as of February 22]. That wanting and craving to drink is gone for me now. I don’t know why it happened this time when I’ve asked for it 10,000 times before, but it feels great. Someone had even opened a bottle of wine at Christmas and I walked by and went, “What is that crap? It smells awful!” I’m also going to AA meetings every day. There was a point where you would have had to drag my ass to them, but it feels good to be there now. I’m one of them and want to be one of them. I’m finally starting to feel alive.

Did your drug use start once you entered the wrestling business? There’s a “Just Say No” poster of you from the ‘80s floating around.

Honestly, I felt nasty doing that poster, but you do what you’re told sometimes. I was using at the time and my drug use had started as far back as the ‘70s. I started drinking when I was 11 and had my first joint when I was 18. My grandmother was constantly pouring my grandfather’s drinks down the drain and I should have caught on right there that there was an alcohol problem in our family. When I was wrestling, beer and pot were my drugs of choice and I also did speed occasionally. I’ve been to rehabs and prison several times. No one in rehab or jail imagines that their life would end up like that, but it’s something that happens. I liked all that stuff, but it no longer became a choice to do it. It was a necessity. I was in a bad mood and underproductive and wouldn’t, couldn’t get up off the couch unless I had something to drink.

Vince McMahon is known for offering free rehab to any WWE wrestler, past or present. Did you take advantage of that?

I did, twice. I thank him immensely for it and wish I were in the same spot that I am now when they had contacted me and wanted to help. Even now, they’re helping by paying for my psychotherapy. That’s something which is incredibly expensive and I’ll need to do it weekly for years before starting to see the benefits. Not only that, but Vince has offered to help put the right people around me. The WWE doesn’t have to continue with these free rehabs and I’m extremely grateful they do. We’ve had our arguments and I’ve bashed Vince in some of my drunken, drug-filled rants, but he’s the smartest human being across the board. To me, he’s the caveman that came up with fire.

When you left the WWE and for the independent wrestling circuit, did the comedown contribute to your increasing drug use?

I still enjoy performing, whether it’s in front of two people or 2,000 people, but it’s not fun once you leave the big show. But the drinking and drugs was less about being on the independents and more about my body. I could hardly walk to the ring and couldn’t even open my hand. I love wrestling so much and to go out there and slap the business in the face was something I couldn’t do. I had to retire two years ago, but I didn’t want to go out that way. Don’t bet out a comeback, though. I’ve lost 65 pounds so far and am down to 242. During my prime wrestling days, I was anywhere between 238-245. I just had shoulder surgery two weeks ago and that’s definitely going to take some time, though. They’re telling me four to six months, but I’m thinking two months. I’m not wearing the sling they gave me after the surgery and the doctor couldn’t believe it. I was like, “Well, maybe my pain tolerance is a little better than yours.” [Laughs.]

You’ve credited former WCW wrestler Diamond Dallas Page with your recovery. You trained him as a wrestler; how did he get in touch with you again?

He just called and asked how I was doing, since he knew I was retired. I told him, I’ve got a little problem—and he’s the guy where if he finds a sore, he’s gonna pick it until it bleeds and then try to fix it. When I told him I was up to 305 pounds, he said, “You’ve never been that big before. You must be miserable.” It’s like, thanks! [Laughs.]

He told me about this new program he had created called DDP Yoga and just kept going on and on about how I should try it. I wasn’t interested, but finally just told him to send me the stuff. I was trying to get him off the phone so I could get my dope and my drinks. Eventually, I must have been bored, and opened up everything that he sent. Once I saw that it was an eating plan at first, I thought that I could do that. What I eat these days tastes so much better than what I ate back in the day, and I can eat tons of it. The only real concern was getting off the dairy, because I put cheese on everything, but I’m allowed to have goat or sheep’s cheese now.

What about when it got to the actual yoga workout?

I watched the DVD a couple of times and couldn’t get up off the couch at that point. If I fell on the floor, you literally had to help me get up. But once I had lost 10 or 12 pounds in the first two weeks, he wanted to come and see me. I was embarrassed and didn’t want him to see me in the state I was in. When he came out, he actually brought a cameraman with him and that really pissed me off. We did two moves and I had to sit down after five minutes. He didn’t say a word and just walked into my kitchen and started cooking. When he came back in, I said, “I’m gonna take this food and shove it down your throat, but we’re finishing this fucking workout.” I fell down a few times, but kept getting back up, and we ended up finishing.

How did the offer come about for you to live at this home?

He told me that if I lost another 20 pounds, I could come to Atlanta and stay at his place. I thought about it for a split second and took him up on the offer. I really needed to hear someone say that they were behind me. So now I’m in the “accountability crib.” If I screw up and fail a drug test once, I’m out of there. And I know this is my last shot. A lot of this is making sure you do the right things when you step into the danger zone, so I want to have all the cards stacked against failing. In my heart, I had reached a bottom. I learned about a special word called surrender. In the past, that word meant I was losing or giving up. Now I see that it means giving way to a new way, because what I had been doing for 56 years did not work out once, but when I surrendered to this, by God, I’m healed now. I’m doing the routine and the last six weeks have been so brutal because I haven’t been able to work out. If someone had told me two years ago that I’d be pissed off about not being able to work out, I wouldn’t have believed it.

Your fans also rallied through online campaigns to help pay for your shoulder surgery. Did that surprise you?

Absolutely. I’m a no-tech redneck and had no idea anybody was still even thinking about me. I was worried about having burned some of those bridges. It’s nice to know that I did something right along the way.