A former Tennessee Titan, now out, says his coach was asked whether Davis was a "ladies' man" 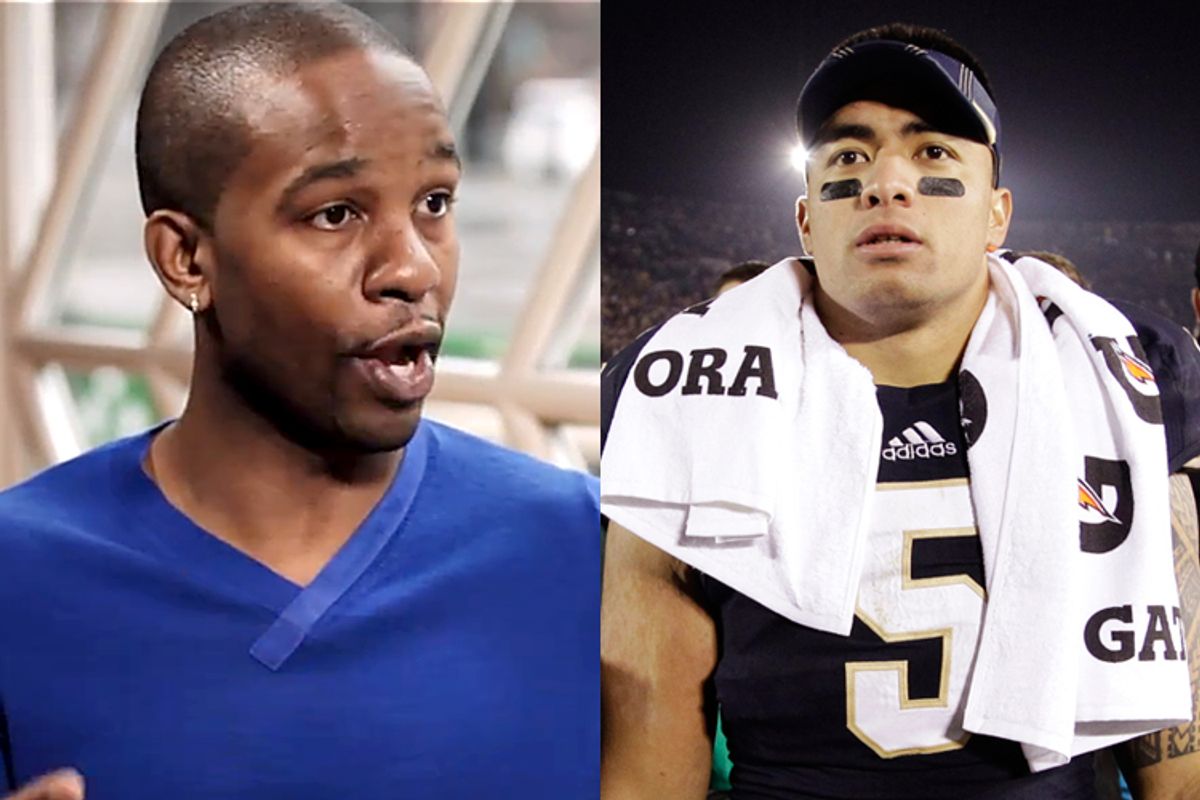 Wade Davis, the former Tennessee Titan who came out of the closet last year, wasn't surprised by an NFL recruit saying he'd been asked if he was straight.

After a football game in college, a pro scout asked Davis' coach, "Is Wade a ladies' man?"

"There's a certain cachet in being someone who seemed to be able to get girls," Davis told Salon. "My coach said, 'No, Wade isn't a ladies' man.' I immediately wondered if he'd seen through the mask I'd put up."

More likely, Davis said, the question, prohibited by law, wasn't based on any knowledge of the player's inner life: it was posed to all players, he said, in one way or another, long before this year's Manti Te'o scandal raised eyebrows about the Notre Dame star's fake girlfriend. (Te'o was reportedly asked by teams if he was gay, as well.) "They really do an exhaustive job learning everything they can," Davis said.

"NFL teams go through exhaustive measures to learn everything they can about a player. Because imagine if I'm drafting this guy in the first round; that's millions of dollars. There's an investment. Is he a troublemaker? Is he going to be out all night long? When you're meeting scouts, you put on your best side. But is what he's showing me through these interviews what he's going to demonstrate for three, four, five years?" Scouts may see a masculine-acting young man in interviews, but want to ensure that the men they recruit are straight -- or at least can stand up to direct questioning.

"They ask you like, 'Do you have a girlfriend? Are you married? Do you like girls?'" said University of Colorado tight end Nick Kasa in a recent interview with ESPN Radio. "Those kinds of things. It was kind of weird. But they would ask you with a straight face, and it’s a pretty weird experience altogether."

Said Davis: "I don't think [Kasa] knew what he was doing. He didn't have the foresight to think this was going to become what it became. Now that he understands the ramifications of what he said, he must be thinking, 'Shit, people are reading it this way and I still have to get drafted.'"

Because getting drafted -- and becoming the object of major investment -- is no small feat: "There's a huge power and privilege dynamic there. These athletes are very vulnerable. People think athletes have all this power, but they don't," said Davis. The likely reason for their disempowerment has less to do with anti-gay prejudice very strictly defined but a more insidious notion that gay men are "bad for morale." This after a Super Bowl defined in part by the culture war, in which a player for the victorious Baltimore Ravens said that they supported a hypothetical gay teammate, and a San Francisco 49er was widely criticized for saying the opposite.

"It's not as cookie cutter as just asking how this person is," said Davis. It's a question of, how's he going to fit in to the locker room?"