Larry King to Piers Morgan: Piers "talks about himself a lot"

As CNN struggles to reinvent itself, a famous alum has some advice for the network -- and the guy who took his job 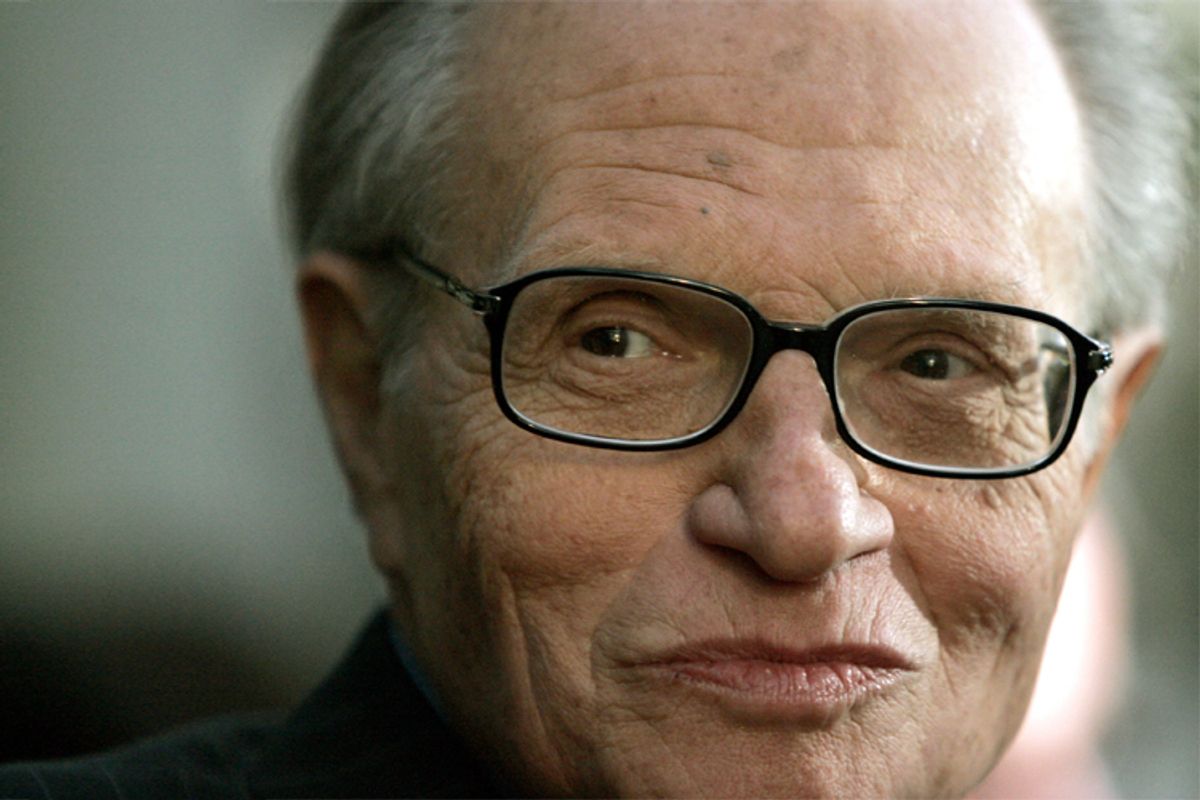 Larry King is currently the host of "Larry King Now" on Hulu and Ora.TV online -- after hosting "Larry King Live" on CNN from 1985 to 2010 (he was replaced by Piers Morgan). King's characteristic bluntness has landed him historic scoops -- famously, Ross Perot's announcing his intention to mount a third-party presidential campaign -- and, today, major guests for a Web-only chat show (which "airs" Monday through Thursday at 5 p.m.). He's spoken to Julie Andrews, Melissa McCarthy and Arianna Huffington in his first months on the air (the show debuted last July). A clip from his upcoming interview with Emmy-winning actor Jesse Tyler Ferguson is below.

As King's former employer rebuilds itself under the new leadership of Jeff Zucker, we spoke to the anchor about life in the news business.

Does Ora.TV, your joint Web venture with Carlos Slim on which "Larry King Now" is broadcast, allow you a lot of leeway editorially?

It's the first experience of my life where I am the suit. I have total editorial freedom. But I don't like to give opinions. I always felt the interviewer should be objective. I don't use the word "I" a lot. I started the first network radio show, I was at the first cable news network. I feel like I'm pioneering now.

Who pitched whom on the show?

I was semi-retired. I'd done a lot of years in the business. I was in my late 70s, with young children who are athletes. I wanted to go to their ball games. I have a nice home in Beverly Hills and I wanted to spend time there. But I was invited by Carlos Slim to speak to children -- he gives scholarships in Mexico City. He said he'd followed me for years. I had dinner there in Mexico City; then he invited me to go back to Mexico City to help open his art museum. My wife and I spent three days on his boat with some friends. In talking he said, how about something on the Internet, have a show, and not work that hard? We hired a great crew, including my executive producer from CNN, Wendy Walker.

Does it seem to you like broadcasting online -- rather than on cable or broadcast -- is the future of news?

Everyone tells me that. I know nothing about technology. I know the world is changing rapidly. But I don't know how things work; I don't know how I'm on the air; I'm amazed there are satellites. The creator of "CSI" told me in Miami that the future is what we're doing. I watch my show at home on my television set. I have Apple TV.

Television as we know it is going to change. There's no such thing as 10 o'clock Tuesday night anymore. But what I do is what I've always done, though the methods of delivery are different. Everything's changing rapidly. What I'm doing is a more comfortable setting. I'm intensely curious -- the kind of guy you would hate to sit next to on an airplane.

Does the continued growth of opinionated programming on cable news since you left CNN bother you?

It does trouble me. I am not a fan of it. I grew up with the likes of Huntley-Brinkley, Eric Sevareid, Walter Cronkite: people who left themselves out of it. The guests were not a prop.

Now, the guests are the prop for the host. I'll see the host on-screen more than the guest. Ninety-five percent of the time on my show, you should see the guest. I am a conduit for the audience. It [cable news today] is not to my taste. I don't say that it's wrong -- the public goes to what it likes. But I don't care what a host thinks.

It sounds like you're talking about Piers Morgan here.

Piers -- he talks about himself a lot. Sure, the guest gets to talk. But he does a lot of "I's". That's fine, but I'm not a fan of that. I don't like people who shout at each other. I realize it's dramatic, but it's not my cup of tea. I like him, but that kind of broadcast is not the kind of broadcasting that I dig. That's tabloidish to me. I don't mean this as a critique.

Are you building an audience at Hulu?

The people at Hulu tell me it grows with leaps and bounds every day. But people have gotta find us. More people now recognize it, but there are still people that say, "I miss you, where are you?" The industry grows so fast, you can't predict tomorrow. I certainly enjoy doing it. I just did three shows in New York. I enjoy the whole -- I've always enjoyed my industry, I've always enjoyed my business. I never had a goal to make a ton of money. My goal was to communicate. I had intense curiosity.

How do you think Jeff Zucker should remake CNN?

I have strong ties to CNN -- I'm still under contract to the end of June, I'm paid through the end of June by CNN [reached for clarification, a representative from CNN had no comment]. I wish them nothing but the best, I think Chris Cuomo is a great hire. They got the guy from ABC. The White House guy. [Jake Tapper] He's terrific. I like some of the things he's doing, he's very creative. I wish them nothing but the best.

Should they be worried about your program, or programs like it online, eating away at their audience?

I don't think they have to worry about it. But if I have a viewer who's watching me, they're not watching them. My friend, the late Jackie Gleason, when he went off the air, he had 32 million viewers. Today if you get a 3 share, you throw a party. Everyone has their own ball of wax. But I don't think CNN has to worry about it. Ora has its own, nice place.