"Switched at Birth" pumps down the volume

An all-ASL installment of the ABC Family series was smart, political — and quiet 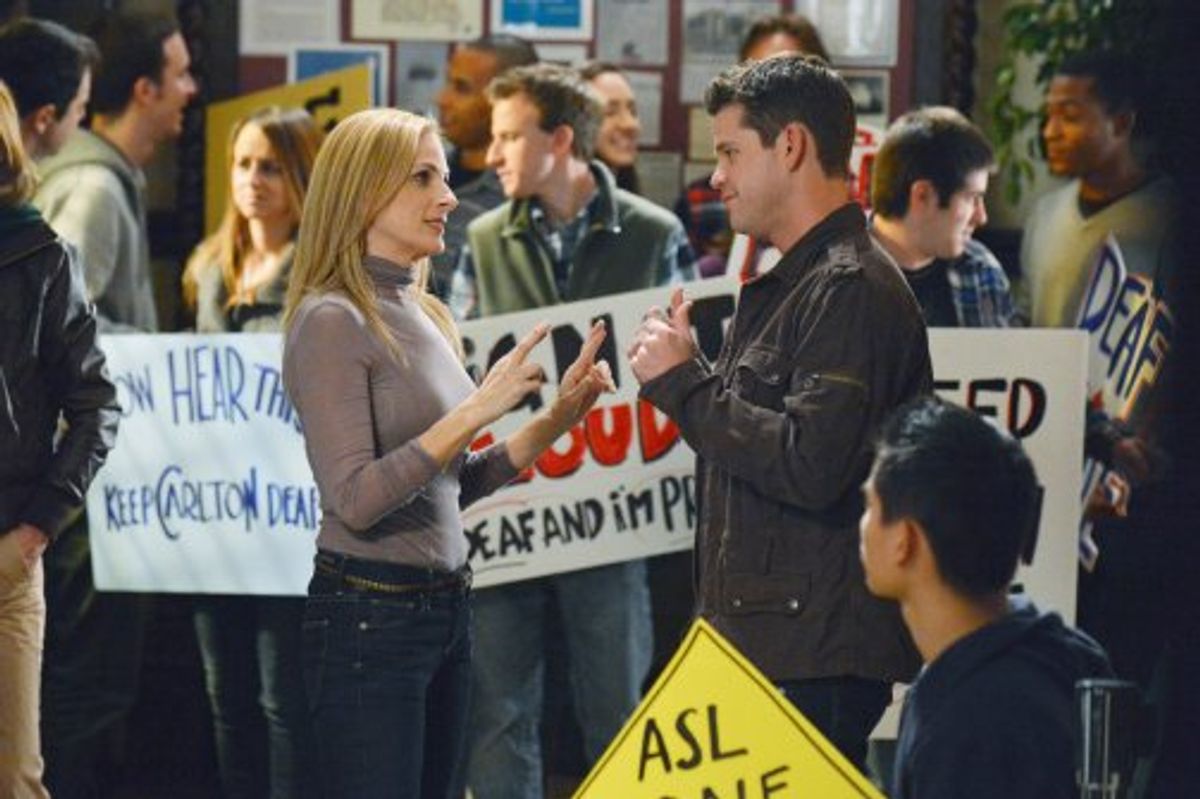 “Switched at Birth,” the ABC Family series about two teen girls who were switched at birth, aired an episode almost entirely in American Sign Language last night. It was fantastic.  If you have never watched "Switched at Birth" and want to zone out now, please know that I’ve read about “Switched at Birth” and I’ve seen a few episodes, but I have not seen very many episodes — and that didn’t matter at all.

Here’s the necessary background: “Switched at Birth” stars Daphne (Katie LeClerc) and Bay (Vanessa Marano), the two eponymous teenagers. Daphne is deaf and Bay is not, but since they have gotten to know each other, their families have become entangled — Daphne and her working-class single mother (Bay’s biological mother) now live in Bay's much richer family's guest-house — and Bay now attends Daphne’s school, Carlton, a school for the deaf, as part of a pilot program for hearing kids. The school board has recently decided to close Carlton. The students, taking inspiration from the 1960s, the Occupy movement, Gallaudet and, inevitably, when it comes to teenagers sticking up for their collective rights against the man, the infamous “Donna Martin Graduates” episode of “90210," decide to take over a building and camp out there until the school board overturns its decision.

The episode began with sound. Bay and another partially hearing student talk about the school’s closing, followed by an all-signed classroom conversation that was still full of ambient noise: hands hitting each other and desks, kids vocalizing. In that scene, Marlee Matlin, who plays a guidance counselor, led a conversation about mainstreaming and how she knows the kids are upset about having to go back into the regular school system. The kids are angry and worried — “We’re gonna be treated like freaks” — and convinced that the school board just “doesn’t get it.” Matlin agrees: “Until hearing people walk a day in our shoes, they will never understand. Never.” At which point the sound — even the ambient noise — drops out, and remains out until the last 30 seconds of the episode.

Music played throughout — too much of it. But “Switched” isn’t the only piece of entertainment over-saturated with soundtrack these days. Even though the episode came with a disclaimer at the beginning — the actresses who play Bay and Daphne explaining what was about to happen, and that, no, the sound on your TV wasn’t broken — ABC Family probably didn’t want audiences tuning in to total silence and calling their cable company. Artistically that would have been better. The obvious music used to broadcast how "important" or "romantic" or "light" any given scene is is silly enough, but it becomes almost perverse in an episode of TV explicitly interrogating the experience of living in the world where these sorts of social cues and narrative cheats don't function.

But what was best about the episode was just how meaty and deep it got for a piece of entertainment that also featured an illicit, rehearsing-for-a-school-play kiss, a plot point that once appeared in "Saved by the Bell." After they’ve barricaded themselves in the building, the dozens of students assembled have a long, heated debate about what they should do next. They’ve been tweeting and taking pictures, and one of the boys has posted a snapshot of them drinking beer. Daphne, who has taken a leadership role, insists this is all wrong: they want to show how serious they are, that they are an important cause, not that they’re just trying to get drunk. In an absolutely perfect, mind-bending teenage boy response, one replies, “Why can't we be serious and get drunk?” (Then he tells Daphne to "relax": also perfect.) Daphne continues to make her case, pleading to her peers for them to turn in all their phones and ipads and computers until they figure out what they’re message is. And so a scene as old as teenage-rebellion in TV and film takes place — the one where slowly one, and then two, and then three, and then all the of the high schoolers assembled do what's right — but instead of raising their hands in solidarity, or climbing on a desk chair, these kids turn in their electronic devices, a perfect 2013 twist on adolescent sacrifice.

The episode was also truly political — political in a way I’m not sure I’ve ever seen a teen show get — perhaps because questions about hearing vs. not hearing have not been politicized for the vast majority of the country and so are "safe" to show on TV. The students, while making a list of demands, question whether hearing kids, like Bay, should be allowed to attend the school, with Bay fiercely fighting with a boy who wants the school to be 100 percent deaf. Daphne doesn’t say anything. Later, she and Bay get into it about what Bay thinks Daphne owes her because they are family, and what Daphne thinks she owes her principles. Bay may be a part of a minority at their high school, but she's part of the majority in the world, and there's some things she just doesn't, can't get. Needless to say, when “90210” was defending Donna Martin, it was not gesturing in the direction of anything so complex.