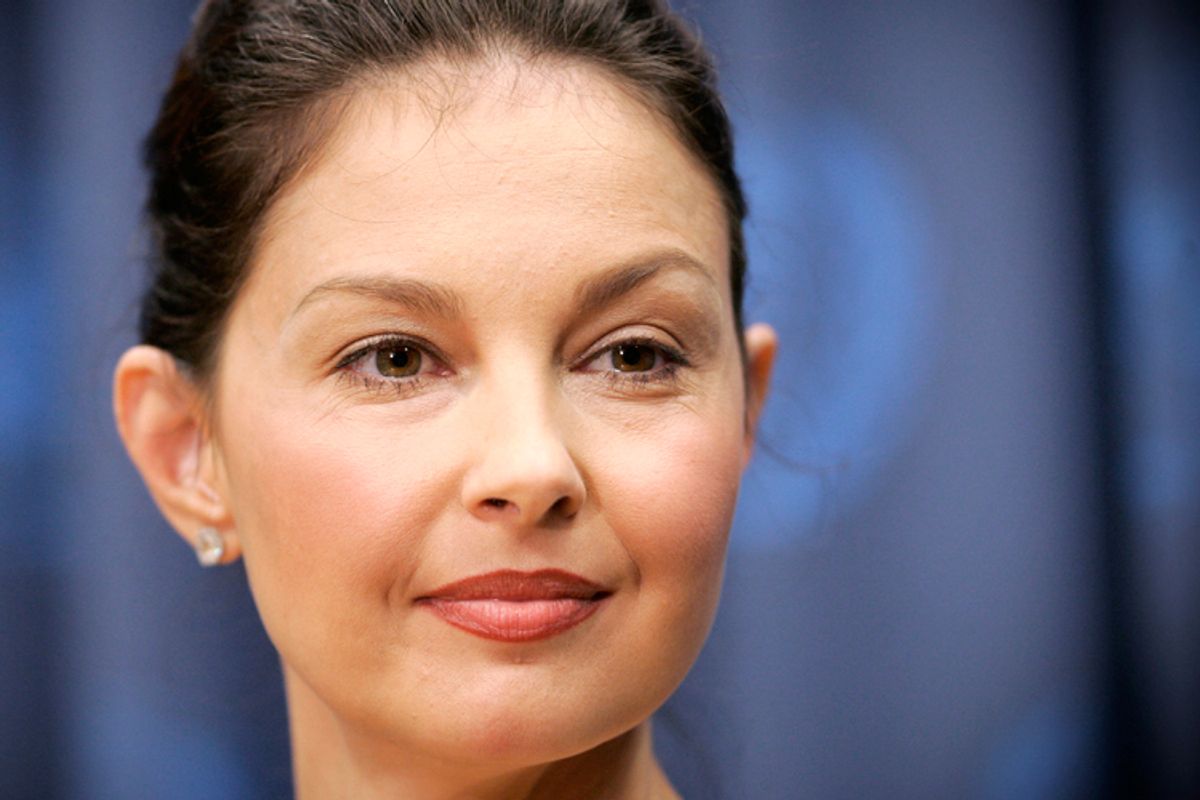 You have probably seen Ashley Judd naked. The Daily Caller would like to remind you of this in the context of her probable plans to run for Senate in Kentucky. The question is, does anyone care anymore about whom they've seen naked? And if they do, will they care in a decade or two?

Yes, the Daily Caller piece, to which I refuse to link, was sexist and gross. It was, as ThinkProgress's Alyssa Rosenberg put it, "part and parcel of the right’s current strategy to discredit promising female advocates," and "an attempt to make her seem less serious by impugning her sexual chastity." Was Scott Brown's strategically placed arm over the flesh he bared in Cosmo the difference between his getting elected to the Senate and not, or was it the double standard?

In any case, the fact that the Daily Caller treated the Judd images as breaking news in the right's overall attempt to discredit her is itself revealing, as Amanda Marcotte noted, and the same astonishment should be applied to Brown: "I mean, we can’t prove for certain from the photographic evidence that Brown has a penis, but the overall nakedness does suggest — and I know that the folks at Daily Caller are in utter shock over this — that he has a body under those clothes that looks like a naked one, and so we can probably assume the penis is there."

Here's what else we can assume: Naked images of people we are simultaneously asked to take seriously are not what they once were. Yes, everything that happened with Anthony Weiner happened (including an unverified nude photo courtesy of Andrew Breitbart). Yes, a shirtless shot sent to a Craigslist contact led another congressman to resign. But both were in the context of infidelity and/or dishonesty. Judd's nudity and sex scenes were in the service of plot. And more to the point, those men arguably were subject to the standards of a shifting age, a generational lag time.

Instead, she embraced the controversy both as an opportunity to talk about sexist double standards and generational change. "I realized that photos like the ones of me, and ones much racier, would end up coming into the public sphere when women of my generation run for office," she wrote. "Society has to accept that women of my generation have sexual lives that are going to leak into the public sphere. Sooner or later, this is a reality that has to be faced, or many young women in my generation will not be able to run for office."  The men too, even if they suffer different consequences for it.

That goes not just for people running for office but for the next generation of voters. Studies vary on how many teens are actually sexting, depending on how the question is asked and how sexting is defined, from about 3 percent to about 30 percent. In a longitudinal study of Texas teenagers, "Twenty-eight percent of the sample reported having sent a naked picture of themselves through text or e-mail (sext), and 31% reported having asked someone for a sext. More than half (57%) had been asked to send a sext." The distribution of these photos isn't neutral; girls are still the ones most often shamed and bullied just for their existence. Still, with the market flooded by boobs, it's hard to argue that they register the same shock suggested by Seth MacFarlane's creeptastic song.

After all, we live in an age where George W. Bush's email gets hacked, we learn he's painting semi-nude self-portraits of himself in the bath and shower, and everyone chuckles or shrugs. Who will be the first ex-president to have a hacker release his nude selfies?