Does Eric Holder know the law?

The A.G. said today that Congress can't prohibit killings on U.S. soil. He should re-read that statute 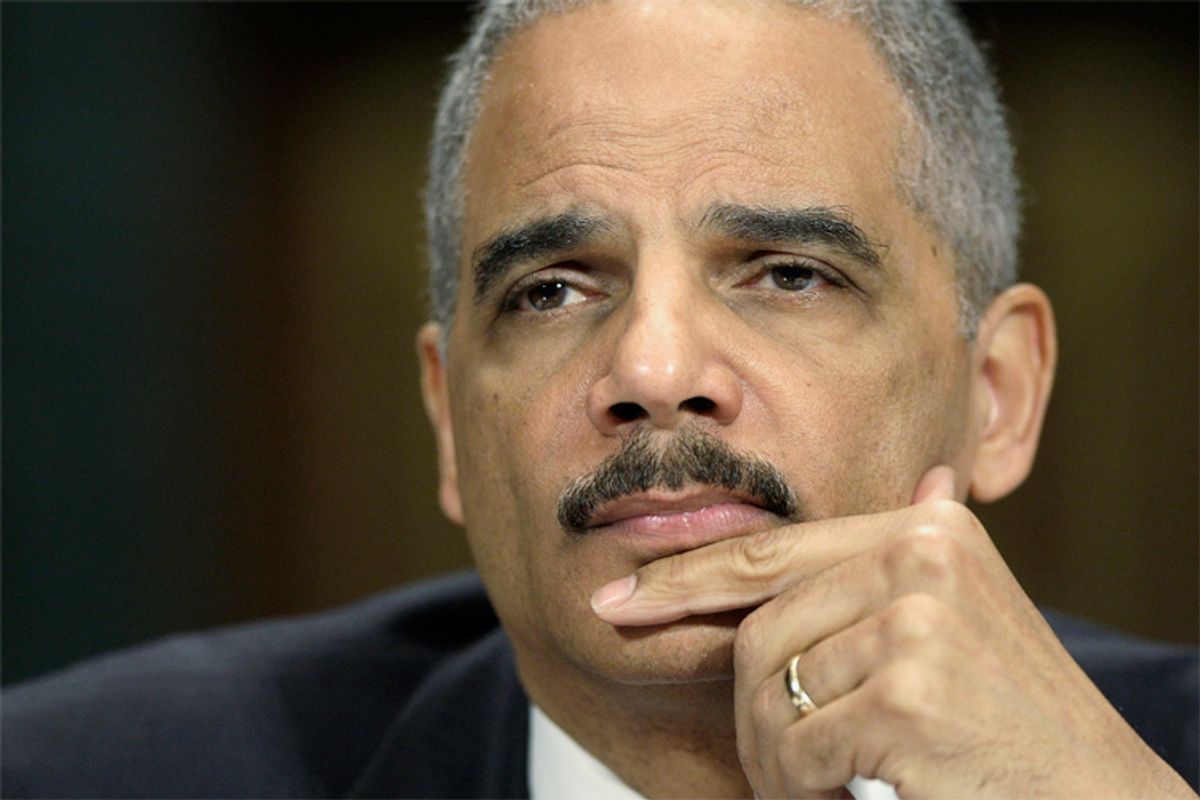 In a chilling statement about executive power, Attorney General Eric Holder today declared that the president can authorize lethal force against Americans, and that Congress can not constitutionally limit such powers.

At a Senate Judiciary Committee hearing today, Sen. Chuck Grassley, R-Iowa, asked Holder whether Congress could prohibit the targeted killing of Americans in America. “Do you believe Congress can pass a law prohibiting POTUS to use lethal force on U.S. soil?” he asked directly, explaining he meant the prohibition would apply only where a person did not present an imminent threat.

“I’m not sure that such a bill would be constitutional,” the attorney general responded. “It might run contrary to the Article II powers that the president has.” Article II is the section of the Constitution that lays out the president’s authority as commander in chief of the military.

The exchange suggests that the administration believes that Congress cannot limit the president’s authority in such an area, a view consistent with public Office of Legal Counsel opinions on the war.

The exchange took place amid many other questions about the president’s targeted killing authority and the DOJ memos authorizing the targeted killing of Americans. For example, Holder assured Mike Lee, R-Utah, that the OLC memos would provide a much clearer understanding of what the administration means by an “imminent threat” that is not immediate, the vague standard it believes is required to authorize such a strike. When Lee asked if the memos would also provide more clarity on what made capture infeasible, Holder provided no such assurance.

In addition, Holder embraced a view of the 2001 Authorization to Use Military Force that completely ignores the legislative history of the law that authorized the war against al-Qaida. “We didn't exempt the homeland in the AUMF, did we?” Lindsey Graham, R-S.C., asked the attorney general, in a question setting up his support for presidential use of lethal force in the U.S. “No,” Holder replied, “I don't think we did.”

The attorney general may believe Congress authorized the use of lethal force in the U.S. with the AUMF, but former Senate Majority Leader Tom Daschle has made it clear that Congress refused to authorize military force in the U.S. “Literally minutes before the Senate cast its vote,” Daschle revealed in a 2005 Op-Ed that described the legislative process behind the AUMF, “the [George Bush] administration sought to add the words ‘in the United States’” into the authorization. Such a change, Daschle continued, “would have given the president broad authority to exercise expansive powers not just overseas -- where we all understood he wanted authority to act -- but right here in the United States, potentially against American citizens.”

Back in 2001, Congress very specifically refused to authorize lethal force against Americans.

But today, Eric Holder not only revealed that he believes the president has that authority anyway, but that it doesn’t really matter because Congress could not constitutionally limit such powers.

Tuesday, after having finally gotten the administration to share the OLC memos on targeted killing not just for a quick glimpse, but a more lengthy read by legal staff, the Senate Intelligence Committee moved John Brennan’s confirmation forward with 12-3 vote. His confirmation to be CIA director is currently on the Senate floor — though Sen. Rand Paul, R-Ky., is trying to delay that vote, in a filibuster that will ultimately prove ineffective, by his own admission.

But even those who fought and won the ability to review the memos say there are still issues to discuss about the content of the memos going forward. “We believe that this sets an important precedent for applying our American system of checks and balances to the challenges of 21stcentury warfare,” Sens. Ron Wyden, D-Ore., Mark Udall, D-Colo.,, and Susan Collins, R-Maine, said about this minor victory of transparency and oversight in a joint statement. They continued with an implicit admission that there is more to be done. “We look forward to reviewing and discussing these documents in the days ahead.”

They — and a number of members of the Senate Judiciary Committee — suggest there need to be changes to the underlying arguments. They also admit that Americans should see the memos.

And yet the Senate Intelligence Committee has just given up — and the Senate is about to give up — the leverage it has to force such changes.

Members of Congress have asked for these OLC memos more than 21 times. It wasn’t until senators threatened to hold up the confirmation of John Brennan that a select few actually got to see them. How long will it be until Congress once again has the leverage to actually challenge these expansive claims?