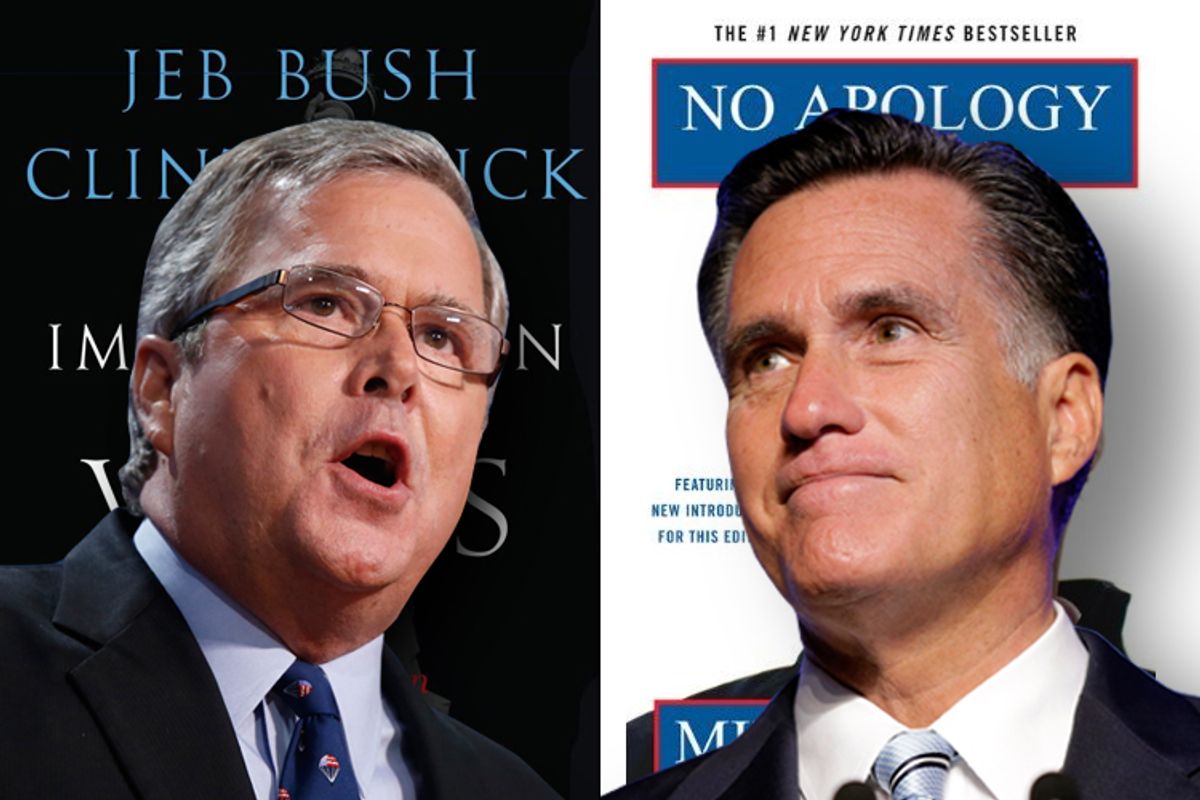 Jeb Bush, the former governor of Florida and probably a future presidential candidate, signaled his presidential ambitions by publishing a big public policy book this month. The book is called "Immigration Wars: Forging an American Solution," and it has a small problem: It was totally out of step with where the Republican Party had moved on immigration by the time it was published. Jeb Bush, who had previously been on the corporate, "moderate" side of the issue, in favor of citizenship for currently undocumented immigrants, seems to have decided that he needed to move to the right to remain viable in a Republican presidential primary campaign, and so his book quite explicitly deems a path to citizenship unacceptable. Alas, it then very quickly became OK again for prominent Republicans to support comprehensive immigration reform, in between when Bush's ghostwriter wrote the book and when it was published. Now, Bush is on TV once again sounding open to citizenship, though he is forced to pretend that he is "not smart enough" to figure out an issue that he just ... published an entire book about.

In other words, the Republican Party's rapid evolution and the timetable of book publishing forced Bush to shift positions on immigration three times in the space of nine months. Bush's original intention was to get conservative nativists to support some form of immigration reform, and in trying to make the case for more (work-based) immigration palatable to right-wingers he moved himself well to the right of where he actually would end up needing to be. Thankfully 2016 is still a long way off. All of this could've been avoided if only Bush hadn't decided to write a big public policy book.

The books aren't meant to be read, as a traditional book might be. Policy books by would-be candidates are just tokens of "seriousness," meant to establish which issue or issues the author will make the centerpiece of his or her eventual campaign. Only political journalists actually pay attention to what is in these books, and they do so almost solely to find material with which to accuse candidates of flip-flopping or deceiving.

For today's Republicans, writing a book is particularly dangerous, and ill-advised. Just ask Mitt Romney, whose 2010 "No Apology: The Case for American Greatness" was full of passages that could've disqualified him as the Republican nominee, until he rewrote it for the paperback edition a year later.

Though the two men ended up overcorrecting in opposite ideological directions, Bush's book falls into many of the same traps that Romney's did, because both men are essentially gormless political creatures devoid of authentic principles. 2010 Romney thought he'd run in 2012 as the "muscular foreign policy" dude, against a Democratic "wimp." He could not have predicted that a) the GOP as a whole would just refuse to have anything at all to say about foreign policy because Americans are sick of caring about the rest of the world and b) the Obama administration was going to kill bin Laden and then make sure everyone knew about it. So he was left with a book that made him sound like a moderate technocrat on domestic issues and a mega-hawk on foreign issues, which was the opposite of where he needed to be in 2012 to actually get the nomination. For the 2011 paperback edition, Romney excised support for the "stimulus," heavily rewrote the healthcare portion and added an introduction in which he wrote the word "Constitution" 11 times. The election wasn't going to be about getting tough on China, it was going to be about hating Obamacare.

I think Bush saw someone like Jon Huntsman -- a doctrinaire conservative in most respects, especially on taxes and economic issues -- try to run by appealing to the "moderate," "reasonable" wing of the party and end up losing spectacularly (while winning a great deal of media love and attention), and decided that he'd just start serving up dumb red meat for the nuts right away. Hence, opposing the Medicaid expansion not for any slightly defensible reason, but because some of the money might go to the children of illegal immigrants. How could Jeb have known that insane Florida Gov. Rick Scott would take the Medicaid money by the time the book was published?

The Republican Party is still so rudderless and confused in the post-Bush era that there's no way for people like Bush or Romney to figure out what sort of candidate they will have to be in a few years or even a few months. Previously acceptable conservative policies may suddenly become toxic -- as happened to eliminating "wasteful" tax expenditures -- if Democrats begin to support them. Previously heretical positions may suddenly become acceptable, as the party desperately tries to figure out how to remain viable in Senate and presidential elections. While Jeb Bush substantively moved to the right, Bobby Jindal figured the better move would be to rhetorically proclaim himself a reasonable moderate while not changing a single conservative position. Jindal hasn't written a new book, though, so reinventing himself is much easier.

So the problem with the big policy book is that the upside is at this point minimal -- it's safer to just do a couple of platitudinous speeches to some think tanks -- while the downside is larger than ever. A cheesy quickie autobiography, like Joe Biden's 2008 effort, is a safer bet, but even in those you will probably have to bring up current political issues at some point, and all policy issues are potential minefields these days.

If Jeb Bush is smart, he'll just shut up about all national issues until some point in mid-2015.