Is "The Bible" comfort TV?

"Survivor" producer Mark Burnett's retelling of the Bible is a ratings smash. Too bad it stinks to high heaven 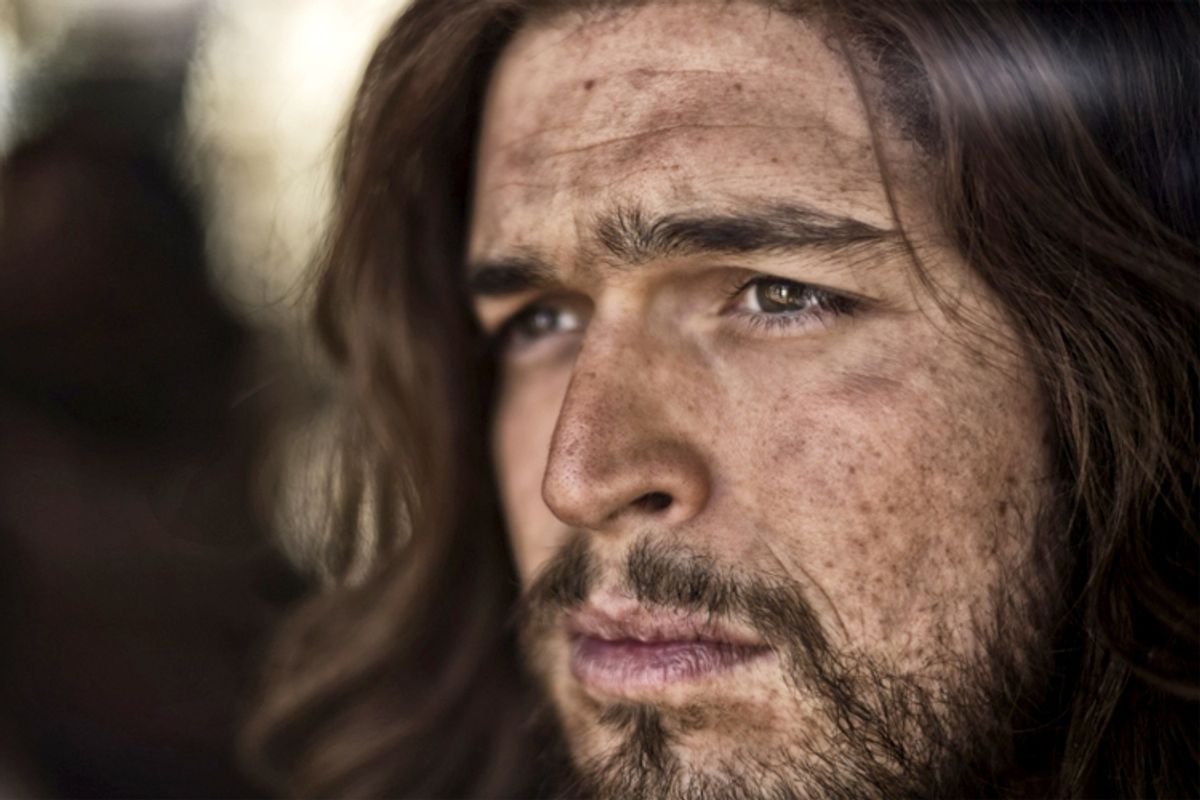 The first part of the History Channel’s miniseries “The Bible” was watched by 13.1 million people on Sunday night. This is a huge number, another shiv in the guts of network television. As the New York Times noted, it is double the number of viewers who watched anything on NBC last month, and even more people than watch “The Walking Dead,” another cable show that makes network TV executives drool.

The success of “The Bible” is and is not surprising. That’s a huge audience, and a huge audience for a bad series — plodding, stiff, dull, God-is-a-white-guy-with-sandy-blond-hair kind of bad. But it has been demonstrated before that there is a huge market for religious-based, evangelical-leaning entertainments, of which “The Bible” is clearly one. (Mark Burnett, the producer of “Survivor” and a very canny finder of eyeballs, is one of the series’ producers.) Part of the reason the series is so middling is that it is explicitly constructed not to offend this demographic: It isn’t even serious about all of the crises of faith chronicled in the actual Bible, because that would require elucidating ... crises of faith.

And yet as artistically lacking as I found “The Bible,” I won’t be upset, exactly, if there are more like it, even though I would never willingly choose to watch that. We all watch bad television that we enjoy despite its badness: I watch "Smash” for goodness' sake. If “The Bible” is someone’s idea of comfort TV, why shouldn’t they have it? Would I snobbily stomp on the sacred American right of the Evangelical red-stater who I suspect — on no hard evidence at all – is watching this series to watch something crappy? It's better than “Anger Management,” anyway.

The first installment of the "The Bible" skips through the Old Testament: Adam and Eve to Noah to Abraham and Isaac and Lot and then straight on to Moses. Jacob and Joseph get the shaft, but Samson — black and dreadlocked — gets his due and David gets even more. Daniel and Jeremiah and Nebuchadnezzar all come to the forefront before the series gets to Jesus, the star of the show. Throughout, the stories are more detailed than anyone who doesn’t read the Bible might expect, without being nearly comprehensive. In “The Bible’s” telling, Moses’ story ends after he brings the Ten Commandments down from Mount Sinai, neatly excising the Golden Calf or the bit about how Moses was kept from the Promised Land for smoting a rock.

The cast is huge, the colors are drab, it's hard to tell anyone apart or much care, unless you already care. Everyone has a beard and smudges on their faces — it’s olden times — and there is an ever escalating amount of violence. It's narrated by someone who sounds like he’s fresh off a gig doing a National Geographic nature documentary, which can be odd, like when “Desperate, the Israelites resort to cannibalism” is one of the voice-over lines. God, even when speaking from the Burning Bush, sounds sweet, like a kindergarten teacher, but he has a very faint, unplaceable accent, though you figure God would be fluent in everything. (Speaking of unplaceable accents, half the cast, at random, speaks with a transatlantic or British lilt.) Satan looks like Emperor Palpatine.

The success of "The Bible" despite these flaws speaks to the great divide in TV right now: the zeitgeist is not a big ratings draw. There are shows people talk about — "Mad Men," "Breaking Bad," "Homeland," "Girls" — that are watched by at most 3 or 4 million people (and sometimes much, much less), and shows watched by tens of millions of people — "CSI," "Big Bang Theory," "Hatfields & McCoys" – that are not much discussed (or at least not on the parts of the Internet that constitute and feed the culture industry), and nearly the only overlap are "The Walking Dead" and "Downton Abbey." I would never want to see the former category watered down and perverted into becoming the latter, but the latter serves its function: It's what the vast majority of people like to watch, and being likable to watch is the relevant characteristic for the 90 percent of TV not up to something more ambitious.

James Poniewozik writing about "The Bible" yesterday lamented the kind of copycat series it's likely to spawn: more mediocre retellings of Bible stories as opposed to the more nuanced, interesting depictions of religion and faith, especially as practiced today, that are so sorely lacking from TV, but so relevant to many Americans' lives. I would much prefer to watch this kind of show than another "The Bible," but the fact is I am in the minority. Thirteen million people who watched "The Bible" is a lot more than watched "Friday Night Lights," which Poniewozik points out was the best modern show on religion and struggled with ratings for its entire life.

Right now, NBC is wasting money and creative capital on "Smash," a show that 2 million people watch and is a total train wreck. NBC could do worse than a lame Bible retelling of its own (or a great religious-themed show of its own), not just because it needs the viewers— though certainly it does— but because it clearly serves viewers, some 13 million of them, who don't show up in those numbers for much else. I would rather sit through 10 hours of "The Bachelor" than watch "The Bible" again, but when it comes to bad TV, we should all get to pick our poison.