If he's right on principle, progressives should back him up -- even if he's wrong on everything else. Here's why 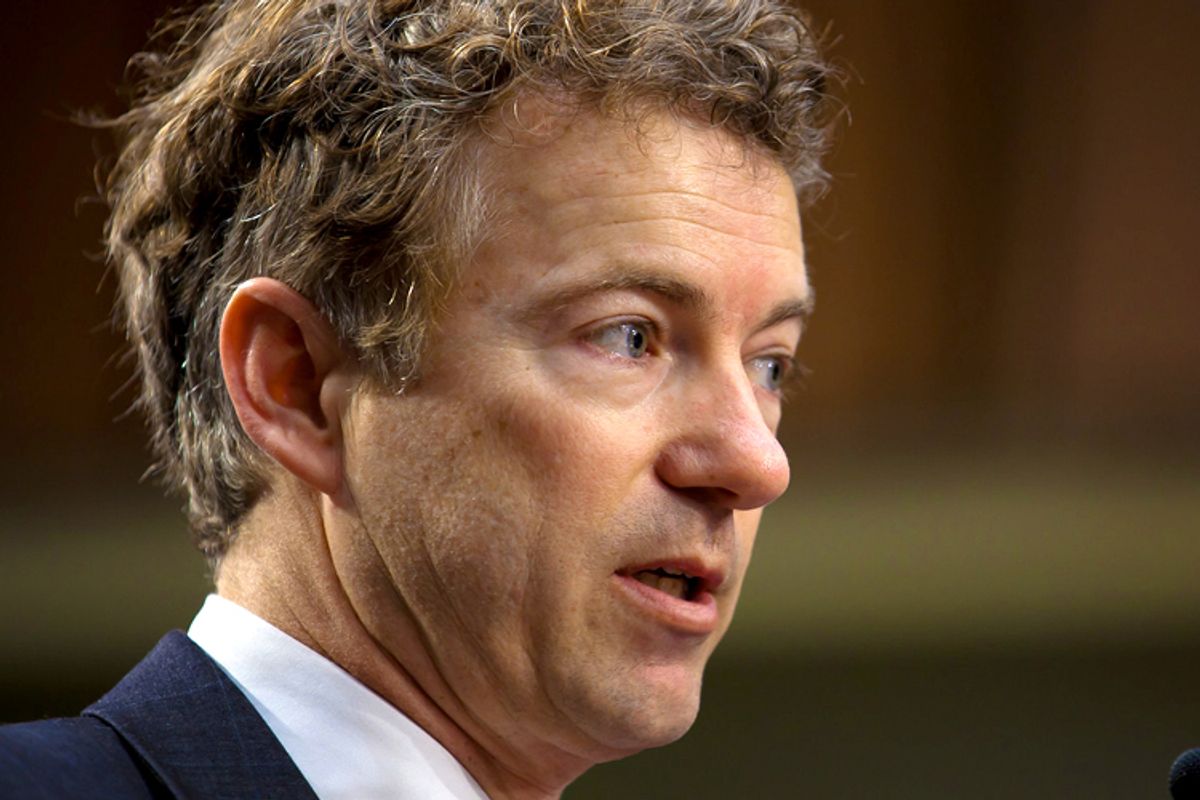 This story has been corrected since it originally published.

Addie Stan's latest piece at Alternet is a must-read summary of one of the most insidious trends in American progressive politics: the trend toward seeing anything and everything as a purely partisan endeavor, regardless of possible outcomes.

Reporting on Rand Paul's heroic filibuster against President Obama's drone war, Stan makes the case that progressives shouldn't support such a filibuster because Paul is a Big Bad Republican. She says it is "horrifying to see" principled progressives cheer on Paul's attempt to force the Obama administration to answer basic questions about civil liberties -- horrifying not because Paul is wrong on that issue, but because he's wrong on other, totally unrelated issues and represents an evil "paranoid base" that dares to fear a government that "might soon be launching drones against them."

Setting aside the snide disregard ("paranoid") for those who don't like the idea of a violent police state, Stan's larger argument is a guilt-by-association non sequitur -- but it is a powerful and pervasive one. As Stan says, the idea is that "to stand with Rand means to lend support" to everything he supports in totality. As any quick perusal of Twitter yesterday showed, this kind of thinking is ubiquitous among Democratic Party operatives and activists who never want to think of themselves as anything but 100 percent pure haters of every single thing a Big Bad Republican stands for.

There are two pernicious problems with this kind of psychology.

First and foremost, it is embarrassingly hypocritical. Many of the same Democratic partisans have argued (or at least remained silent in the face of such arguments) that President Obama has an obligation to try to work with Big Bad Republicans on ending the sequester and enacting Simpson-Bowles-style cuts to Social Security and Medicare. Somehow for Democratic partisans, this is perfectly acceptable -- even laudable! -- for a sitting Democratic president to wine and dine these Big Bad Republicans as he's putting forward a budget proposal that tilts hard to the right. And when that happens, nobody in their right mind insists that Obama working with those like John Boehner or Mitch McConnell "means (he is) lend(ing) support" to their entire agenda.

Yet, when liberals support or propose to work constructively with Big Bad Republicans on actual liberal priorities that challenge a Democratic president -- like, say, ending the drone war and protecting civil liberties -- that is somehow portrayed as unacceptable or "horrifying." Worse, it is portrayed as endorsing the entire agenda of the Big Bad Republicans whom liberals find a momentary point of common ground with.

The double standard is appalling -- and inane. By its twisted logic, liberal Sen. Paul Wellstone was "lend(ing) support" to the overall awful record of Sen. Pete Domenici when he worked with the New Mexico Republican to pass mental health parity legislation. By this same logic, progressive champion Sen. Bernie Sanders was "lend(ing) support" to the entire awful record of Sen. Tom Coburn when they worked together as House members on drug reimportation legislation. And by the same logic, liberal civil libertarians are "lend(ing) support" to the entire awful record of Sen. Rand Paul. Such criticism might be valid, of course, if these liberals were fully endorsing every aspect of their Republican colleague's record, but that's not what was happening, which makes the logic utterly absurd.

Yet, as absurd as it is, why do so many Democratic partisans nonetheless instinctively embrace it? That gets to the second problem that pervades so much of the left: prioritizing partisanship over everything else.

In a political system that depicts every issue in red-versus-blue terms, much of the left has come to accept and internalize those terms as the only ones that are valid. Thus, Obama working with the GOP to pass a conservative budget proposal is seen by many in the Democrat-worshiping left-of-center coalition as a good thing irrespective of its real-world policy ramifications. Why? Because it promises to the Democratic Party's president a partisan political victory over the Big Bad Republicans. By contrast, liberals working with the GOP to stop a war is seen as a bad thing irrespective of its real-world impact. That's because it might embarrass the Democratic Party's president and deliver him a partisan political defeat.

This is the difference between partisan hackery and movement activism. The former is all about defending a party, regardless of what that party happens to be doing, and attacking that party's opponents even if they happen to be doing something good. In that psychology, principles are viewed as situational, and they are secondary to partisan political goals. By contrast, movement activism (or, really, just honest citizenship) is about defending a set of principles, regardless of how doing so may inconvenience either party. In that case, party politics are situational -- and secondary to principles and legislative outcomes.

The crisis for progressives, then, is that the psychology of partisan hackery too often wins the day on the left. Whether activists or lawmakers, the principled liberals who try to fight the good fight on everything from war to healthcare to bank bailouts are pressured by the left to subvert their principles in the name of a Democratic Party victory, regardless of whether that victory tramples progressive priorities. Similarly, as in the case of Paul, progressives looking to form transpartisan left-right coalitions on liberal causes like protecting civil liberties or drug policy reform are lambasted as traitors when such coalitions dare to go up against a Democratic Party's president.

Ultimately, the whole dynamic too often ends up delivering just what you'd expect. You get Democrats getting a political win by passing a healthcare bill that the party itself acknowledges is a concoction of the ultra-conservative Heritage Foundation. You get Rand Paul's filibuster thwarted and a Democratic White House triumph, while the drone war expands. In short, you get an oxymoron: Democratic Party "wins" that are actually conservative policy victories.