"Oz the Great and Powerful": James Franco, bored in Candyland 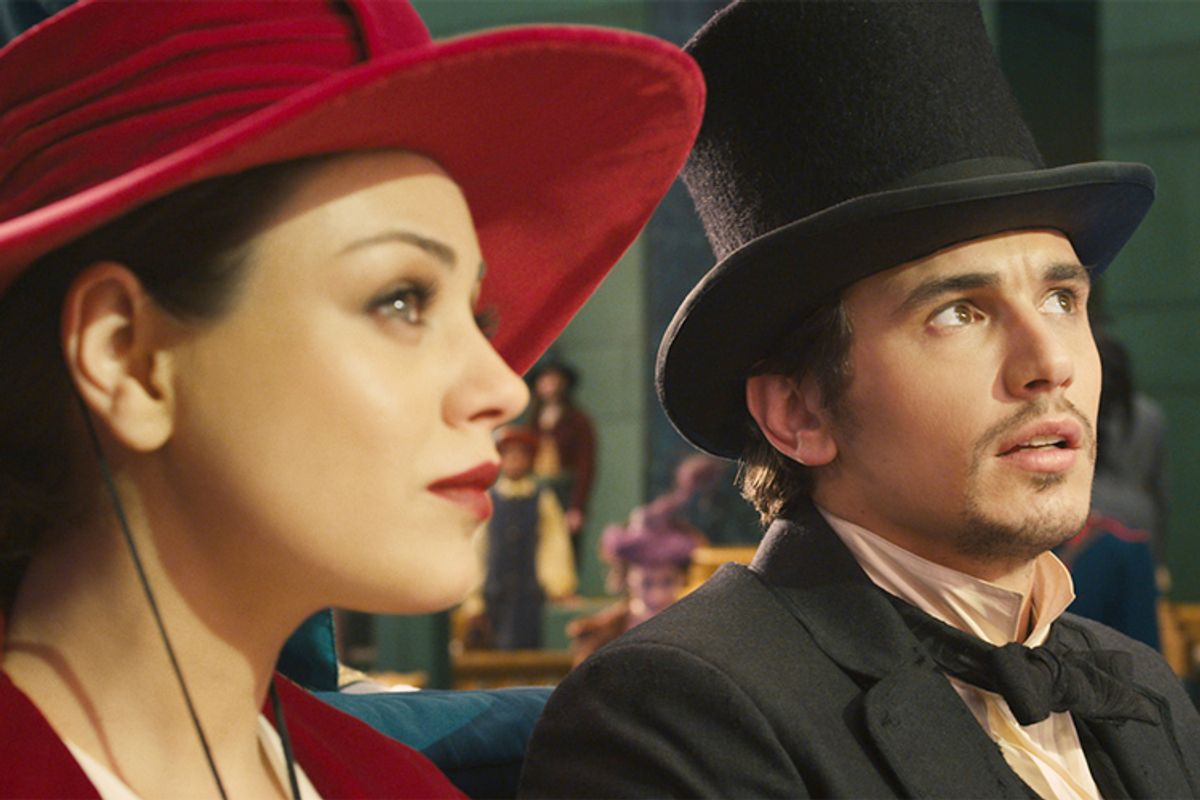 People probably won’t feel ripped off or confused by “Oz the Great and Powerful” the way they did by “Jack the Giant Slayer” or the parade of dismal, geriatric action movies that have made the depths of winter seem grayer than usual for Hollywood. Sam Raimi’s gazillion-dollar prequel to “The Wizard of Oz” features gorgeous production design – liberally quoting and pilfering from the beloved 1939 original – dazzling costumes (many of them draped on Rachel Weisz) and explosive, imaginative special effects. You can feel its good intentions, even when Michelle Williams isn’t on screen, glowing with the ethereal, saintly blondness of Glinda the Good Witch. Raimi and his collaborators have made an honest effort to capture the family-movie spirit of old Hollywood, while updating the action and humor to more contemporary standards.

But saying that Raimi’s trip to Oz is adequate eye candy with a good heart isn’t the same thing as saying it’s actually good. I was charmed at some moments, profoundly bored by others and almost never felt genuinely excited or emotionally engaged. A lumbering, bloated spectacle with a weak script and a flat, awkward central performance by James Franco, “Oz the Great and Powerful” feels like a hybrid of “Avatar” and “John Carter,” meaning that it’s increasingly unclear what the point of the movie is, except to look great and make money. If it’s nostalgic for something, it doesn’t really know what, or why: The production values of 1939? The dire social and economic context of 1939? The unsophisticated and supposedly innocent fantasy universe of L. Frank Baum?

If the commercial fortunes of “Oz” lie somewhere in between “Avatar” and “John Carter,” and probably a bit closer to the former – everyone at Disney, and most people in Hollywood, are hoping this is the year’s first big hit – that reflects the tide of positive hype and an unbeatable level of “pre-awareness” and audience goodwill. (Hardly anyone outside a modest core of sci-fi readers had heard of John Carter; nobody hasn’t heard of the Wizard of Oz.) But the things I remember about this movie the morning after seeing it are all about its references to that other movie. The whole audience went “Oh!” when we saw the note-perfect painted backdrop for the Emerald City, and it’s impossible not to smile at the precise recreation of the cornfield, the Yellow Brick Road and the split-rail fence where Dorothy, the Scarecrow and the Tin Man will dance, sometime in the future of Oz. As for what actually happens along that road in “Oz the Great and Powerful,” that’s not half as memorable.

Those of us who loved the “Evil Dead” movies keep hoping that the fierce, kinetic, freewheeling madness of Raimi’s early career will show up in his studio pictures, but the truth is we’ve been seduced and abandoned, like the Kansas country girl left behind by Franco’s huckster and carnival magician when he makes his balloon getaway. Each of Raimi’s “Spider-Man” movies has moments of terrific action cinema, but over the course of that trilogy he turned into a contemporary version of Cecil B. DeMille, a cynical populist with a trademark style whose only storytelling task is to get us from one special-effects showcase to the next. That’s as good a way of explaining what’s right and wrong with “Oz the Great and Powerful” as any.

There are a handful of simultaneously delightful and frustrating scenes of pure Raimi insanity here, like distorted shots of Franco and his traveling companions from the point of view of carnivorous flowers in the Dark Forest. And let’s give Raimi credit for actually using the 3-D format to deliver a significant number of sight gags that should leave kids in the audience shrieking and ducking. This isn’t the murky, light-stealing 3-D of so many other recent films, and it might actually be worth the extra few bucks. So it’s not like there’s zero fun factor here, by a long shot – but the fun comes yoked to a long-winded and predictable story with lots of dead spots.

We begin, of course, in black-and-white (and in a nearly square aspect ratio, a nice touch). Roguish traveling magician Oscar, known as Oz (Franco), has broken a few too many local girls’ hearts and needs to beat a hasty retreat from his carnival’s Kansas encampment. The one he actually likes, Annie (Williams), is about to give up waiting for him and marry a local farm boy, and Oz makes it clear he’s not ready to give up his dreams of Harry Houdini cum Thomas Edison glory and settle down. So he flies his balloon through an impressive CGI tornado into the wide-screen, full-color Candyland of Oz, in an extended effects sequence that has both the thrill value and the narrative momentum of an amusement-park ride, and that may be more fun than anything that follows.

I’m not a Franco-basher, in general; I think he’s a fine actor in the right context, however overexposed he is as a hipster-flavored celebrity and Renaissance man. I can tell he made all sorts of acting-school decisions about this character, but I don’t think we needed his introspective, discount-Brando act when it came to playing the Wizard of freakin’ Oz. Franco’s not exactly terrible, it’s just that he comes off as insincere and indecisive in a role that demands ebullient showmanship and shameless sentimentality in roughly equal measure. His character seems about to drift off in some other direction – shifty-eyed mob hitman? Norse trickster god? – at any moment, and never feels even remotely related to Frank Morgan’s wizard in the 1939 movie.

Anyway, when Oz gets to Oz he’s received as the savior wizard long foretold by prophecy, partly because of his name and partly because a semi-good but profoundly naïve witch called Theodora (Mila Kunis) flips for him immediately, and announces that she’d love to be his queen and co-ruler. Women! Kunis seems even more out of her depth than Franco here, largely because Theodora is more like a construct than a character, first dense and then profoundly evil. (Oops! Wasn’t supposed to tell you that, was I?) She’s being bossed around by her sister Evanora (Weisz), who boasts fabulous gowns and a haughty English accent, and has exiled their super-obviously-not-evil third sister, Glinda (Williams), into the deep, dark forest.

I like all three of those actresses, but their roles are essentially static forces, between whom Franco’s Oz bounces like a smirking pinball. Weisz, at least, chews up the scenery with abandon and looks sensational framed against the Emerald City sets. Williams’ Glinda is permeated by such a permanent, buzzing, beneficent glow that I couldn’t actually listen to anything she says. It feels vaguely icky and wrong when Franco finally gets around to kissing her, as if a minor character from “Boardwalk Empire” were snogging the Virgin Mary.

On Oz’s super-predictable quest from sister to sister, which features a few good action sequences without ever being surprising, Oz is joined by Zach Braff as a regrettable talking monkey, and an adorable if faintly troubling china doll – this movie’s greatest and weirdest CGI accomplishment -- voiced by young actress Joey King. As “Oz the Great and Powerful” went on, I focused more and more on the Oz minutiae lifted from Victor Fleming’s original film with such OCD attention: the field of soporific (if botanically inaccurate) poppies on the road to Emerald City! The Swiss-villager-on-acid costumes of the locals! If anything, the details are too perfect, undertaker-style, and the true spirit of Oz refuses to be reanimated.