7 examples of cowardice on "The Daily Show"

Why does Jon Stewart wimp out so often? 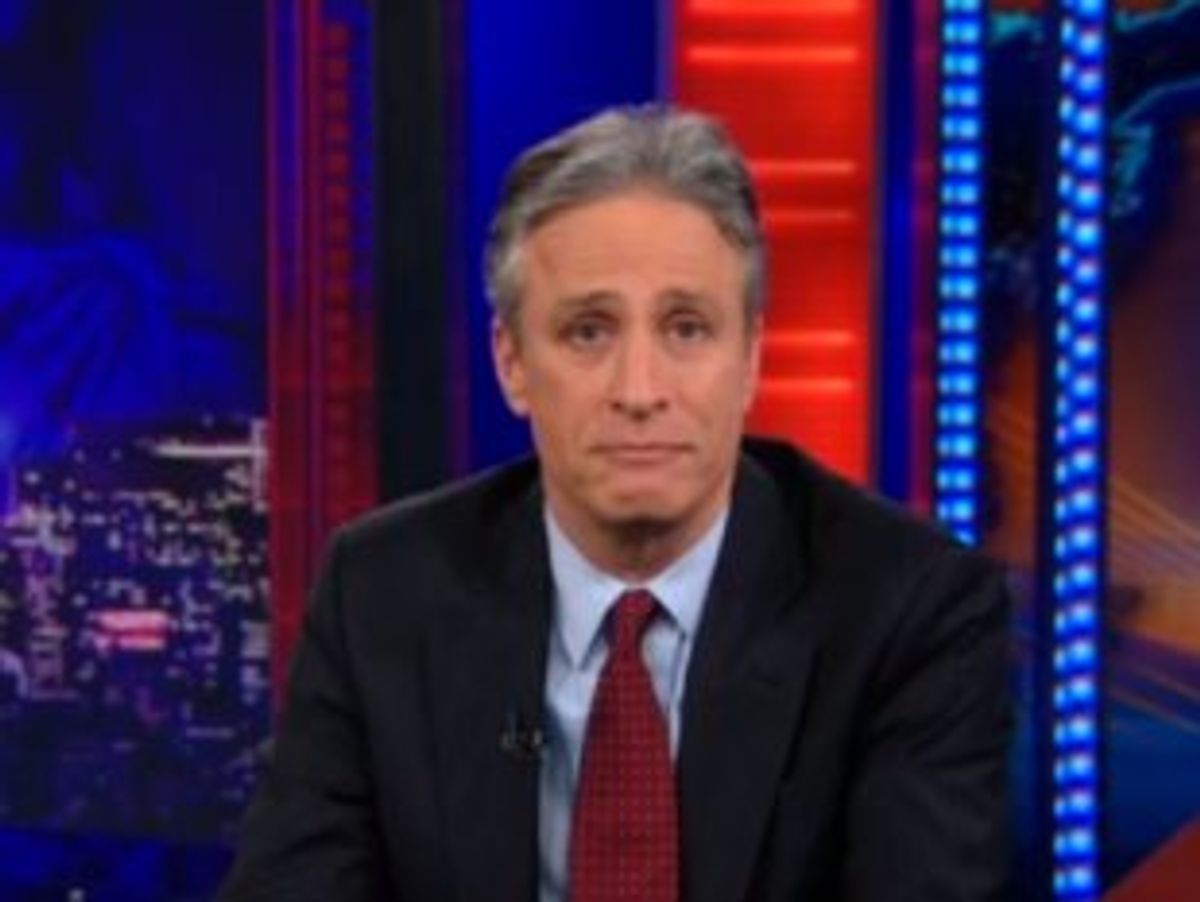 Jon Stewart has changed late-night television for the smarter, but "The Daily Show's" satire kingpin has a way of cowering before powerful people when they come on his set for interviews, not asking the tough questions. It's a stark contrast from his hard-hitting comedy sketches and reviews of the day's news, where Stewart and his coterie of correspondents can really bare their fangs. Stewart's guests on set are often the same people he lampoons, but something changes when they are in the room ... easy targets get kid gloves. Here are seven of Stewart's weakest interviews.

7. Paula Broadwell: He had her, right there in front of him, the woman who helped bring "King" David Petraeus' military and political career to an ignominious end. But he, too, like the mainstream media, seemed too busy having sex with Petraeus' exalted mythology. Sure, that legend was obviously more full of holes than the Bush administration's shifting rationales for bombing Iraq, but Stewart and Broadwell's awkward interview was nevertheless well-stocked with the same mini-legends making their way through the mainstream media's complicit coverage of Petraeus' bankrolled rise: his insane work ethic and meteoric popularity, his fairy tale meeting with Broadwell and their, ahem, scholarly research for her unfortunately titled book "All In."

Stewart played along with the CIA's well-circulated interview script, making for a historically embarrassing bow-down and sadly missed opportunity. "That was the most awesome sellout I've ever seen in my life," Stewart said, when Broadwell finally did mention her husband, whom she argued just wants her to sell more books. "I'm the worst journalist in the world," he said later about the Broadwell interview.

6. John Yoo: Torture memo pimp to the Bush presidency John Yoo isn't exactly an intimidating physical or even intellectual presence. His perverse interpretation of constitutional law and justice helped grant legitimacy and immunity for everything from America's sadistic post-9/11 torture to its continuing global civil liberties abuses at home and abroad. But when Stewart had him in the studio, he folded and later lamented that Yoo "slipped through my fingers. It was like interviewing sand." Some have claimed Stewart had no chance at nailing down a slippery lawyer like Yoo, who can simply pin his infamous legal capitulations to the Bush administration onto the Constitution. But Stewart could've at least asked Yoo why he felt no crisis of conscience in doing so, rather than ask what his law students thought about his trip to "The Daily Show."

5. Condoleezza Rice: Speaking of Bush administration lightweights, Stewart also played soft and nice with Secretary of State Condoleezza Rice in 2010, when she visited "The Daily Show" to hawk her memoir "Extraordinary Ordinary People." Rather than spending time taking Rice to task for her complicity in screwing ordinary people throughout Bush's two terrorizing terms, Stewart sounded "starstruck," as the Baffler complained. He asked lightweight icebreakers like, “What does the burden feel like on a day-to-day basis, agree or disagree with the policy?” and plugged "Extraordinary Ordinary People" with praise like, "I’m telling you, you gotta pick up [Rice’s book] about a patriotic American who is, if I may, doing the best that ...” without even being able to finish. Rice has been on "The Daily Show" a few times, none of them memorable.

4. Rally to Restore Sanity and/or Fear: It was an amazing accomplishment for two titans of late-night satire: The National Mall, packed with 200,000 people, days before the 2010 midterm elections. But instead of using that bully pulpit to chart a realistic path forward for a political landscape notable for its callous right-wing intransigence, Stewart and Stephen Colbert instead threw up a variety show marked by vacant rhetoric. What happened after the rally put the lie to the rally's naive hope: Not only are Democrats and Republicans fighting each other more than before, but with a congressional favorability rating of 9 percent, their frustrated citizenry has pretty much given up on them entirely. By using a video of cars merging into Holland Tunnel as a lame visual aid for bipartisan comity, Stewart and Colbert turned a patriotic political opportunity into corporate marketing for their shows and personas. "If you’re going to have a rally where hundreds of thousands of people show up, you might as well go ahead and make it about something,” Bill Maher ranted.

3. The Wrong Cheney: When Stewart interviewed The Dick's wife, Lynne Cheney, in 2007, he sabotaged himself right off the bat. "This is very uncomfortable," he bombed, "only because, you know what? Here's the thing: You're not your husband, and it's not fair to challenge you on things that aren't you." Right, like Cheney's wife was on "The Daily Show" only to promote her sappy memoir "Blue Skies, No Fences" and not cheerlead her husband's corrupt administration, which she did as well. Stewart should have gone for broke after Cheney gave Stewart a Darth Vader doll at the interview's outset.

2. The Drone Zone: The conscientious upstarts at CodePink recently gave Stewart a vagina, and even dressed him in a pink T-shirt, for bringing more public scrutiny and satire to CIA directorate nominee John Brennan's unhealthy love of asymmetrical, inaccurate drone warfare. But Stewart faltered when he had a chance to dig deeper into privacy and sovereignty invasions and controversies with Melissa "Missy" Cummings, the MIT professor of aeronautics who was pimping PBS' "Rise of the Drones," which received underwriting from Lockheed Martin and the Koch brothers.

"Is it easier to lose sight of its killing power, given the distance that you have from it?” was the furthest he could stumble down "Rise of the Drones'" slippery slope, eliciting scorn from progressives as well as conservatives at Stanford's millennial-minded PolicyMic, which counts none other than Condi Rice as one of its "thought leaders." Stewart uncritically chilled as Cummings droned on about how drones are making war safer, despite the fact that they arguably kill as many if not more civilians than actual "militants," who themselves aren't even verifiable. Clusterfuck city.

1. Science for Dummies: What's great about Stewart is his ability to casually navigate the mediator's common ground. But he sometimes uses that middle way as an exit route from major stresses needing better analysis, which is why Stewart's interview with theologian Marilynne Robinson caught recent flak. "I’ve always been fascinated that, the more you delve into science, the more it appears to rely on faith," he argued, although the opposite is true. Finding too much faith in science when he could have spotlit more science inspired particularly nerdy blowback from Discover, whose awesomely titled "Jon Stewart Doesn't Understand How Science Works Even a Little Bit" took him to task for mashing his antimatter and dark matter. It sounds like nitpicking, until you realize that astronomy explains how planets live and die, whereas we invented God to process the existential horror that beings on those planets live and die according to astronomical whim. No one's perfect, but arguing in our technocratic 21st century that science you can't see is just more faith-based invention is like pointlessly throwing sense and reason down a black hole. And we've already got Fox News for that.