"The Americans" gets entangled in psychological spy games

Wednesday night's episode started out lame, before redeeming itself with a dark and interesting plot twist 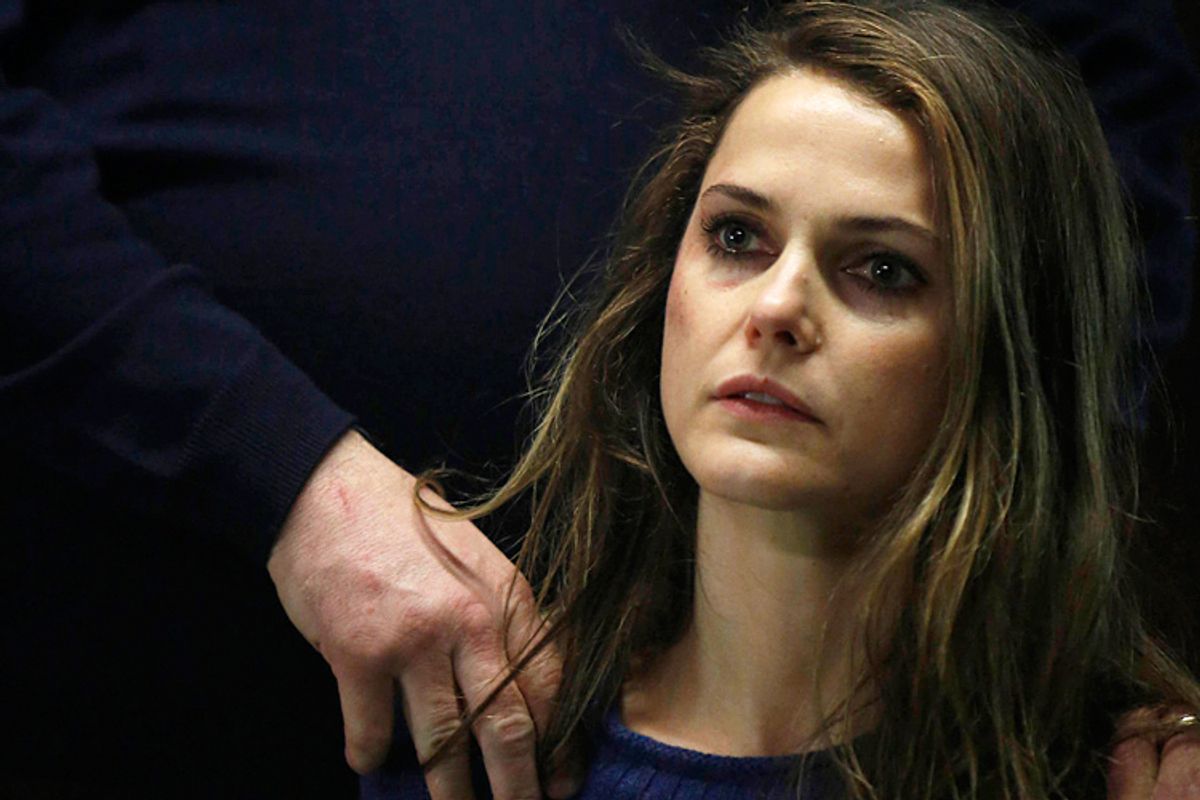 I want to pay “The Americans” a compliment, but to do so, I have to start with an insult. I was really irritated and bored with the first half of last night’s episode — “Trust Me” — in which first Philip and then Elizabeth appeared to be captured by the FBI, who torture them, and Phil especially, in the hope they will confess their true identities. I was bored and irritated because it just so obviously could not be the FBI that had captured them. That’s a plot point we’re not going to see for a few seasons, at least, because it will mean the show is pretty much over. And besides, the Russians had just realized they had a mole in their outfit: Clearly they had captured Elizabeth and Philip, and were testing them to make sure they hadn’t flipped. (This is a particular spy-genre trick I’ve seen before, like in that bad-but-sort-of-fun to watch Colin Farrell–Al Pacino movie “The Recruit”; also, if the Russians meant it, they would have kept Philip and Elizabeth for more than an afternoon.) This is, in fact, what had happened, but when Elizabeth and Philip figured out it was the KGB doing the physical and psychological assaulting, “The Americans” got original and dark.

Upon finding out it was the Russians holding them, Keri Russell’s Elizabeth brutally beat her handler Claudia (Margo Martindale) in a burst of outrage and anger that they would ever, ever distrust her. I am not a huge fan of television violence (I’ve been recently hung up on how the great “Justified” keeps killing people like it’s playing a video game), but I am really amazed at just how interesting fisticuffs become when perpetrated by a pint-size woman with the psychological makeup of Elizabeth Jennings. A man beating someone in anger is something we’ve seen a million times, but Elizabeth's loss of control resonated differently.

As a woman who has — the show has made clear — gotten used to using her body in all sorts of unpleasant ways, physical danger is not what gets to Elizabeth: She’s pretty shut down about the acts perpetrated on her body. Last week she eviscerated Philip for wanting to beat up the creepy source who had whipped her with a belt — “You’re not my daddy” — but this week, she was the one losing control. Elizabeth is not motivated by a protective or even self-protective instinct — it was Philip who had been physically tortured, not her — but a sense of personal betrayal. And for someone superficially inured to physical violence, when truly hurt, it’s what Elizabeth resorts to. (And even in the realm of feelings, Elizabeth lashes out. Later in the episode, when she knows she's done Philip wrong, she still escalates the psychological warfare, handing him jewelry that clearly has emotional significance to give to another woman. It's a cruel move, an "I don't care" instead of another apology. For better and worse, and maybe because she can't help herself, she really is tougher than him.)

The captivity also did more to drive a wedge into the Jennings’ marriage than anything else we’ve seen this season. In the aftermath, Philip realized the reason they were suspected at all is because Elizabeth must have told the KGB he couldn’t be trusted. She confesses, sadly, to telling them “he liked [America] too much.” Having watched the show from the beginning, we know she’s right: In the pilot he was well on his way to defecting, and only didn’t because he loves his wife too much. But that’s why Philip is so angry: Until recently, Philip loved Elizabeth more than Elizabeth ever loved Philip, and if things seem to be changing, this incident was a reminder that they may not have changed as much as he would have liked. The betrayal that hurts him most is hers, but the betrayal that hurts her most is still the Motherland’s. It's always coming second that has him sleeping on the couch.