Do feminists care if you take your husband's name?

The battle over maiden name versus married name heats up again 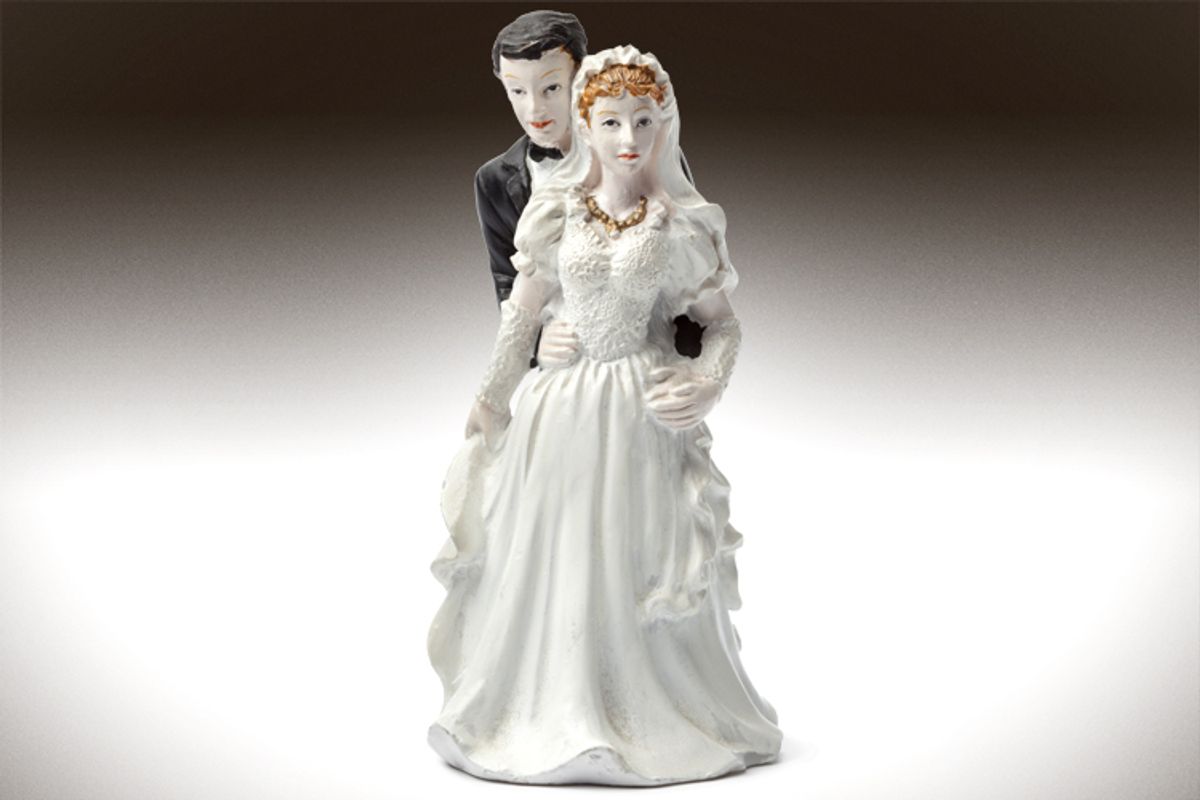 Of all the battleground issues for feminism – reproductive freedom, pay equity, institutionalized violence and rape culture – how significant is that most intimate and unique one: our last names? Or, as Jill Filipovic, wearing her admitted "cranky feminist" hat, asked in the Guardian Thursday, "Why, in 2013, does getting married mean giving up the most basic marker of your identity?"

The statistics tell the story. Even after generations of women have had the opportunity to keep their birth names after tying the knot, the vast majority -- roughly 90 percent -- still prefers to adopt their husbands'. Fewer women retain their names now than did in the 1990s. A 2009 Indiana University study found that over 70 percent of Americans believe a woman should change her name when she gets married, and roughly half think it should be legally required. When the study came out, IU professor Brian Powell noted, "If names are a core aspect of our identity, this is important." And a Pennsylvania State study last year found that the rate of respondents who agreed that "a woman keeping her name was less committed to her marriage" had leapt from 2.7 percent to over 10 percent in a 15-year span.

The knee-jerk assumption that matrimony equals a new identity for only one part of the couple deserves to be challenged. The arguments that it's easier or – my favorite – less confusing for everybody, especially one's future children, are silly. I've happily always stuck with my birth name, and the most controversial things that ever came out of it have been a Christmas card or two with the wrong last name on it, and one real-estate agent who told me a co-op board would be concerned about a name difference (which, P.S., was unfounded and ridiculous). My kids, meanwhile, have somehow always been able to figure out who their mother and father are, as have their teachers, doctors and friends.

Yet Filipovic, whose words of wisdom I usually admire greatly, misses key marks here. For starters, she cheekily suggests that if the issue is mere simplicity and ease of family unit blending, why not take a wife's name? I agree that we need to look beyond a default setting of "one male figurehead and a singular name." I believe that men and women should be encouraged to explore what works for them, instead of being punished for taking their wives' names. But I don't, like Filipovic, believe that adopting women's names is a hot idea because it'll give men a sense of the punishing "psychological impermanence" women endure.

And significantly, I'm concerned that Filipovic only passingly mentions that "wider legalization of same-sex marriage … will challenge the idea that there are naturally different roles for men and women within the marital unit." Marriage equality is radically changing our notions of what it means to be a bride or groom, a husband or a wife. Gay couples are combining names, hyphenating them, creating entirely new ones, or taking a tip from my own little pool of straight women and just keeping their own names. And though it's still too new to gauge the impact that will have on naming trends, our heteronormative assumptions about what to put on the welcome mat are rapidly flying out the window.

But the main sticking point of Filipovic's plea for a change in how we view our names is her broad assumptions about identity and male-female marriage. She writes, "When women see our names as temporary or not really ours, and when we understand that part of being a woman is subsuming your own identity into our husband's, that impacts our perception of ourselves and our role in the world … and feeds into a female understanding of self as relational – we are not simply who we are, we are defined by our role as someone's wife or mother or daughter or sister." That's a lot of projection on a whole lot of women. And when she tells women, "Ask yourself if you should be marrying someone who thinks your identity is fundamentally inferior to his own," that's a whole lot of projection on a whole lot of men.

I doubt my friend who took her husband's name after a childhood of constant sexual abuse from her father was doing it simply because she sees herself entirely as "relational." In fact, I know why she did it. She told me. It was a convenient opportunity to make a clean new persona for herself. I believe that all – OK, most, because I have come upon some pretty backward-looking bridezillas in my time -- of the women I know who've taken their husband's names are not pawns of the patriarchy, operating instinctively off "several thousand years of gender-based discrimination." Some people just like tradition. Or they prefer their husbands' names. Or they talk about it as a couple and come up with what they like best. Who cares? Yes, our names are important. Not because they reflect either the degree of our commitment or our ignorance, but because they reflect who we are in a time in our lives. And who we are right now isn't always the person we were when we were born.

I wish that the burden/joy of naming choice didn't fall so disproportionately on heterosexual women. I wish that the overwhelming assumption of marriage was not still that it involves a bride and a groom, and that the bride will automatically absorb herself into her husband's family clan name. But I don't believe every couple is motivated by the same ideals, or that what's right for me is what's best for everybody else. It's about having choices, and respecting them. That's what feminism does best.