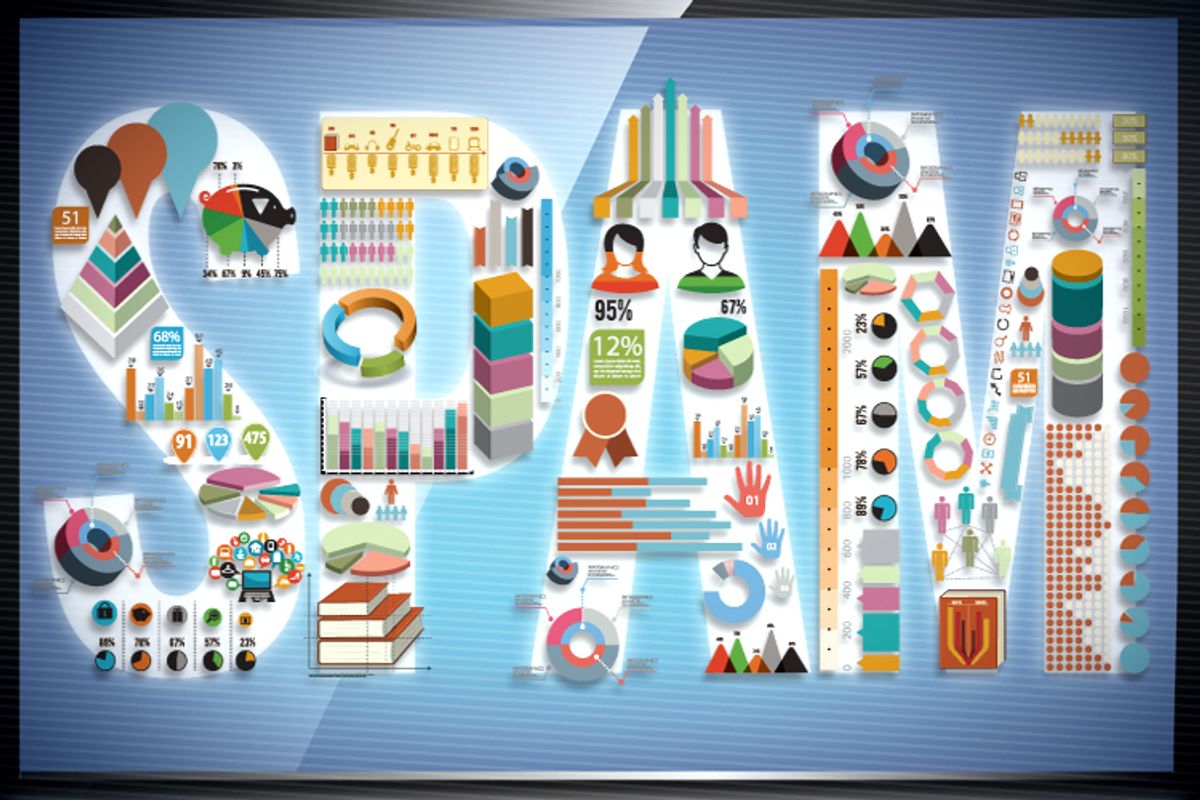 The pitch always seems so friendly and flattering. Someone out there on the Web has noticed that you are interested in a particular topic. It could be the digital divide, or climate change, or Elon Musk, or even the Oxford Comma. It could be pinned to the news of the day or something that you might have blogged about five years ago. It could seem completely random.

But the pitch itself rarely varies. "Allison" or "Alexandra" or "Tony" represents a team of designers and researchers that has created an "infographic" that they'd love to "share" with you. Score!

Combinations of words and texts that try to simplify complex or hot-button issues into a stylish and simple presentation, these infographics are often elaborate and sometimes even (although definitely not always!) informative. Compared to your typical wordy, wonky article on the dangers of, for example, high fructose corn syrup, they go down easy, smooth milkshakes for a thirsty world of short-attention-span readers. And in a media universe desperate for cheap content, the price is right: absolutely free!

Well, except for one thing. One little thing: A “quality” link back to the website that created the infographic. But don’t worry, that won’t be much trouble at all for the time-starved blogger or editor. All you have to do is embed the infographic using the code handily provided.

Doesn't seem too much to ask, does it? Until you investigate further and discover that by incorporating these infographics into your website, you are not only probably violating at least the spirit of Google's guidelines on Web spam, but you are also quite likely steering unsuspecting visitors to websites bankrolled by the for-profit education industry. Embedding that catchy infographic in your blog post has made you an unwitting cog in the student recruitment machine for outfits like the University of Phoenix and DeVry and Kaplan. To add insult to injury, you are also helping stuff taxpayer dollars into the pockets of Internet marketing companies who are operating right out at the bleeding edge of unethical search-engine-optimization.

Infographic spam. It's everywhere, clogging up the Web like kudzu, warping Google page-rank algorithms to boost the profiles of websites that pretend to be providing a public service, but are actually bottom-feeding scum-suckers. Maybe it's no surprise that part-time, amateur bloggers fall for the scam with regularity, but you can also find these infographic Trojan horses at name-brand media outlets. Not every freely offered infographic leads back to the for-profit schools, but enough do to make the case that we should all be wary of where the pretty pictures are taking us. Don’t get trapped by the link bait.

Last week I wrote a story on how some odd emails from the "compliance" team at BachelorsDegreeOnline.com led me into the unsavory, taxpayer-dollar-wasting world of online for-profit college recruitment. The piece resulted in a slew of emails from readers who had gone through a similar process of enlightenment. One reader told me about a variation on the "link removal request" spam that I had identified: "share our infographic" emails that he traced back to websites that looked a lot like BachelorsDegreeOnline.com.

I started digging. I soon found scores of education-themed websites that claimed to be producing their own high-production-value infographics and offering them free of charge to bloggers and media outlets across the Web. A partial list, discovered in just a few hours of Googling, includes CollegeAtHome.com, OnlineITDegree.net, OnlineCriminalJusticeDegree.com, EngineeringDegree.net, OnlineGraduatePrograms.com, ForensicPsychology.net, OnlineColleges.com, OnlineSchools.org, and OnlineDegrees.net

There are surely many, many more. All of these sites share a few things in common. Their core feature is a matching service that purports to find the right school for your particular interests. That school almost always turns out to be a for-profit college. The sites also tend to be secretive. The domain name registration details are usually hidden via privacy services. There are no details on who owns or runs the site; no phone addresses or lists of staff.

And for good reason: While the sites claim to be helping visitors learn more about their educational options, they are in fact in the business of lead-generation for for-profit colleges. Their purpose in life is to gather your personal information and sell it.

As I tried to track down some of the people who were actively trying to place their infographics on other sites, it occurred to me that I'd been seeing the word "infographic" pop up in my own email on a regular basis. I ran a search on my spam and deleted mail folders. Bingo! "Alexandra Campbell" had "created a resource-rich inforgraphic [sic] that I think you might be interested in." I emailed her, and a few hours later she pointed me to an "unprepared for college" infographic at the site CollegeAtHome.com. The infographic (which one can find, by the way, at presumably reputable media sites like USA Today) contains alarming numbers concerning high dropout rates at U.S. colleges. Which is ironic, because the schools suggested by collegeathome's "find a school online" feature are invariably for-profit colleges that boast some of the highest withdrawal rates of any colleges in the country.

I asked Alexandra why she was so eager to share her infographic. She told me it "was created as part of our project’s larger mission to build a free Web resource rich with educational material for those interested."

I asked her who owned collegeathome.com and why the "find a school online" feature always sent me to for-profit colleges. She declined to answer.

Two days later, as I started writing this story, I received another infographic email, this time from an "Allison Lee." Her infographic illustrated how climate change was destroying the Earth, and it was linked to a site called learnstuff.com. Intriguingly, Allison also misspelled "infographic" as "inforgraphic" and she also told me, when I asked why she was so interested in sharing it, that it had been "created as part of our project’s larger mission to build a free web resource rich with educational material for those interested." Alas, Allison also clammed up when I told her I was writing a story about the link between infographic spam and for-profit college recruitment.

Based on the excellent reporting of ITWorld's Dan Tynan, I believe both Alexandra and Allison, if they actually exist, work for a Houston outfit called Consumer Media News. CMN apparently owns a large number of education-themed lead generation sites. CMN did not respond to my press inquiries.

The pattern kept repeating itself. I found, via Twitter, a guy named Tony Shin, who was pitching a "gamers get girls" infographic affiliated with onlineuniversity.net to bloggers who seemed interested in gaming. I told Tony, via a tweet, that I was writing a story about infographics. "Whoa, sounds interesting," he responded. "I"ll shoot you an email."

But he never did. There are clear limits, it appears, on how much information all these infographic designers are willing to share.

And then one of the biggest players in for-profit college online marketing knocked right on the front door of Salon. Amazingly, just hours after I described to my editors my idea for the story you are reading right now, Salon's editor-in-chief, Kerry Lauerman, received the following email.

My name is [Redacted] and I am the Online Media Coordinator for OnlineSchools.com. I’m reaching out to share an infographic we recently launched entitled, “The Oxford Comma: Decried, Defended, and Debated” that would be a great fit for Salon.

I look forward to hear from you, Kerry.

I'll give OnlineSchools.com credit for knowing that Salon cares deeply about the Oxford comma. There is no question that this message was different from your average infographic spam. For one thing, it came with a phone number. For another, it also included the name of the owner of OnlineSchools.com, an Internet marketing firm based in Foster City, Calif., called QuinStreet Inc.

I recognized that name from my previous reporting. Last July QuinStreet agreed to pay a fine of $2.5 million in a voluntary settlement with 20 states attorneys general after getting caught operating a group of military-themed education websites that gave the strong (but utterly unwarranted) impression of being affiliated with the U.S. government. When, in fact, the sites were actually lead generators for for-profit colleges desperate to boost their enrollment of former members of the U.S. military . (For-profit college recruiters will pay top dollar for leads on military personnel for financial reasons that have to do with the government cap on how much revenue a for-profit college can derive from student loans.)

QuinStreet is a public company with name-brand venture capital investors. Former basketball star and U.S. Sen. Bill Bradley sits on its board. For its most recent financial quarter, QuinStreet reported $90 million in revenue. $36 million was generated by its educational sites. In the company's last quarterly report, QuinStreet reported that "we generate nearly half of our revenue from our education client vertical and nearly all of that revenue is generated from for-profit educational institutions. (Emphasis mine.)

So let's be clear. QuinStreet is in the business of gathering the personal information of people who might be interested in pursuing an education and selling those "leads" to for-profit schools. QuinStreet also works directly as a marketing agency for those schools by featuring them on its network of education-themed websites.

Really? I exchanged a number of emails with the person who wanted Salon to "share" the Oxford Comma infographic. I'm not going to publish her name because I don't think she realized that I was a reporter until midway through our conversation. But her explanation of why OnlineSchools.com was so eager to share its infographics did not strike me as particularly "ethical." First she claimed that her company was "not an advertising company/ad agency of any sort." But QuinStreet's own website calls itself "a leader in vertical marketing ..."

Marketing versus advertising seems like a distinction without a difference. The point is that OnlineSchools.com is working for QuinStreet's clients, and not for the visitors who somehow find their way to the site.

The "media coordinator" acknowledged that QuinStreet's goal was build the "brand" of OnlineSchools.com by "using infographics as a form of content," but when I pointed out that the purpose of QuinStreet's education sites (as explained in the company's own SEC filings) is to gather the personal information of visitors interested in furthering their education and sell it to for-profit colleges, she, like everyone else I've interviewed who happens to work in this particular marketing niche, refused to say another word. As of press time, QuinStreet had not responded to my questions in any official capacity.

Spam is part of Internet life. Figuring out how to game search engines, or how to trick Google's PageRank algorithms are things everybody who makes their living off a website tries to do. There may well be more pressing things to get outraged about than the games people are playing with infographics.

But there's still a real public policy issue here. The for-profit college business model is built on the U.S. taxpayer's back. The vast majority of their revenue comes from federal student loans. Plagued by lousy graduation rates and constant enrollment churn, these schools are in a continuous struggle to recruit new students, a requirement that means hundreds of millions of dollars are spent on marketing through vehicles like OnlineSchools.com and BachelorsDegreeOnline.com and OnlineGraduatePrograms.com. QuinStreet Inc. and the other operators of education-themed websites that work with the for-profit sector are downstream parasites on this flow of taxpayer money. Anyone who runs an infographic produced by these sites, for the express purpose of building their "brand" and boosting their Google profile, is indirectly contributing to this ongoing rip-off, as well as furthering the spread of misinformation to prospective students who are ill-served by this whole ridiculous enterprise.