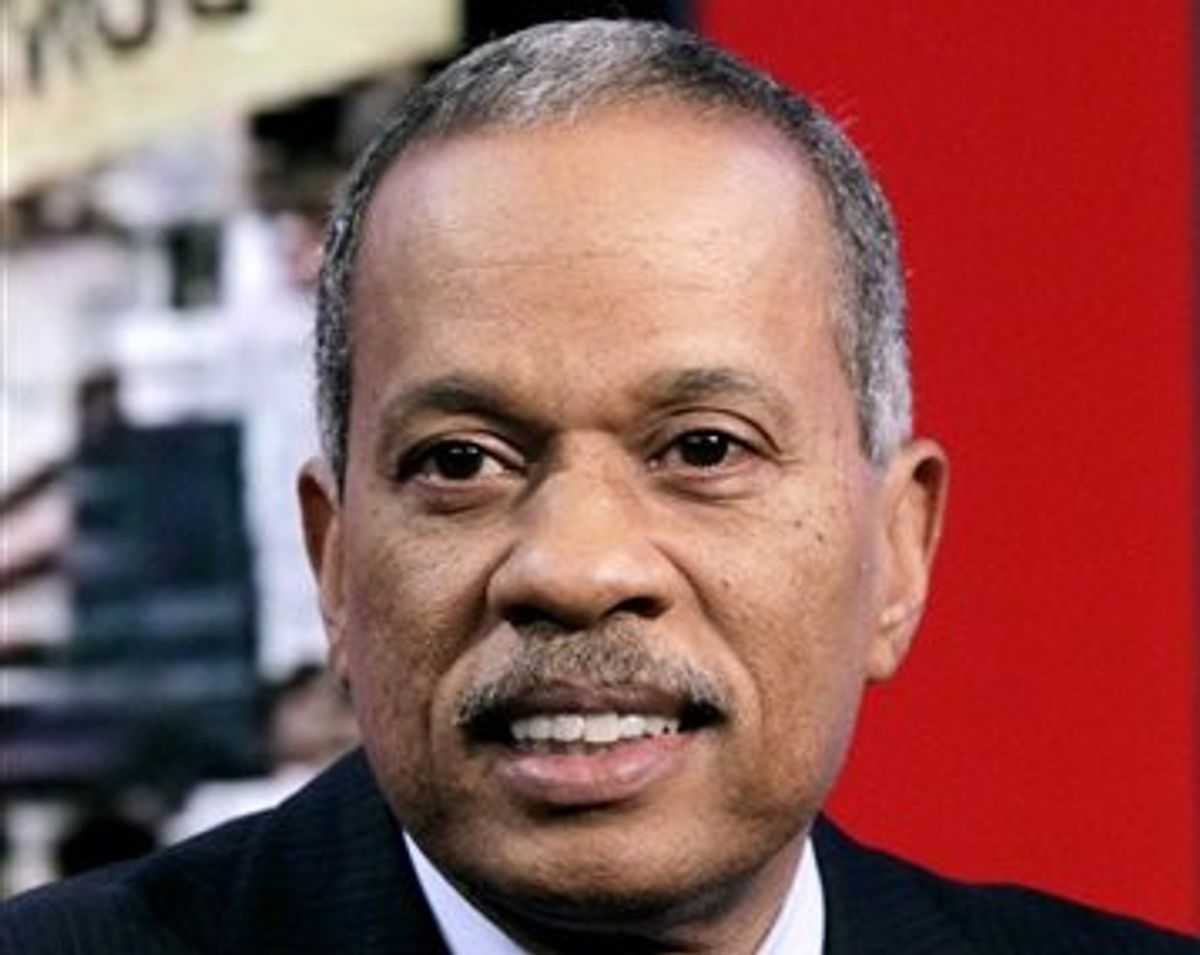 In a case of apparent plagiarism, Fox News pundit Juan Williams lifted -- sometimes word for word -- from a Center for American Progress report, without ever attributing the information, for a column he wrote last month for the Hill newspaper.

Almost two weeks after publication, the column was quietly revised online, with many of the sections rewritten or put in quotation marks, and this time citing the CAP report. It also included an editor's note that read: “This column was revised on March 2, 2013, to include previously-omitted attribution to the Center for American Progress.”

But that editor’s note mentions only the attribution problem, and not the nearly identical wording that was also fixed.

In a phone interview Thursday evening, Williams pinned the blame on a researcher who he described as a "young man."

"I was writing a column about the immigration debate and had my researcher look around to see what data existed to pump up this argument and he sent back what I thought were his words and summaries of the data," Williams told Salon. "I had never seen the CAP report myself, so I didn't know that the young man had in fact not summarized the data but had taken some of the language from the CAP report."

Hugo Gurdon, the editor in chief of the Hill, told Salon on Thursday evening that: "CAP drew the similarities between Juan's column and their report to my attention and I spoke to Juan about it. He went back and looked at the two and spoke to me having had a look and acknowledged there were unacceptable similarities.

"And he gave me an explanation, which I found satisfactory. And I believe there was an honest mistake and it related to the transfer of copy and the use of a researcher and it was completely inadvertent. He was very concerned to set the record straight.

"All parties -- CAP, the Hill and Juan -- were satisfied that we had not dramatically changed the column after the fact to conceal what had happened."

Williams told Salon that the researcher has submitted a letter of resignation, but that he has not decided whether to accept it. "I just feel betrayed," Williams said.

There are three key passages where the CAP report and Williams' original column are similar.

In the first example, here's the original language from the CAP study:

Here's what Williams wrote in the original published version of his February 18 column, as found through a Google cache search:

According to the independent National Foundation for American Policy (NFAP), immigrants will contribute $611 billion to the Social Security system over the next 75 years. Indeed, immigrants are a key force in keeping the Social Security trust fund solvent for older Americans who are at or near retirement. NFAP also found that halting all immigration into the United Size [sic] would explode the size of the Social Security deficit by at least 31 percent over 50 years.

To the first sentence, Williams added the word "independent." In the second sentence, he added "indeed" and turned "key driver" into "key force." He split CAP's second sentence into two, but the language is strikingly similar -- "cutting off" becomes "halting" while "increase" becomes "explode."

But that section of the story was dramatically rewritten and republished on March 2, with the editor's note. Here's how that paragraph is cast in the version of the column that appears online at The Hill now:

The CAP report makes the point. It cites a study on the impact of immigration reform by the independent National Foundation for American Policy (NFAP). That study finds immigrants will contribute $611 billion to the Social Security system in the next 75 years. Indeed, the arrival of newcomers is key to funding Social Security for older Americans who are at or near retirement. NFAP found that halting all immigration into the United States would explode the size of the Social Security deficit. They estimate an increase of at least 31 percent in that deficit in the next 50 years without continued immigration.

In this second example, we've italicized the borrowed wording:

These big gains occur because legalized workers earn higher wages than undocumented workers, and they use those wages to buy things such as houses, cars, phones, and clothing. ... Hinojosa-Ojeda found that the tax benefits alone from legalization would be between $4.5 billion and $5.4 billion in the first three years.

Here's how the cached version of Williams' column reads:

These big gains occur because legalized workers earn higher wages than undocumented workers, and they use those wages to buy things and stimulate the economy through commerce. Professor Hinojosa-Ojeda also calculated that the tax benefits alone from legalization would be between $4.5 billion and $5.4 billion in the first three years.

The revised version not only attributes that to the CAP reports, but the paragraph is rewritten to put the borrowed language in quotation marks. Again, the editor's note mentions only the attribution problem and not the word-for-word echo that now appears in quotes.

In citing that study, CAP attributes the increase in GDP to gains that “occur because legalized workers earn higher wages than undocumented workers and they use those wages to buy” merchandise. That stimulates the economy through commerce.

A third section of the story also appears to have been borrowed and then changed.

In the CAP report:

Jeffrey S. Passel and Michael E. Fix, two respected demographers, recently compared the welfare participation rates of legal immigrants to native-born American citizens. Controlling for income, they found that immigrants had nearly identical -- and in some cases lower -- participation rates than citizens in the three big social programs: welfare, food stamps, and Medicaid. They found that 32 percent of natural-born citizen families at the 200 percent poverty line received food stamps, compared to only 22 percent of immigrant families.

And finally the rewritten column, which again adds an attribution to CAP and quotation marks to the borrowed language, but retains many echoes:

The CAP study also included reference to a report by Randy Capps, Everett Henderson and Michael E. Fix, respected demographers, comparing the welfare participation rates of legal immigrants to native-born American citizens. The Center’s conclusion is that the three demographers show that “controlling for income… immigrants had similar —if not lower — participation rates” than American-born citizens who get benefits from three safety net programs: welfare, food stamps, and Medicaid. They found that 32 percent of natural-born citizen families at the 200 percent poverty line received food stamps, compared to only 22 percent of naturalized immigrant families.

Born in Panama, Williams graduated high school in Poughkeepsie, N.Y., before receiving his bachelor’s degree from Haverford College. He went on to write for the Washington Post for 23 years, and was a host at National Public Radio for 10. After being dismissed by NPR for comments “inconsistent with [its] editorial standards and practices,” he was signed by Fox News to a contract worth an estimated $2 million. He is the author of the acclaimed 1988 book "Eyes on the Prize: America's Civil Rights Years, 1954-1965," and won an Emmy award for television documentary writing.

He has also been awarded numerous honorary degrees.

UPDATE: A 2012 Vanity Fair piece about NPR provides useful context, suggesting that Williams might have been overextended between his various gigs, characterizing his work as "spotty," and asserting that he "missed meetings" and didn't "do his homework."