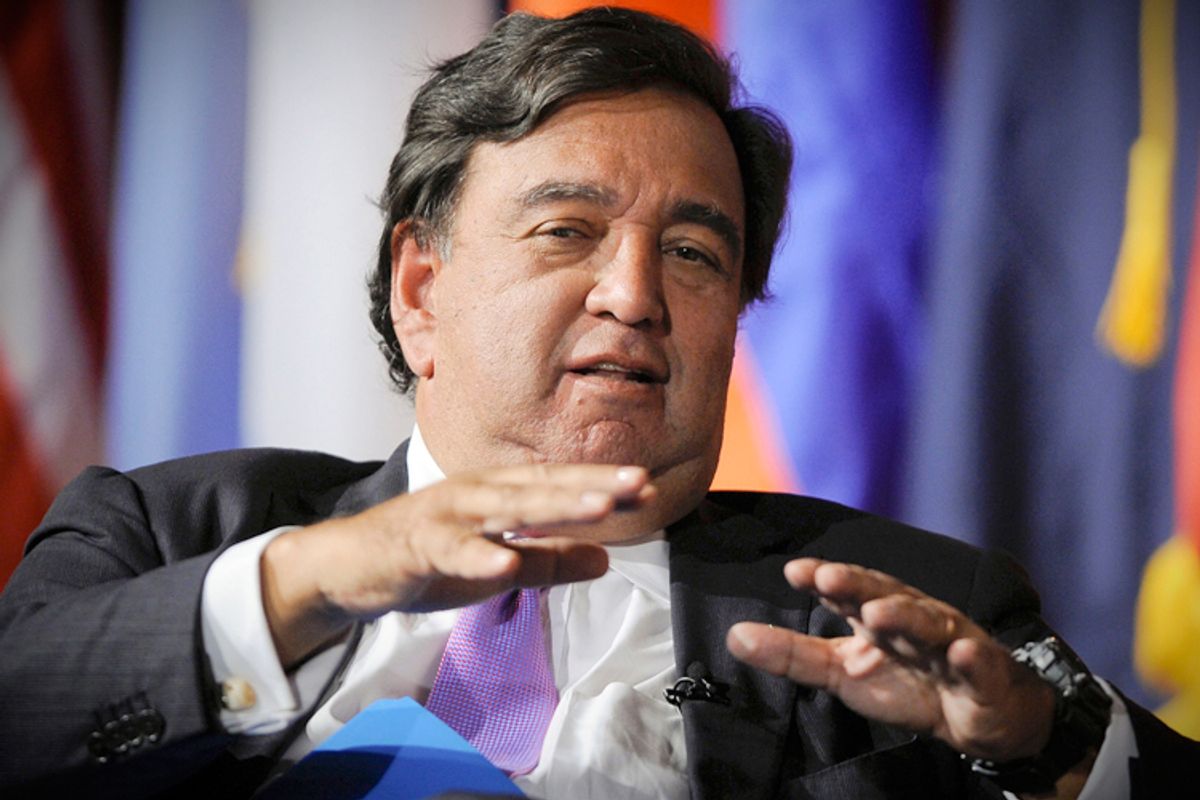 Former New Mexico governor and U.N. Ambassador Bill Richardson has visited North Korea eight times over the past two decades and become one of the most outspoken American thinkers on the hermit kingdom. In an early visit in 1996, he helped negotiate the release of an imprisoned American citizen, and in January he toured the country on a controversial mission with Google chief Eric Schmidt.

The country is in the news this week for threatening a preemptive nuclear strike on the United States after new U.N. sanctions, and after Dennis Rodman's own bizarre visit. We asked Richardson how seriously we should take North Korea's saber-rattling, and if Rodman's visit helps or hurts U.S. relations with the autocratic country.

How worried should we be about this North Korea threat of a preemptive nuclear strike after the U.N. Security Council passed new sanctions? Should we be scared?

My view is that it’s typical North Korean bluster, however the intensity is the strongest I’ve seen, so I do think we have to be cautious and be prepared.

You’ve been to North Korea several times over two decades. Your most recent visit was the first under Kim Jong Un; did you see anything that surprised you or suggested a change under the new leadership?

I did detect a change within the country. People seemed supportive of Kim Jong Un, they seem to be happier, they seem to be more engaged in commerce. We didn’t go to the rural areas, but we did go to a subway station and my sense is that internally, the North Korean people felt that the last missile launch was a triumph for them, but still they’re lacking in basic needs like food and fuel.

I also detected more hostility to the United States than in the past because of the additional sanctions. I explained to them that they should expect that as a cost of their launches and their underground nuclear tests. My sense is the hard-liners in the government and the family members that want a more confrontational policy with the U.S. and their neighbors have the upper hand now.

I know your access is tightly controlled by the government, but did you get the sense that average North Koreans distinguish between the American government and the American people? Do they have animosity for average Americans?

When we talk to officials, I did sense hostility toward the United States, more than in the past. But people do differentiate and I didn't sense personal animosity. But the concern I have is that, while I support the latest sanctions, if we continue a policy of just isolating and punishing, that it drives them further into hostility and  into the government's irrational policy.

So what I would advocate is some kind of non-traditional diplomacy to open up a dialogue with Kim Jong Un. Perhaps at the United Nations, perhaps a special Norwegian envoy, perhaps an NGO, or maybe even a celebrity type that has substance and credibility. Eric Schmidt did some of that when we were there. He achieved almost rock star status with his advocacy for an open and free Internet, so that as a bit of a breakthrough.

Well, we just had an example of very non-traditional diplomacy in the form of Dennis Rodman’s visit. And I'm not sure that went as well as we could have hoped, with him calling Kim Jung Un a great person and everything. What do you make of that? Is it harmful?

No, I don’t believe it’s harmful. I think any time there’s an interaction between Americans and North Koreans, that’s healthy. It’s obvious that Kim Jong Un is a big basketball fan, like all his family has been. Rodman's a basketball player, but I don’t want to diminish his visit. He got to see the new young leader, and no one else has been able to. Not an American and not anyone from any other Western government.

Rodman said Kim Jong Un told him he wants a call from Obama. Do you think Obama should call?

No, no. There should be other channels first. Maybe the man whom we’ve appointed to be our North Korean envoy, Glyn Davies, should make an approach. Or the six-party countries’ special envoy. Or the United Nations. The U.N. secretary general is a South Korean. The World Bank president is South Korean-American. I think we need out-of-the box diplomatic thinking to start a dialogue -- just a dialogue, not any concessions, not any softening of our policy. But obviously what we don’t want is a firestorm in the Korean Peninsula.