Jeb appeared on all five shows to realign himself as an immigration moderate. Ryan appoints himself budget sheriff 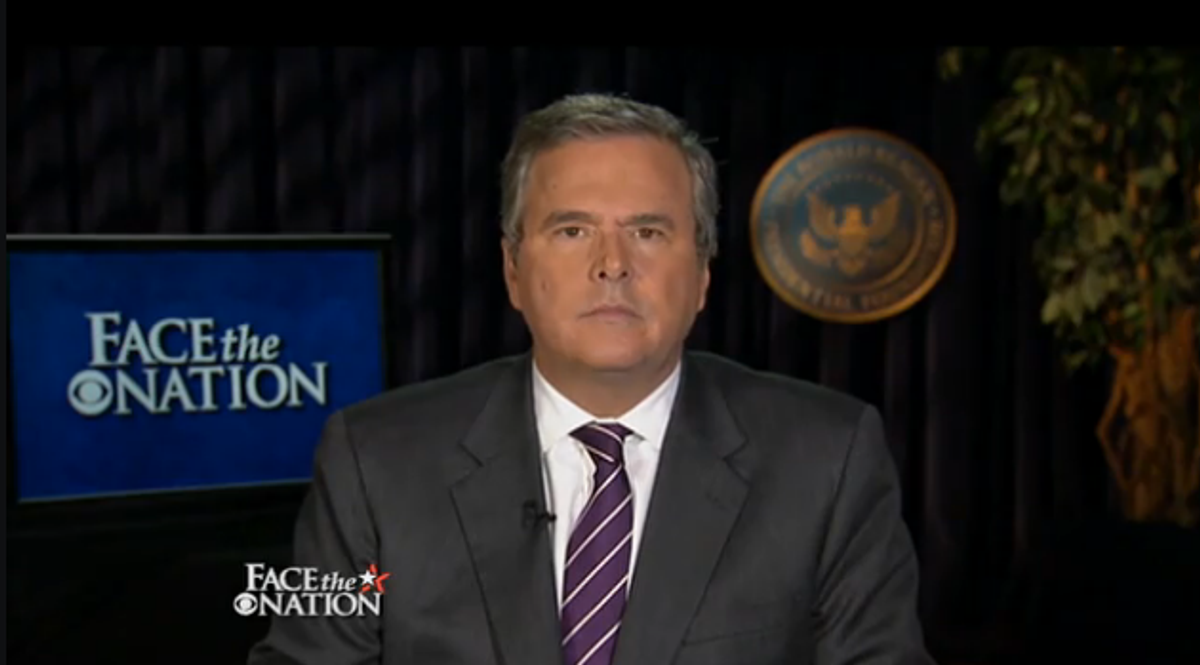 Here are the highlights from today's political gabfests:

Former Florida Gov. Jeb Bush made a full-fledged assault on the Sunday shows today attempting to clarify his position on immigration. Last week he said there should not be a “path to citizenship” for undocumented immigrants, a view he expressed in his new book, “Immigration Wars,” which was written before Mitt Romney got thumped in November and the Republican Party immediately decided that its hard-line immigration stance was not going to fly given current demographic trends. On "Face the Nation," Bush calibrated his stance to bring it more in line with mainstream GOP opinion or what mainstream GOP opinion could become:

I haven't changed. The book was written to try to create a blueprint for conservatives that were reluctant to embrace comprehensive reform, to give them perhaps a set of views that they could embrace. I support a path to legalization or citizenship so long as the path for people that have been waiting patiently is easier and costs less, the legal entrance to our country, than illegal entrance.

Bob Schieffer followed up with the obvious question of whether Bush is adjusting his position because he’s running for president. Bush replied:

Yeah, see that’s the Washington World, the world of everything has to have a personal political ambition, motive. That's not the case. This book was written last year at a time when the tenor of the debate on immigration was dramatically different than it is today. And there were a lot of people that may have believed in comprehensive reform but hadn't been supportive of it. And I'm encouraged to see that that's not the case now, that people are moving in the direction of comprehensive reform.

What this doesn’t explain is why Jeb Bush feels the need to appear on all five Sunday shows – the full Ginsburg in Washington parlance – to clarify his views if he’s not running for president.

Schieffer also spoke to New York City Mayor Michael Bloomberg about his campaigns against both guns and big sugary drinks. Most efforts toward gun control in Washington have focused on rehashing the assault weapons ban that expired in 2004 and was of dubious efficacy; however, Bloomberg set his sights on a national background check for gun purchases since. Handguns, he said, kill 12,000 Americans every year and are the method in an even larger number of suicides. Assault rifles, by contrast, kill 400 Americans annually.

"Federal law requires background checks when a gun dealer sells you a gun," Bloomberg said, "But no background check if the sale is done over the Internet or a gun show. Fourteen states have closed that loophole and in those 14 states the suicide rate is half the national average, and the number of women that get killed in domestic violence is something like 40 percent less than in other states. So background checks do work."

I enjoyed the experience [of running for vice president]. It made it more realistic in my mind, that something that I much better understand.

With respect to running for president, I honestly think that we have a problem right now. That's a budget mess. That's a debt crisis coming.

I'm the chairman of the Budget Committee, and I represent the first district of Wisconsin. I should focus on that. That's to me is the most important thing and I shouldn't be clouding my judgment today by thinking about some political thing four years from now. I should not be clouding my judgment by thinking, how did this position mean (ph) to run for president. I got to think, do what you think is right, how can I help Wisconsin, how I can close this budget gap?

In a recent interview, Ryan suggested to the Washington Post’s Ruth Marcus that he would once again work to hold the economy hostage on the debt ceiling unless the GOP wins concessions from Democrats.  (Though he didn’t use those exact words.) Fox host Chris Wallace didn’t ask about it.