I was a comedy groupie

For three years, I exclusively dated (and slept with) professional funny men. It was hilarious -- and kinda tragic 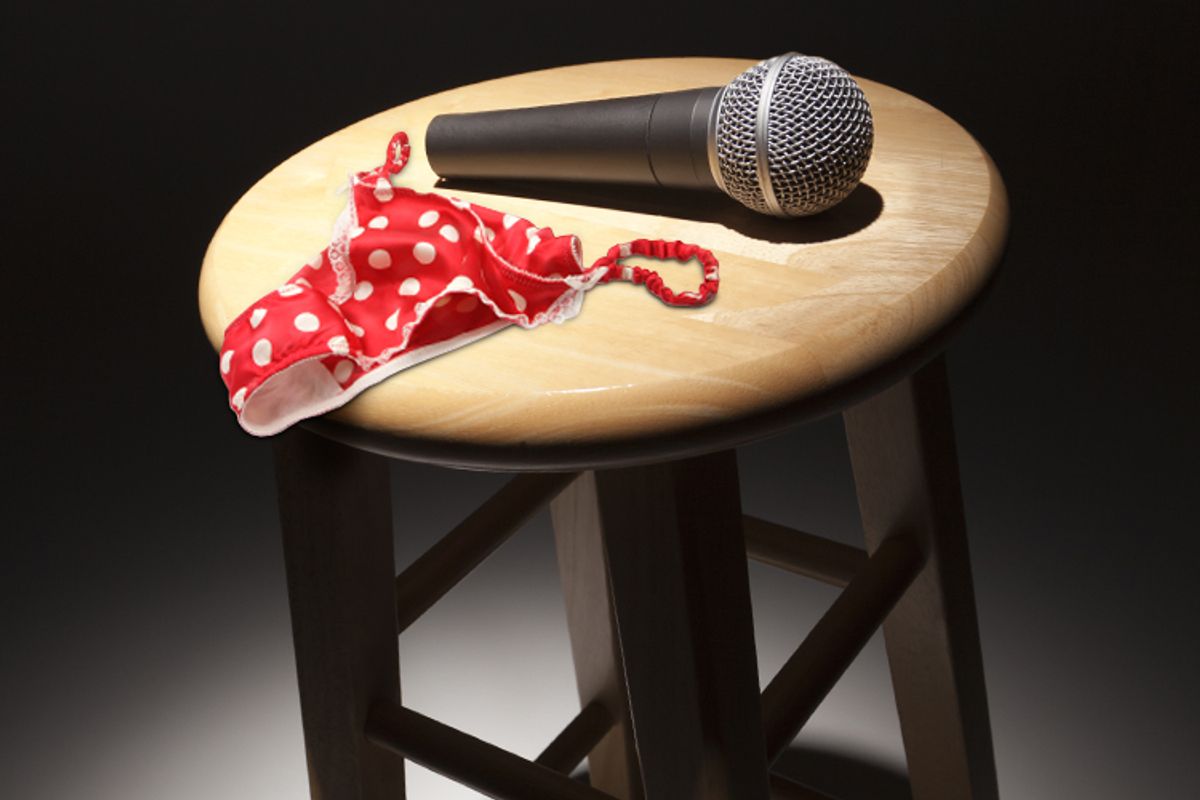 I’m bent over a coffee table, naked from the waist down, in a room on the 28th floor of a downtown hotel. I’d walked by this hotel many times and had been inside its in-house comedy club, but I never cared enough to imagine what the rest of it was like. The room is fancier than I would have assumed, and it’s spacious -- more like a suite, with a kitchenette, bedroom with French doors and a clear view that stretches from east to west, from beach to mountains. I can’t marvel at the view, though, since I’m face-planted into a coffee table strewn with half-empty juice bottles and various iGadgets while an up-and-coming comedian takes a close look at the inside of my rear end.

And then spits in it.

I guess I knew what to expect with this gentleman. I had listened to his podcast, in which he would gloat about how dirty he was in bed. His mix of candor and bravado lured me in. He would never go into details, but there was a knowing boldness in his voice: I go where others don’t.

It completely compelled me. I wanted to go there.

Turns out, that chance wasn’t hard to come by. When the comedian came through my city one weekend, I attended his show and struck up a friendly chat afterward. He was immediately receptive. There wasn’t much persuasion on either end before we were upstairs in his hotel room.

There are a few stock terms to describe the type of woman I am. “Comedy nerd” is one. It refers to a person who is actively involved in the comedy scene without actually being a comedian. Comedy nerds fanatically listen to podcasts, engage in debates on online forums, follow their favorite comedians on Twitter and attend all their live shows. They are hardcore, not casual, comedy fans.

Another term is “chucklefucker,” a charming expression bestowed upon a lady who pursues sexual congress with comedians. In essence, a comedy groupie.

I relate to both archetypes, but I’m not one for labels. I’m simply a woman with self-worth issues who felt better when engaging with a man whose profession involved publically lambasting himself. And for three years, my self-esteem weaned and waned as I exclusively pursued, dated and slept with comedians.

I haven’t always had it so bad for comics. The ones I saw growing up were more like freaks and caricatures, with oversized cigars and wacky glasses. I suspect very few women lined up for a trip to Rodney Dangerfield’s suite. There were exceptions, of course. Eddie Murphy had rock-star appeal, but he seemed superhuman and untouchable. Good luck finding that guy after a show.

But today’s comedians have an attainable and swoon-inducing appeal. Schlubs like Louie CK and Zach Galifianakis have become the alternative version of certified dreamboats like Bradley Cooper and George Clooney. They appeal to a certain girl who likes a scruffy beard and a potbelly and who wants someone to make her burst out laughing in bed. We want them for their brains, not their pecs.

Thanks to Twitter and podcasts -- great democratizing forces of the Internet, and a likely place to find comedians -- professional funny men are increasingly accessible. Go to a show and compliment them afterward. Even the A-listers don’t seem as unreachable because the very act of being a stand-up demands the humbling step of putting yourself in front of the firing squad of us common folk. They’re (desperately) seeking our approval. They’re hoping we laugh. You won’t see Tom Cruise doing crowd work unless he’s on the red carpet and there’s a camera crew from “Entertainment Tonight” to document it.

Plus comedians make themselves vulnerable by confessing their screw-ups and foibles. They define themselves through their insecurities, and many of us find this irresistible. I sure did.

My comedian habit was trigged after a breakup with a man juggling problems that ranked high on the darkness spectrum -- a suicidal ex-wife, a disabled child, alcoholism. My belief that love conquers all imploded when he ended things abruptly, and I was left to absorb months’ worth of emotional crises. I decided it would be best to take a Sharpie marker to my brain and black out all the darkness. Yet there was one thought that kept coming to me in moments of clarity: I just want to laugh.

A few weeks later, a comedian asked me out.

Not just any comedian either. I’d seen him perform a few years earlier and was struck by how undeniably, almost distractingly handsome he was. When he bounded on stage in an immaculately tailored grey suit, he looked like he’d just come from a GQ photo shoot. His act was dorky but endearing, with bits about weekly visits with his grandmother and dating a twin. He warmly engaged with the audience, flirting with women and gently mocking their dates. I fought back any urges to chat him up at the time because I assumed someone so clever and good-looking was out of my league.

So, years later, when he added me on Facebook out of nowhere as I was fighting off depression, I took it as a sign. Here was my chance to laugh.

We quickly developed an online rapport and started spending time together. In person, our connection was immediate and strong. Our lives had eerie parallels: We’d both been born in Ontario and moved around to the exact same cities at the exact same times. We shared similar struggles in school and grew up believing we were stupid. It felt like I’d found that one person who truly got me and my pain. He felt like a soulmate.

I soon became fixated with what I chose to call his “quirks.” When he came over to my apartment, he brought his own tea in a Ziploc baggy. At a movie, he scolded me for continuing to eat popcorn after I’d munched on a piece that had fallen out of the bag and onto my lap. When I tried to hold his hand, he tensed up like dead rat with rigor mortis. His devotion to work was uncompromising. He committed himself to at least one show a night and during the day would lock himself away to write for hours.

Rather than be repelled, I was intrigued. I wanted to unlock his secrets, understand and ultimately fix him. Beneath his genuine warmth and kindness, there was a mystery that I wanted to explore.

I spent a lot of time online deciphering his behavior on mental health forums. Uncomfortable with affection. Lack of flexibility. Excess devotion to work. I hoped to diagnose him. I convinced myself that was what caring people do.

As I became increasingly obsessed with him, he became distant. I manically called him to suggest we explore his quirks. I told him that private people had something to hide and since he was a comedian, he’d better get used to putting himself out there. He exploded.

“This is not part of my plan!” he screamed at me and then hung up the phone. He stopped returning my calls and texts after that.

I hated myself for upsetting him so deeply and spiraled into a long-delayed k-hole of depression. But I began to see that my idea of love was to give as much of myself to another person as I could -- I wasn’t really part of the equation. If I had it in me, I wanted to invest it somewhere else. Now I had no one to give it away to.

I eventually started going to therapy, but I still craved the distraction my “soulmate” had brought to my life. So I dove into the world of comedy to find more thrills. I would attend shows and make a point of sticking around afterward. I devoured comedy podcasts and made note of the comics who intrigued me. I’d send them friendly messages on Facebook, suggesting we meet up when they were in town. More often than not, they’d agree. It was astoundingly easy to get their attention.

The process was intoxicating. Every comic I’d engage with, regardless of how casual, would reveal some part of himself to me that he wouldn’t on stage, and the emotional striptease was often more fun than his act. The way they would open up, pull me close, and confide in me validated me in ways that therapy never could. The moments of intimacy could be startling.

After the wild episode in the hotel with the dirty-sex comic, I lay in bed with him, post-coital. I rubbed his temples and ran my fingers through his hair.

He looked at me, surprised.

“No girl’s done that to me before,” he said. “It feels really good.”

But for all the touching and vulnerable disclosures, there were an equal number of perplexing insecurities as well. Comedians are notoriously sensitive, and I would often be startled by their rage.

I developed a friendly, occasionally frisky relationship with a New York-based headliner whom I grew to deeply care about. He sold out shows and turned down movie offers for roles that didn’t suit him, but even the slightest bit of disapproval would send him into a tailspin.

When I visited his hotel the morning after a packed show, I found him in front of his computer, visibly distraught.

“This asshole doesn’t know what he’s talking about,” he said. I looked over his shoulder. It was a review, written by a student from a local community college and posted on his free blogspot website.

So I coaxed the comedian to the bed -- the surefire way to make him feel better.

In a way, I wanted to be their spotlight -- the thing they looked forward to, the person who brought their flaws to the surface but made them shine nonetheless. They were exceptional, unusual creatures to me, with complexities that inspired me. I wanted to validate them in hopes that it would validate me. I wanted to build them up even at the cost of my own deflation.

For all the things they weren’t -- attentive, thoughtful, fawning -- they offered enough of themselves to keep me hooked. And, most importantly, they distracted me from myself.

But spotlights use up a hell of a lot of energy, and eventually I burned out. My insecurities and self-doubt began to build in ways I didn’t know how to control. I had put comedians and their art on such a pedestal that anything I did with my own life seemed worthless. My focus on my work, my writing, began to suffer. And so did my pride.

I began to wonder -- and worry -- about the reputation I was building within this close-knit community of notoriously critical, judgmental people. Even worse: What if I left no impression at all?

And so, I started to shift my attention to what I’d been distracting myself from so long: my own issues.

It’s been about six months since I was last involved with a comedian. I still go to shows, listen to podcasts and follow some of them on Twitter. But now, if an attraction starts to flicker when I’m watching a comedy show or listening to a podcast, I fight back any urges, find a moment of clarity and remind myself: There are other ways to laugh. There are other ways to live.

Elianna Lev is a writer who lives between Toronto and Vancouver. If you want to get to know her better, visit her website,eliannalev.com and follow her on Twitter @noneandonly