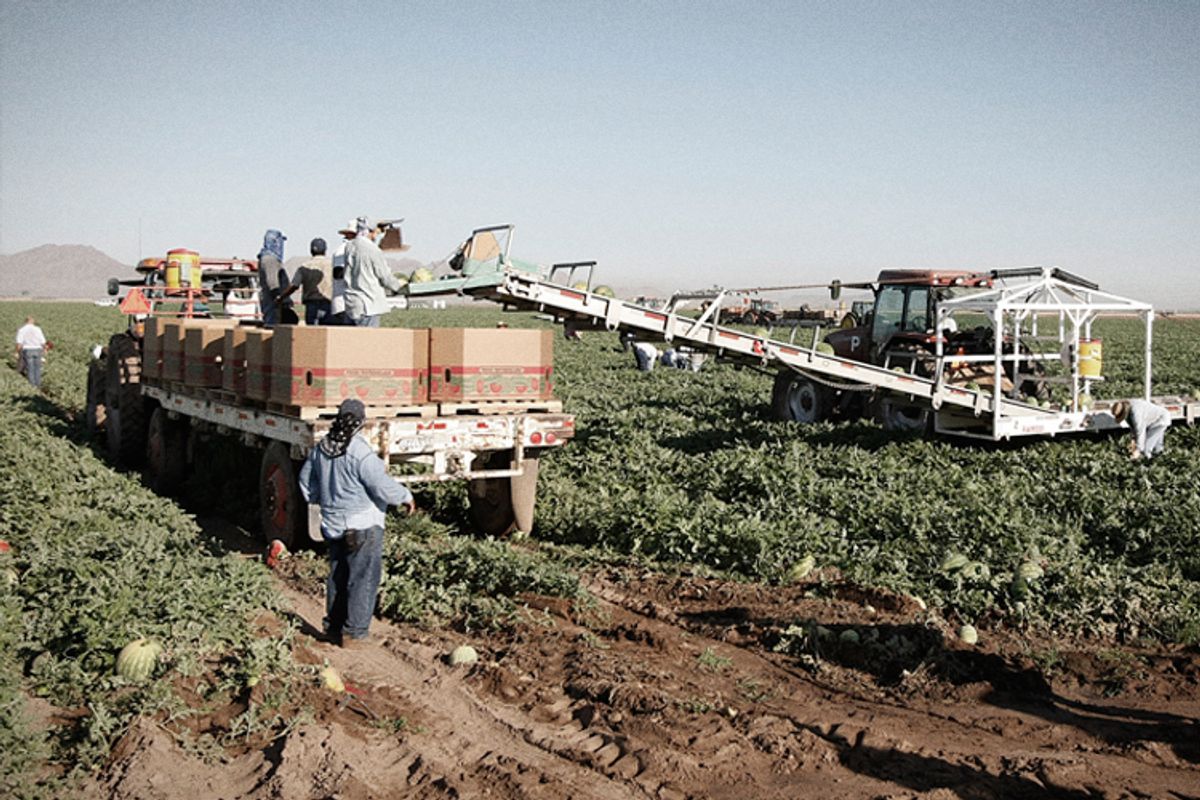 “Senators Agree on Legalized Serfdom.” That should have been the headline. Instead, the Los Angeles Times reads: “Senators agree on path to legal status for illegal immigrants.”

When it comes to proposals for granting legal status to most of the more than 10 million illegal immigrants in the U.S., the devil is in the details — and the details of this reported deal are particularly satanic:

Still undecided is how long illegal immigrants would need to wait before they could apply for permanent resident status and eventually become citizens. The delay for a green card probably would be 10 years or longer, the aides said.

Let’s do the math. A green card permits a foreign national to live and work in the U.S., while applying for U.S. citizenship. Once a foreign worker gets a green card, it takes a minimum of five years to become a U.S. citizen.

So if the report is accurate, then the real proposal is that it will take at least 15 years before today’s illegal immigrants can become citizens — 10 years in legalized limbo status, waiting to get a green card, and then five more years as a green card holder, before being eligible to become a citizen. And that’s a minimum.

Suppose that this became the law and went into effect in 2015. The earliest year in which any illegal immigrant now living in the U.S. could become a citizen would be 2030.

Once granted probationary legal status, immigrants would be allowed to work but would be barred from receiving federal public benefits, including food stamps, family cash assistance, Medicaid and unemployment insurance.

The proposal, then, is to turn most of today’s illegal immigrants in the U.S. into a new, legally resident class of non-citizen foreign serfs. They will be allowed (i.e., compelled) to work for American employers. But they will be denied all the benefits that go to the working citizen poor. And none of them will be eligible to vote for a decade and a half, at the earliest.

Quite apart from its inhumane treatment of illegal immigrants, this proposal is a direct assault on the rights and interests of native and naturalized American citizen-workers.

American citizen-workers are threatened by anything that creates a multi-tier labor market inside U.S. borders. Allowing workers with different levels of rights to compete for the same jobs in the U.S. economy permits employers to pit one category of workers against another. And when one group has fewer rights and less bargaining power, many employers will prefer to hire them rather than the workers with more rights and greater bargaining power.

And consider voting rights. The Southern plantation economy ideal — now being generalized to the entire United States by what was once the party of Lincoln — is that those who work shouldn’t vote, while those who vote shouldn’t work (because they are upper-class drones living off the labor of others). If workers — horrors! — can actually vote, then they might use the ballot to try to put an end to their mistreatment. By delaying voting rights for legalized immigrants as long as possible, America’s cheap-labor employers can exploit them for a decade and a half or longer without fearing that their non-citizen serfs will vote for reforming the system.

But isn’t a path to citizenship — albeit delayed as long as possible, with denial of Medicaid, and so on — a big improvement over conservative opposition to any amnesty at all? Doesn’t this tentative agreement among some senators suggest that at least some conservatives are moving in the proper direction? This way of thinking ignores the fact that there are two right wings — the business right and the nativist right — not just one.

While nativist conservatives reject amnesty for illegal immigrants, the business right sees an amnesty program as a way of obtaining millions of unfree, rights-deprived American workers on American territory overnight.

Not satisfied with the prospect of gaining more than 10 million newly legalized workers without full civil and political rights to use as a serf labor pool, the same lobbyists for low-wage employers are demanding, as part of the deal, expanded “guest worker” programs, to deliver millions more unfree serfs to the U.S. every year. Unemployment is still unacceptably high, particularly among the less-educated — and yet the cheap-labor lobby is insisting that the U.S. is suffering a shortage of low-skilled workers to pick crops, make beds and cook meals.

If there were genuine labor shortages in the U.S., then wages for those positions would rise until the jobs became attractive to citizen-workers. That has happened only in a few cases of specialized vocational skills; for example, in the recent energy boom, scarcity has driven up the wages of welders. But where are the news stories about skyrocketing wages for farmworkers, lawn tenders and hotel maids?

Absent compelling evidence to the contrary, it is safe to assume that any American employer who complains about labor shortages is lying. The idea of allowing supply and demand to operate in America’s labor market is anathema to the crony capitalists of the low-wage business sector. They demand that government provide them with foreign workers at the wages they are willing to pay, not at the wages that a functioning national labor market would produce. In other words, they demand that government use immigration policy to deliberately subsidize their own low-wage industries. They keep the profits, while the costs — including the costs of treating legalized serfs denied Medicaid for accidents and illness — are socialized and transferred to the American public at large.

Speaking of Medicaid, the right-wing employers’ lobby is not only a threat to American workers and immigrant workers alike, it is also a threat to public health. Ask yourself this: Do you really want your hotel room made up or your home cleaned by a legalized serf worker who, because of the denial of Medicaid benefits, doesn’t go to the doctor on getting sick?

Immigration reform requires ranking “bads” and choosing lesser evils over greater ones. It is bad for foreign nationals to violate U.S. laws and become illegal immigrants. But while new waves of illegal immigration could be deterred in the future, those already here are not going to be deported. The only practical question before us at the moment is whether they will be quickly converted into citizens with full economic and political rights, or moved from one non-citizen status — that of illegal immigrants — to a new status of legal but unfree “sub-citizens.” Turning former illegal immigrants into newly legal helots instead of rights-bearing citizens may be the American dream of certain sleazy employers, but it is an American nightmare for immigrants and natives alike.

The citizen-workers of the United States should reject proposals that they be pitted in the labor market against millions of non-citizen workers who are more attractive to employers precisely because they are more miserable and less free. Granting a clean, swift amnesty followed by full and equal citizenship as quickly as possible to most resident illegal immigrants is not an act of charity. It is an act of self-defense by American citizen-workers themselves.