The actor speaks out on rape, telling men to prevent domestic violence 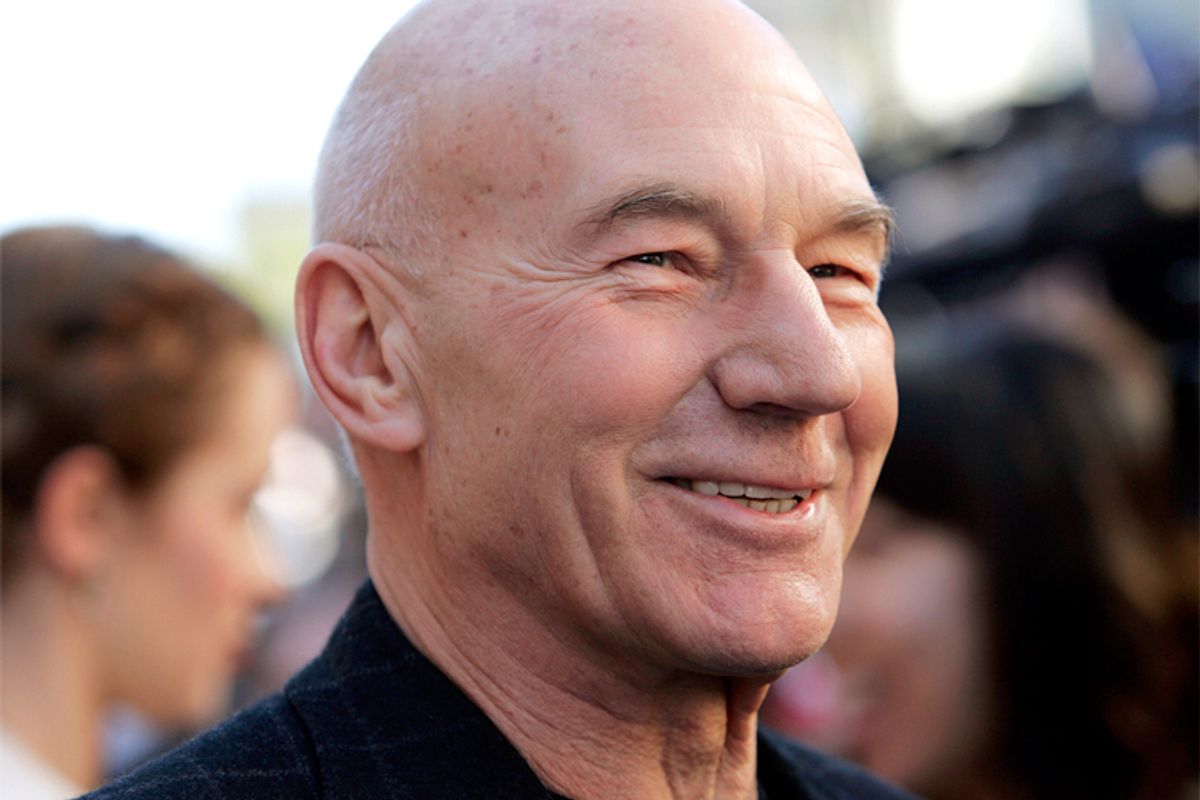 Thank you, Captain Picard. Speaking over the weekend at an event he hosted for Breakthrough's Ring the Bell anti-violence campaign, the actor issued a challenge -- and sounded an important call for 1 million men to make 1 million "concrete, actionable promises" to end abuse against women, the "single greatest human rights violation of our generation."

Stewart's remarks were a well-timed and much-needed statement about the nature of violence against women, the environments in which it blooms and the ways we must recalibrate our expectations to change things. In his speech, Stewart spoke movingly of growing up with a father who was "an angry and unhappy man who was not able to control his emotions — or his hands" and he made a plea for action -- "not an action that will make things better in six months' time or a year's time but action that might save someone's life and someone's future this afternoon, tonight, tomorrow morning." That's a strategy that's tough for a lot of people to get their heads around. We live in a quick-fix world. Change the culture by just making a promise? By speaking out? Come on, can't everybody just get a gun instead?

Depressingly, we are living right in a country in which telling women to carry concealed weapons seems like an easier fix against violence than encouraging people to just not be violent. Last week, Zerlina Maxwell caught all manner of pushback hell for saying, during an appearance on "Hannity," that "We should be telling men not to rape women and start the conversation there." Never mind that she wasn't telling women not to protect or defend themselves. All Maxwell did was broach the subject of involving men, actively and consistently, in the conversation about sexual violence, because "a lot of times it’s someone you know and trust," and the response was so vitriolic she couldn't even look at her own Facebook page afterward.

We need to rewrite the script -- and we need to get way over the idea that men don't need to be part of it, because nice guys already know how to behave and bad guys won't listen. That kind of thinking assumes that the world is black and white, and that there isn't a spectrum of behaviors and attitudes. It conveniently ignores the peer element in cases like Steubenville and Cleveland and Delhi. Violence against women isn't always the act of a lone sociopath. Sometimes it's a bunch of guys, egging each other on. It isn't always a monster in the shadows either. Sometimes it's a man who doesn't even understand how what he's doing to a woman is rape or abuse -- a man who might have acted in a very different way if he'd ever just learned how. That's not a crazy idea. It's an important one.

And here's something else. The fringier, angrier element will tell you that involving men in violence prevention will somehow foster an environment in which men and boys are raised to believe they're all potential abusers. That's not it at all. It's about understanding that behaviors and attitudes are learned and reinforced, and that we have the power to teach and reinforce in a more positive direction. It's about acknowledging that putting all the onus of preventing rape and violence upon women -- and our eternally questioned behavior -- burdens us as the sole gatekeepers of aggression. And worse – it already teaches boys and girls, men and women, that just men can't control themselves. Whatever, gals, it's on you to figure it all out. How is that helpful? How is that respectful to either sex?

At the Ring the Bell event, former NFL quarterback Don McPherson spoke of why we need to rethink how we talk to our sons and our husbands and our co-workers and our friends. "We don't raise boys to be men," he said. "We raise them not to be women, or gay men. White people confronted white people to fight racism. Men need to confront men." Ding! Ding ding ding ding!

Rape and abuse aren't lady problems that we need to fix with our lady solutions. Men and women need to work together on these issues, creating programs in schools, talking openly about solutions. The guy who's going to go on to commit violence against women isn't a nameless ogre. He's somebody's brother. Somebody's son. He's somebody you know, right now. So why wouldn't you want to talk to him now, before it's too late?