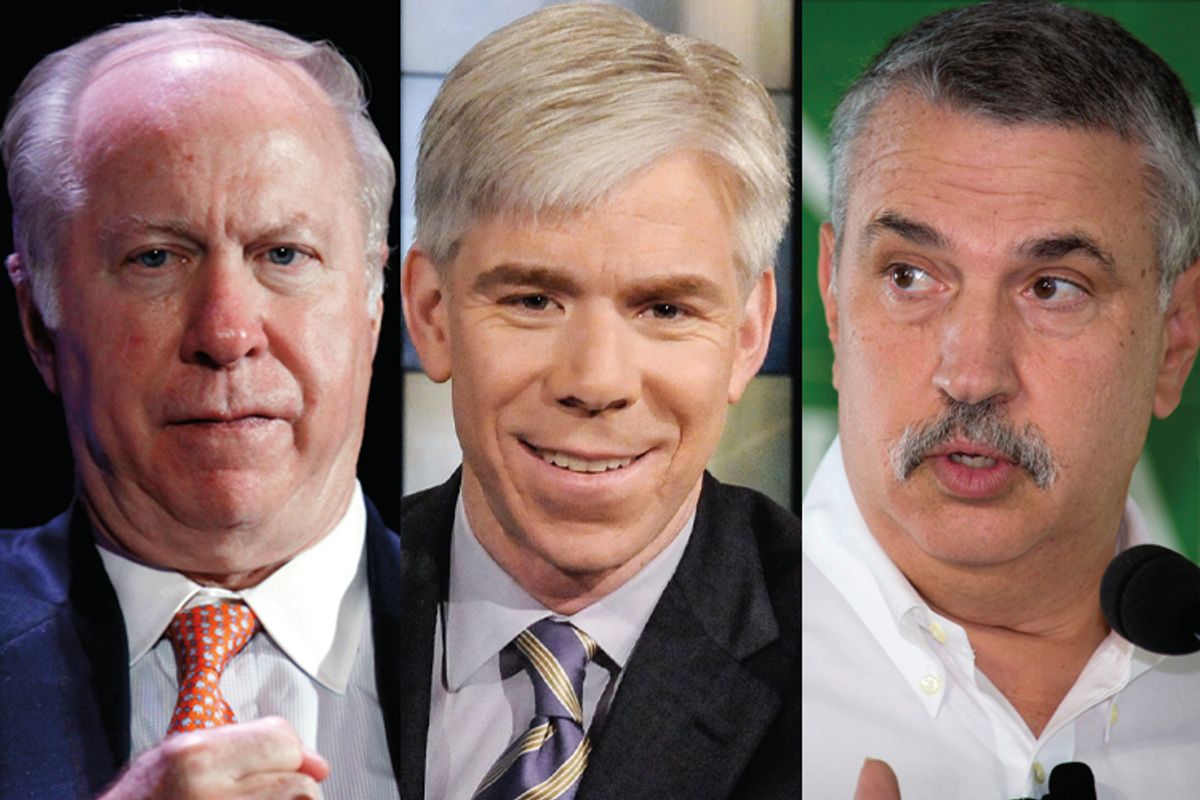 Washington has Grand Bargain fever, again. Thanks to the sequestration, Republican government-shrinking mania and Barack Obama's apparently sincere desire to get some sort of huge long-term debt deal done, the Grand Bargain is looking more possible than at any point since the heady days of the National Commission on Fiscal Responsibility.

For some reason, the options for dealing with sequestration -- a self-inflicted made-up austerity crisis -- are being purposefully and pointlessly limited to a) spending cuts, either those in sequestration or different ones, or b) spending cuts and tax increases. "Let's just not do this, everyone" is rarely presented as a viable option. Instead, the single best end result, according to lots of pundits, Democrats and even Republicans, is tthe Mythical Grand Bargain.

This is awful news, for most people. A "grand bargain" is not going to be good. But after Barack Obama had fancy dinners with some Republicans last week, everyone is again hopeful. The president is hopeful. John Boehner is hopeful. David Gergen is probably hopeful. They can all taste the Bargain. Ooh, it'll be so great when we get that Bargain!

The Grand Bargain is revered, among the Sunday Show set, as a goal essentially for its own sake. Its Grandness is its point. The thought of the parties coming together, agreeing on a mutually unpleasant compromise involving great political "sacrifice" (symbolic sacrifice for the politicians, likely eventual actual sacrifice for the constituents), warms the cockles of the Beltway Establishmentarian's heart. If liberals and conservatives can't stand the deal, all the better, even if one or both sides have perfectly valid reasons for blanching. The Bargain must, by necessity, reduce the deficit by "reining in entitlements." "Entitlements" means Social Security and Medicare, two very popular and successful programs designed to keep retired people alive. Social Security and Medicare "reforms" that make both programs less generous are among the least popular policy proposals in America today, but both parties -- at least, the leaders of both parties -- support them (rhetorically). Cutting these programs is probably the single highest priority of the tiny centrist elite, and it has been for years, excepting the usual run-ups to our various wars. Part of the elaborate theater of Performing Seriousness in Washington is claiming that "everyone agrees" that the cuts are urgent and necessary, while also bemoaning that no politicians are "brave" enough to support them.

Cuts to those programs have been offered, repeatedly, by the president, to Republicans. Republicans, thus far, have pretended not to notice, because their parallel news media misinforms them and because they incorrectly believe the president to be insincere in his desire to hack away at those very popular and successful programs. The recent Obama charm offensive is designed to convince Republicans that he is very sincere in his efforts to get a Serious Debt Deal, involving "entitlement" cuts and tax reform.

Here's a fun secret: Tax reform (in this case referring to eliminating or scaling back "tax expenditures") is technically a conservative policy priority, even if elected Republicans refuse to ever support it for real. This is a compromise in which conservative policy is being offered in exchange for conservative support for a conservative policy. The sequester and Obama's Bargain quest mean that Republicans can choose between allowing a Democrat to "take credit" for cutting the two most popular programs in the country or they can just live with the already-passed government spending cut that they are also able to blame on the president. Because the party's "brand" is effectively beyond tarnishing, and because they are still guaranteed control of the House and veto power in the Senate for the foreseeable future, their bargaining position is actually much stronger than even they seem to realize.

But bless the Republicans for being totally insincere in their deficit hysteria. If they actually did care, as opposed to using it as a bizarre excuse for opposing all tax increases, we'd have had a crappy long-term debt deal by now, in the middle of our pitiful "economic recovery."

There's absolutely no point in dealing with the long-term debt now, right now, right this second. The best argument for a long-term debt deal in the midst of an economic recovery that has been comically "sluggish" for years now is that lots of people think "the markets" will make everyone rich once they are "confident" that America is getting its crazy spending "under control." That argument seems to me to rest on many more questionable assumptions than the argument that we should be cheaply borrowing a lot of money now and spending all of that money on giving people jobs. Maybe we can borrow a bunch of money to give to people and also pass a bill that says "we promise to get serious about the debt in a few years, when people have jobs again," to make the markets more comfortable. We could call this Baby Grand Bargain "The Bimpson-Soles Plan," for extra market confidence. (Also we don't actually need to pay down the debt, but whatever. People just think "debt=bad" the same way they thought the Trillion Dollar Platinum Coin was "sillier" than an artificial "debt ceiling.")

Instead, if Barack Obama finally gets his Grand Bargain, we're going to get "entitlement" cuts despite the fact that that is a bad idea that Americans do not want.

There are two important things to remember about "entitlements": They are hugely popular programs for a very good reason, and actual sensible "reform" would mean improving them, not sacrificing them at the altar of "fiscal responsibility." A "grand bargain" that was done with the intention of creating the best possible outcome for the most Americans, instead of with the intention of purposefully doing unpopular things because doing unpopular things denotes "seriousness," would lower the Medicare eligibility age and expand Social Security. That the opposite approach is effectively the bipartisan consensus approach is the special sort of Beltway madness that makes sensible people wish for either a proper parliamentary system or at the very least for an EMP to take out Georgetown and much of Washington's surrounding suburbs.

Medicare is very expensive. It's the "entitlement" that is actually pretty much responsible for those scary "debt will be 10 million percent of GDP by the time the rapidly rising seas have swallowed much of the Earth" graphs. Medicare is expensive because we spend a lot on healthcare. We spend a lot on healthcare basically just because we want to, and doing so has been very good to a lot of people who work in healthcare fields. The way nearly every other advanced nation controls healthcare costs is by just having the government set prices. I thought everyone knew Medicare was cheaper than private insurance because it could negotiate lower rates, but apparently lots of people didn't understand this until Steven Brill wrote a big article about it in Time. Again, many people understand that "reining in healthcare costs" means just spend less on healthcare, but for some reason Washington is fixated on passing the existing ballooning costs onto old and working people instead of just agreeing to pay doctors less in general. (If you feel bad for the doctors we can make their educations cheap/free.)

So basically to save a bunch of healthcare money we should just set rates or expand Medicare. If we are very dedicated to "reforming" Medicare, it would be both smarter and fairer to to lower the eligibility age (ideally to "birth"), and allow it to bargain with pharmaceutical companies the same way it bargains with hospitals, than it would be to make the Medicare pool older, and hence sicker and more likely to "use" a lot of healthcare, by raising the eligibility age. Naturally, the Obama/Democratic/Centrist position is to raise the eligibility age. (The Republican position is "don't touch it for current old people and then just eliminate it completely in a few years.")

Social Security, meanwhile, is lumped in with Medicare not because it faces rapidly ballooning costs in the future -- it doesn't -- but because a lot of people just really, really, really want to cut it, or make it less generous, or let the finance industry get its hands on the money. Social Security would seriously be "fixed" just by a) raising taxes and/or b) deciding to pay for it, with borrowing or with some other pot of money. As Duncan Black has been attempting to argue, making Social Security less generous is a horrible idea, because tons and tons of Americans just don't have enough money to retire on. There aren't pensions anymore, and pensions apparently were not a sustainable retirement-funding mechanism. 401Ks aren't cutting it and having a bunch of "money" in the form of a house is not actually that useful.

We should, in other words, be having a big national debate about how to expand Social Security, not find ways to make it less generous for future retirees. (Maybe let's make our country seem like a nice livable place and get a bunch of immigrants here to expand our population and contribute to the economy and pay taxes and stuff?) Otherwise instead of a Social Security funding crisis we will have a "no one has enough money to retire" crisis, in a few years. Which will likely require expensive government intervention anyway. Instead, the Obama/Democratic/Centrist position is "chained CPI," which reduces benefits. (The Republican position is "let's wait a while and try to privatize it again later, maybe.")

In a country with a political system that was actually responsible and responsive to public preferences, the "grand bargain" following the resounding victory of the more liberal party in national elections would be the expansion of the welfare state and the social safety net. Instead, we have two austerity parties arguing over the rate at which they'll impoverish the future elderly.

We'll just have to count on the wingnuts in the House GOP to blow the whole deal up again, like they usually do.