Never mind what you heard about massive new cuts to the defense industry. Here's how contractors avoided calamity 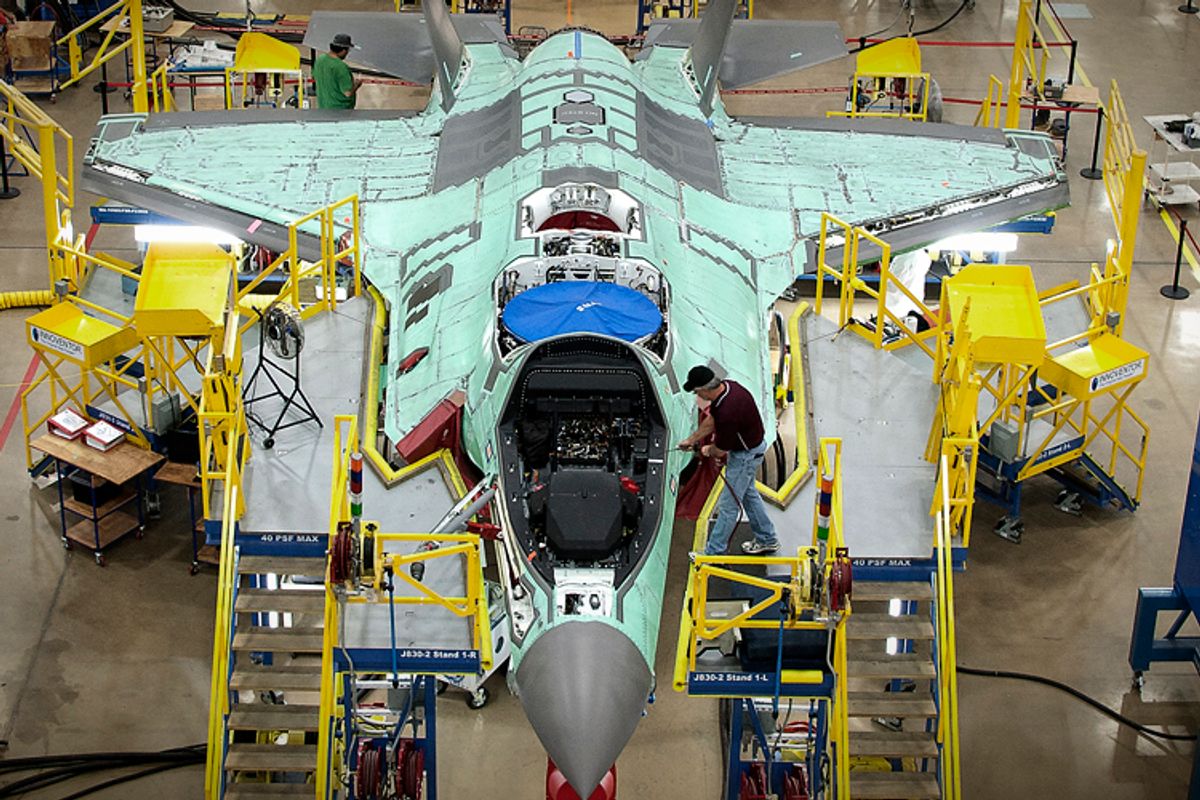 If you believe the hype, sequestration is going to deal a catastrophic blow to the politically powerful defense industry.

It's a “doomsday mechanism,” former Secretary of Defense Leon Panetta declared. The Aerospace Industries Association (AIA) – the leading advocacy group for Pentagon contractors – has also warned of the allegedly dire consequences of sequestration for their industry (which receives nearly $1 billion a day from the Pentagon), expressing “extreme disappointment that sequestration was not averted.”

The political implications for the contractor lobby are just as calamitous, we’re told. Roll Call’s Eliza Newlin Carney says the enactment of sequestration “marks a moment of truth for an industry that has lost clout and allies on Capitol Hill, probably for good.”

And, of course, sequestration's plan to reduce Pentagon spending by $492 billion over the next nine years was the reason Democrats mistakenly believed Republicans would seek to avoid it at all costs.

The truth? We’re watching a political magic trick. Right now, we're at the part of the show where it appears Congress and the President sawed through Pentagon contractors. They're moaning and complaining – giving the audience a good show – but fear not, contracts will be just fine.

This is largely because of the rock solid foundation the industry is standing on. Every year for the last five years the Pentagon has doled out at least $360 billion to contractors. In fact, every year since the war in Afghanistan began contractors have received more than half of the Pentagon’s total budget. In other words, contractors have received more taxpayer money than the Department of Defense’s civilian employees and nearly 1.4 million active duty military personnel combined.

All that money has really added up. So much so that Pentagon contractors are sitting on a backlog of contracts worth nearly as much as the entirety of Pentagon sequestration.

In other words, even if contractors absorbed all of the Pentagon sequestration cuts, they’d still be on track to receive more than $300 billion a year in new contracts, which is more than double what any other country in the world spends on its military.

Does any of this sound catastrophic?

We, the naïve audience of taxpayers (who are, of course, paying for this whole show), are supposed to believe the victim has been eviscerated. Once we pull the curtain back, however, we’ll see the truth behind the trick: contractors may have been a target of sequestration, but they’re still winning the war for the Pentagon’s budget.

To be clear, the contractor lobby didn’t take the hit from sequestration on March 1, but on August 2, 2011 when the Budget Control Act of 2011 was enacted and included cuts to Pentagon spending as a punishment for Congressional inaction. Unfortunately for the contractor lobby, inertia is the norm for a Congress that hasn’t passed an actual budget in nearly four years. For many policymakers sequestration became the best, worst option. Most Members of Congress got at least something they wanted by doing what Congress does best – nothing.

But, even with the enactment of sequestration, contractors can rest assured of their preeminent role in the Pentagon’s budget. They’re being protected as much as possible from all sides – the Secretary of Defense, Hawks on the Hill, the Department of Defense Comptroller, and the White House.

Secretary of Defense Chuck Hagel said during his confirmation hearing, “The continuing health of the industrial base will be a high priority for me.”

And despite sequestration, hawks are far from an endangered species on Capitol Hill. John McCain (R-AZ), for example, remained an especially ardent opponent of Pentagon cuts, arguing that it would “significantly impact our industrial capabilities.”

Then there's Pentagon Comptroller Robert Hale, who said in a sequestration briefing on February 20, “I don’t anticipate that we will cancel many, if any, contracts…And, I would like to say to reassure them [contractors], if you’ve got a contract with us, we’re going to pay you."

But to truly understand the situation, consider that the White House recently issued sequestration guidance which allows agencies to award new contracts for “high-priority initiatives.” Given that, among other boondoggles, the Pentagon recently spent taxpayer money on an app that lets you know when it’s time for a coffee break (how would you possibly know otherwise?) and $1.5 million to develop its own brand of beef jerky (99 cents Slim-Jim’s just weren’t cutting it), the bar for qualifying as a “high priority initiative” may be pretty low.

In short, existing contracts aren’t likely to be cancelled, and new contracts are only a “high priority initiative” rubber stamp away.

Sequestration will reduce the amount of money flowing to the industry. But, even though the Pentagon pie will be smaller, all signs point to contractors still getting most of it.

While contractors aren’t disappearing en masse in this magic trick, the same can’t be said of the Defense Department’s civilian employees, who are facing the economic impact of sequestration head-on.

Hale announced that the Pentagon will furlough most of its civilian workforce – nearly 800,000 employees – beginning in April. This includes approximately 15,000 military school teachers and staff. Employees are expected to be furloughed one day per week, without pay, for the remainder of the fiscal year.

The Defense Department is, by far, the largest employer of government workers, so there’s likely plenty of waste in this bloated bureaucracy. But, cutting civilian workers without taking meaningful steps to reduce the Pentagon’s over-reliance on contractors may ultimately cost taxpayers far more than it saves.

Furloughing civilians may create work vacuums where the Pentagon has no choice but to hire contractors to complete essential tasks. From a taxpayer’s perspective, this might not be problematic if they both cost the same amount, but they don’t.

An analysis by my colleague, Scott Amey, of the Project On Government Oversight has found that service contractors employed by the Pentagon cost between two and eight times as much as civilian employees, on average.

Service contractors are not always the most expensive personnel option, and may sometimes be a better option even when they are. But, when the Pentagon spends more on contractors every year than it does on either the troops or its civilian employees, and appears primed to keep protecting contractors even under sequestration, taxpayers have a right to know why.

Why Spare the Big Contractors?

While there is certainly a jobs argument to be made for protecting contractors, economic analyses have found that Pentagon spending is among the least effective means the government has to create jobs, and in recent years the big Pentagon contractors have been receiving more taxpayer money while employing fewer people.

There’s a more basic explanation for why Pentagon contractors are being protected – money.

According to lobbying data from the Center for Responsive Politics, the defense industry has spent more than $100 million on lobbying every year since 2005.

The industry also doled out more than $26 million in campaign contributions during the 2012 election cycle. $16 million of that went to Republicans, and the money went disproportionately to representatives with the greatest sway over the Pentagon’s budget. For example, House Armed Services Committee Chairmen Buck McKeon (R-CA) received $566 thousand from the industry (more than 25% of all his campaign cash in 2012). The industry even went so far as to give nearly $20,000 to McKeon’s wife in her campaign for a seat in the California state legislature.

But, if you’re thinking that it’s just Republican hawks who are on the take from Pentagon contractors, think again.

In 2012 the industry gave more than $10 million to Democrats. President Obama, the Noble Peace Prize recipient, received more than a million dollars in campaign contributions from Pentagon contractors during each of his runs for President. Coincidentally (or not), U.S. overseas arms sales have more than doubled while Obama has been President.

In stark contrast to the lavish contributions coming from Pentagon contractors, the more than two million people employed by each of the service branches and the DoD, combined, made just over $3 million in contributions during the 2012 election cycle, and had nominal expenditures on lobbying.

So, now that sequestration hit and it’s time to make cuts, the choice is easy is for policymakers – don’t bite the hand that feeds.

Sequestration won't upset the military industrial (Congressional) complex that President Eisenhower warned the U.S. about more than 50 years ago. It will only ensure that taxpayers pay for a little less of it.

Dr. Ben Freeman is a National Security Investigator at the Project On Government Oversight, specializing in Department of Defense personnel issues, weapons procurement, and the impact of lobbying by foreign governments on U.S. foreign policy.