"Justified" is too flip about violence, even for this devoted fan 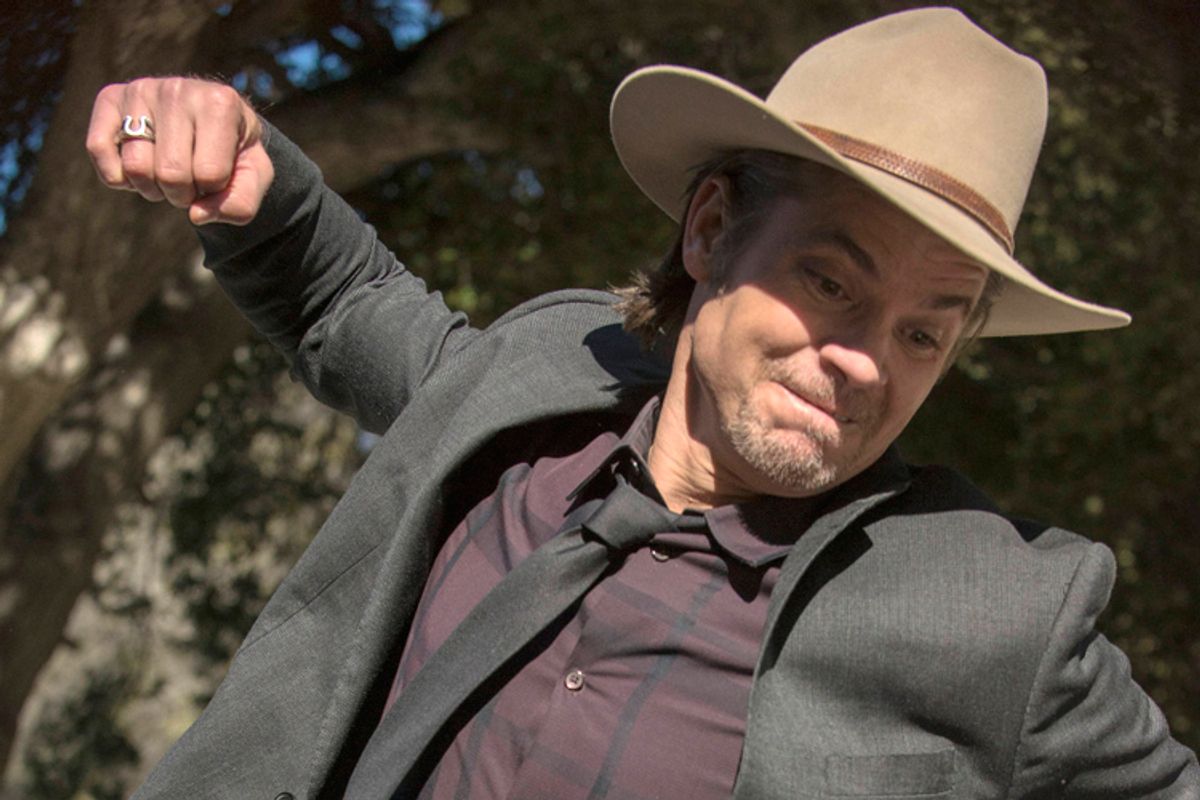 It’s an intense and feverish time for TV violence. Almost all of the best shows have gruesomeness and brutality in their repertoires, resorting to them often (“Breaking Bad,” “Game of Thrones,” “The Americans”) or just occasionally (Lane Pryce hanging from a door on “Mad Men”). Other, lesser shows attempt to use violence to prove their bona fides and seriousness of purpose (“Boardwalk Empire,” “Magic City,” “The Following”). Most comfort TV procedurals start with a murder or rape to get the plot going. And perhaps the most impressively, aggressively gross show ever put on television — “The Walking Dead” — is a massive hit. As Time critic James Poniewozik put it in a recent essay on this subject, “TV drama [has] become reflexively brutal.”

It’s in this context that I’ve been mulling over last week’s episode of “Justified,” FX’s thoroughly enjoyable series about handsome, trigger-happy U.S. Marshal Raylan Givens (Timothy Olyphant). Violence has always been a part of this series— Raylan is as likely to shoot a criminal as offer him a stick of gum— and last week this was especially so. There was a bloody, disturbing death-by-scissor; a contract killer popping three strangers; an ex-military policeman turned junkie, shooting his dealer and a witness; and then Raylan killing the aforementioned contract killer on little more than a hunch. (The hunch turned out to be right.) Some of these deaths were gruesome and disturbing (scissors); some had the punchy, meaninglessness of a video game (contract killing); and one was almost just straight comedy (Raylan’s hunch).

I was bothered by how casually “Justified” wracked up a body count, even though I know “Justified's” willingness to do violence in funny and casual ways reflects what’s great and different about the series. “Justified” is probably the least pretentious best drama on TV. It has a sense of humor, in its dialogue and about itself: It’s got jokes and a procedural format and it's currently in the midst of a season-long arc about finding a fugitive who appeared to have died jumping out of a plane three decades ago. It's not the sort of show that often confuses violence for gravitas — if it were, that scissor stabbing of Raylan's impossible, criminal father, Arlo, would have been the climax of the episode, not the opener.

But at the same time, Raylan's way with a gun is part of what makes him such a badass.  Raylan’s propensity for killing is treated by his colleagues — and the audience and the series — as aggravating, infuriating and cool and adorable. His boss gets worked up every time he kills someone else, but only so much: His suspensions never last too long. It’s hard to stay mad at him, no matter what his body count, and no matter the ever-mounting evidence that his ever-mounting body count is evidence of something deeply troubling and dark inside of him. Anyone who has killed as many people as Raylan Givens has does not have normal-size demons. "Justified," admirably, has not gotten cheesy about these demons — some men, like Raylan, don't like to overshare. But that can mean the show, like Raylan, sometimes feels glib: The violence does mean more than Raylan would like us to think it does, but the show often feels like it's taking his word on the matter.

Worrying about all the violence on TV can feel schoolmarmish: Huge swaths of the audience like violence in their TV shows. (Lord knows I too have enjoyed "Justified.") But that's even more reason for good shows to strive to do violence well, meaning with thought, or more thought than half the deaths on last week's "Justified." When minor characters we don't care about are killing minor characters we don't care about in multiple scenes, death has gotten pretty flip. Violence has to signify, somehow, some way. The last thing anyone needs to watch more of is brutality we're numb to before it even begins.