Mayor Bloomberg loses his first public health measure. Why did this one fizzle out? 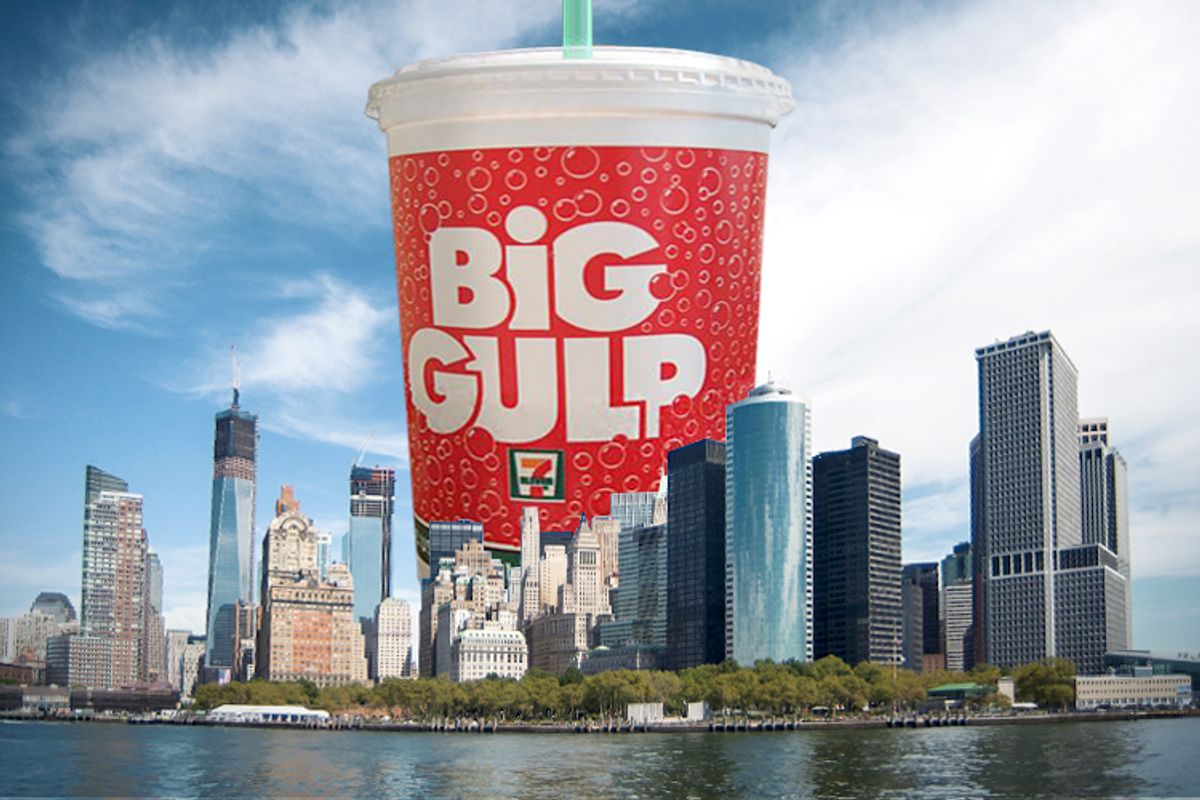 Keep drinking, New York. On Monday, just one day before Mayor Bloomberg's controversial ban on supersize sugary drinks was to go into effect, a state Supreme Court judge struck it down.

You can imagine El Bloombito's disappointment. Mike Bloomberg has had stunning previous successes with his health-focused initiatives — a 2008 ban on trans fats in restaurants paved the way for significant changes in food preparation across the country, and led to a large reduction in the amount of a heart-disease-promoting ingredient in our foods. Two years ago, he restricted smoking in the city's parks, beaches and public spaces – and other cities have either followed suit or are now considering similar measures.

So you can see why our Bruce Wayne-like playboy bajillionaire mayor-for-life got a little cocky about taking on the Big Gulps. The measure, to his mind, wasn't outrageous – a restriction on "any cup or bottle of sweetened drink larger than 16 fluid ounces." It didn't prohibit New Yorkers from buying a jumbo-size milk or juice; it didn't stop them from buying two or three or four sodas at a time. What Bloomberg hoped it would do, instead, would give consumers pause. It would make them face the truth about what a portion size really looks like – and hint, it's not a 624-calorie, 44-ounce Mountain Dew. It was facing a hard truth.

But New Yorkers are not that easily separated from their sodas. We'll stand by and applaud a mayor who's outspoken on gun control and marriage equality, but dammit, if we want to stick a straw in a bucket of Dr. Pepper, you'd best get out of our way, pal. In his ruling, A. Tingling Jr. called the measure "arbitrary and capricious." Critics had argued that it would unfairly target the city's poor, who are likelier to be obese and to consume more sugary drinks. But Bloomberg argued that aiming at the poor and obese was the point, saying Monday, "It would be irresponsible not to try everything we can to save lives."

The problem with his plan, however, was that as the folksy, fuhgeddaboudit "New Yorkers for Beverage Choices" campaign successfully spun it, it seemed aimed directly at the people – the thirsty, thirsty people. You want to take foie gras off menus? Most of us will be OK with that one. Stop cooking fries in trans fats? Yeah, we're not even sure what those are. We still get to have our fries, right? Then who cares? It's the same whenever restrictions on high-fructose corn syrup are bandied about -- it's a part of the product, and that's for the corporations to figure out. But a Pepsi fit for Gargantua? That's something we can hold in our hands. We understand that. And that makes it feel personal. It doesn't look like an attack on corporate irresponsibility; it just looks more like the mayor saying, "You're going to spoil your dinner if you have that. And I will turn this car around if I hear one more word out of you." No wonder mayoral candidate and big beverage aficionado Christine Quinn appeared on Piers Morgan's show Monday triumphantly hoisting a drink roughly the size of the Stanley Cup.

Bloomberg, for all his administrative mishegoss, had his high-functioning heart in the right place with this one. But he made it look like an imposition into personal choice, and that's something that doesn't float in the land of the free. The mayor vows he'll fight on, and as he does, local venues like the Barclays Center are already experimenting with voluntarily selling smaller "French-size" beverage portions. But in the meantime, it's worth mentioning that our tap water is still delicious, calorie free, available at no charge – and you can drink as much of it as you like.