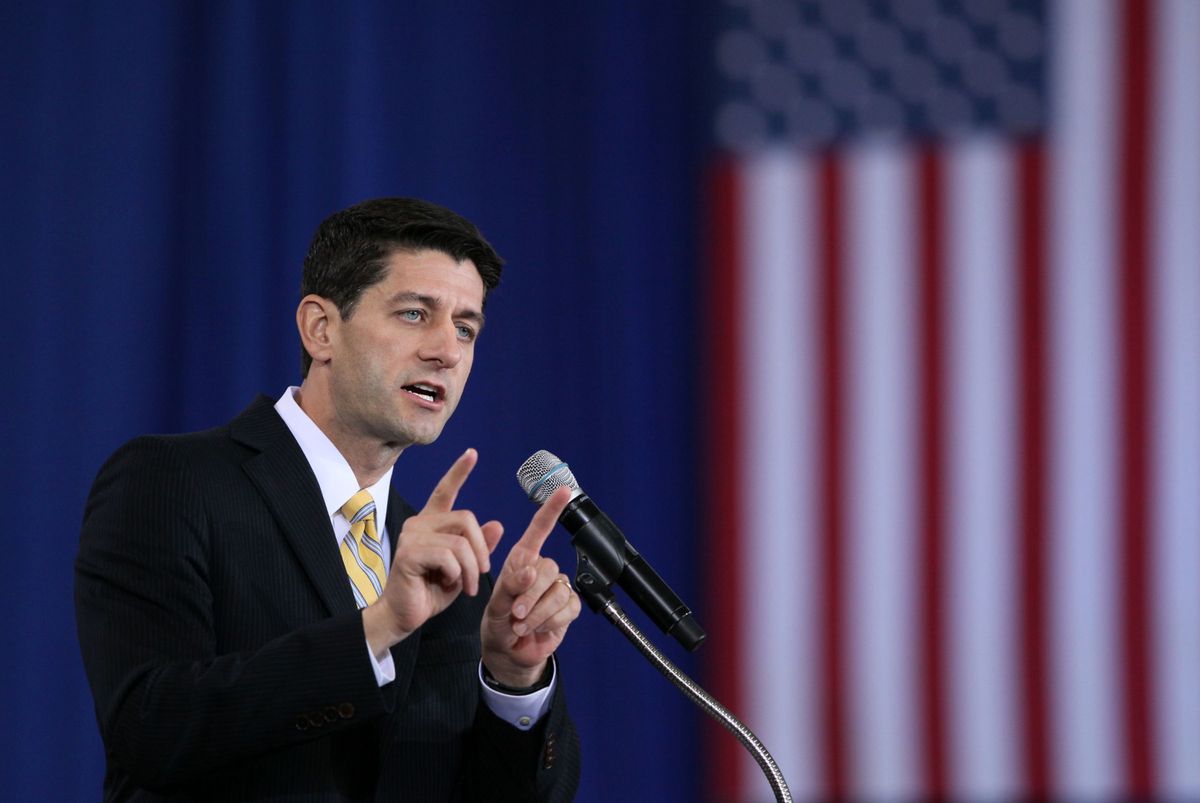 I never want to see another chart about another Paul Ryan budget again. I swear, liberal wonk bloggers now pay exponentially more attention to Paul Ryan's annual budget releases than conservatives of any sort do.

Here's what we already knew about Paul Ryan's budget, before he released it: It would be so vague as to be basically impossible to score, it would involve a massive tax cut for wealthy Americans, it would effectively dismantle Medicare in a few years, and it won't ever become law. So, today brought us I think four hundred charts, illustrating those points, in dozens of blog posts, admittedly mostly by Ezra Klein and his Wonk-Servants but also in just about every other liberal opinion organ with a budget or econ "wonk" on staff. Here is Slate's Matt Yglesias explaining that Ryan's plan to balance the budget is "lower taxes on the rich, higher taxes on the middle class, less program spending for the poor and the working class." That was also his plan last year, and the year before!

I know I literally just said that repetition is essential in winning stupid political arguments, so obviously everyone please just continue hammering away at Ryan and his ridiculous regressive fantasy budgets, but I think it's worth noting what the non-liberal liberal media was paying attention to today.

CNN spent the day talking about the pope. Joe Scarborough and his chums seemed more interested in the soda ban. Politico was still fixated on Obama's "charm offensive." The Senate Democratic budget actually got more play. Hell, the National Review Online devoted more digital ink to the pope election today than to Paul Ryan and his 10-year plan. I think the apex of mainstream Beltway press attention was when Luke Russert live-tweeted his own reading of the budget for like a half-hour.

I think -- and let's all hope I'm actually right and not just being incredibly hopeful -- this finally confirms that Ryan is "over" as a figure the Beltway press treats with incredible reverence.

Paul Ryan effectively made himself into an explicitly partisan figure by accepting Mitt Romney's offer to be his running mate, and then campaigning in a particularly shameless fashion. Whereas before, Ryan was accepted -- with assistance from figures like Klein -- by the nonpartisan press as a figure of great Seriousness, because he said words like "baseline," his reputation now is basically Eric Cantor With More Graphs. The story with him went from, "at least he's serious about the deficit," to "this guy really wants to cut taxes and roll back Obamacare."

What's fun, of course, is that this nut still represents the official mainstream conservative side in the ongoing Great Deficit Swindle, and the "liberal" side is going to be represented by a very moderate Senate Democratic proposal to cut a mere $1 trillion over the next decade, but at least everyone does now belatedly seem to recognize that Ryan is actually a right-wing ideologue and not a serious problem-solving technocrat.