Do Boy Scouts get a badge for surveying members whether it's OK to be gay?

The BSA is taking baby steps toward revising their views about gays and lesbians. They have a long way to go 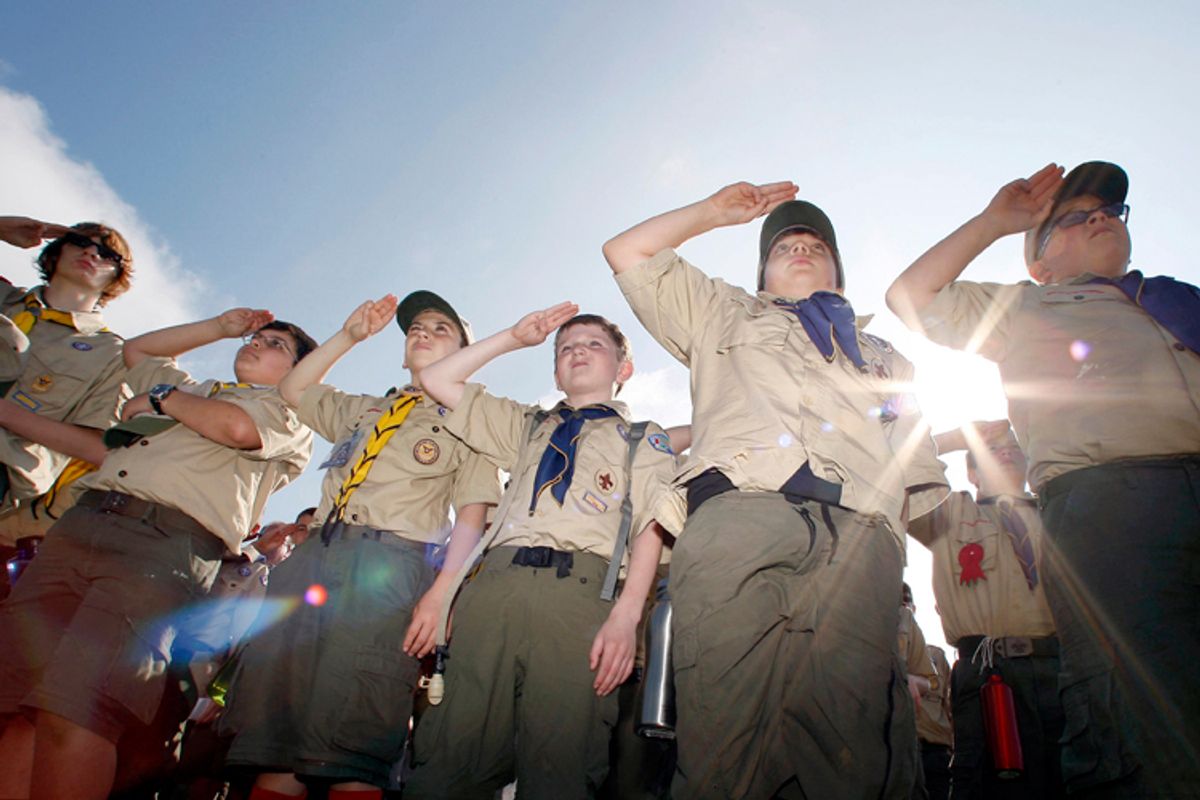 If they handed out badges for progressive thinking, the Boys of Scouts of America would still have a long way to go toward earning itself one. The organization, which has in recent years been fighting back hard for its right to keep "open or avowed homosexuals" out of its ranks, has of late been making noises that would indicate a softening of its stance. In January, the Scouts organization daringly announced it was "potentially discussing" a change in its policy in the wake of public pressure to ease its restrictions. This week, it has further tested the waters, unveiling a survey sent to "1.1 million scouts and their families" across the nation. Scouts spokesman Deron Smith told the New York Times this week that the responses will be presented to the group's leaders in May, and that "no specific weights have been assigned to any particular element, and the report will be reviewed as a whole."

For those who live in a world in which gay and lesbian people move around with relative freedom, holding down jobs and generally not having their whole lives judged on a continuum between "totally acceptable" and "totally unacceptable," the survey is quite an eye-opener. It presents "scenarios that could happen if the Boy Scouts keeps or changes its policy" and asks members to rank how acceptable they are, as well as queries regarding whether "prohibiting open homosexuals… is a core value of scouting." Questions include whether an "openly gay" 15-year-old should be allowed to bunk with a heterosexual boy on a trip, or if a gay adult should be allowed as a co-leader on overnight trips. They ponder whether it's acceptable for the Scouts to deny a qualifying member his Eagle Award if he admits he's gay, or if a mom who is "known to be a lesbian" can become a den mother. Funny they should ask, because last year, the Scouts booted Ohio's Jennifer Tyrrell as her son's den mother because she's gay, and denied teen Ryan Andresen his "unanimously approved" Eagle pin after coming out to his troop leaders during his final Eagle project — on bullying. Last month, a group including Andresen's father and Tyrrell delivered a petition with 1.4 million signatures asking for change to the Boy Scouts organization's national headquarters.

It's a sign of evolution that the Boy Scouts of America is opening itself up enough to even have a conversation with its members about these issues. But it's also an obvious mark of how desperately far the organization still has to go. In 2013, it is flat-out absurd to continue to restrict membership or withhold honors from anybody for being simply who he or she is. The very phrasing it continues to use -- "open homosexual" -- is despicable, with its implication that the problem the Scouts has isn't just with someone being gay, it's with being honest about it. And the question of whether gays should be allowed on overnights is insulting in its tacit assumption that a gay man or teen would automatically be weird or unsafe to be around.

Absolutely zero regarding this issue should have anything to do with the fact that most Boy Scouts troops are linked to churches and faith-based groups. It's about human rights and dignity. And guess what? You can't crowd-source that. You can't take a vote and decide that if enough people filling in their little circles don't mind being around gay and lesbian individuals, then maybe then you won't discriminate against them. It doesn't work like that. Here's how it does: You wake up and realize that it's morally wrong to shun people based on their orientation – and then you stop doing it. Basic respect isn't an answer on a survey. And if you're an organization that's supposed to instill values and leadership, you man up and show the world what it looks like to have both.