Ladies and gentleman, we have a new pope

A plume of white smoke has been spotted above the Vatican, signaling the cardinals have come to a decision 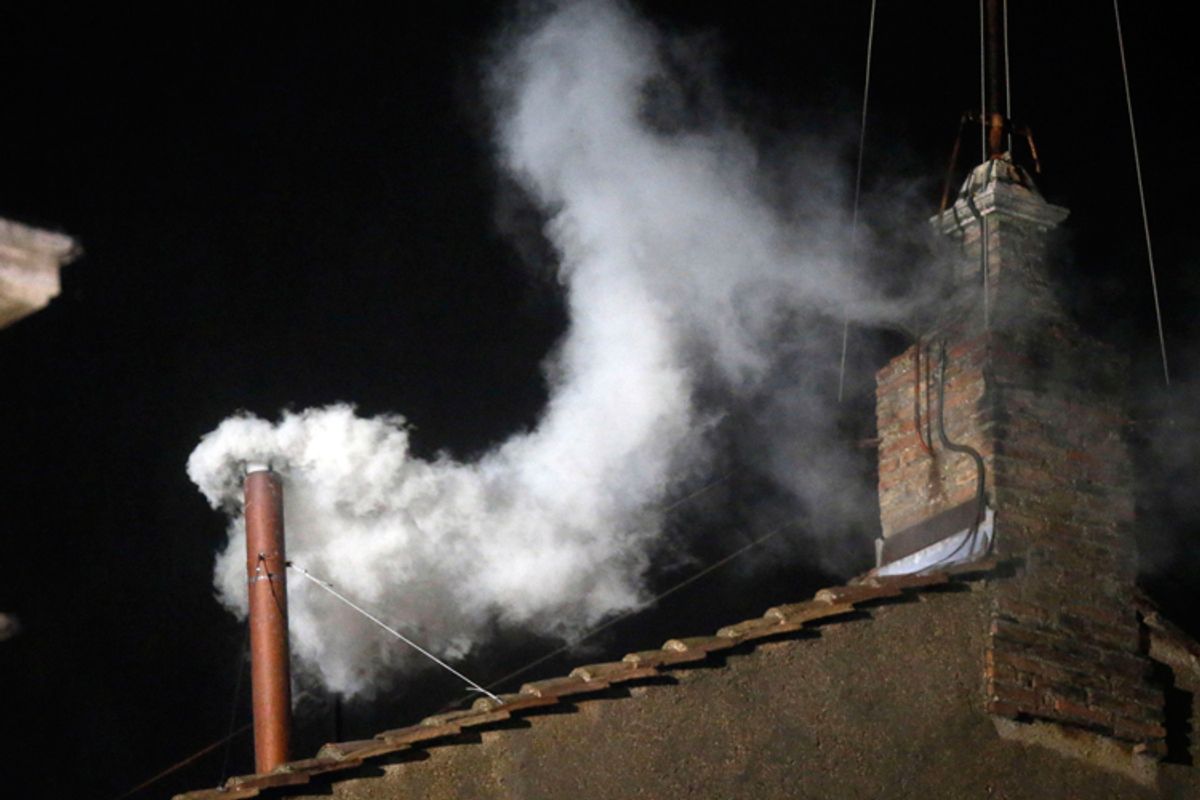 White smoke emerges from the chimney on the roof of the Sistine Chapel, in St. Peter's Square at the Vatican, Wednesday, March 13, 2013. The white smoke indicates that the new pope has been elected. (AP/Gregorio Borgia)
--

Tens of thousands of people who braved cold rain to watch the smokestack atop the Sistine Chapel jumped in joy when white smoke poured out, many shouting "Habemus Papam!" or "We have a pope!" — as the bells of St. Peter's Basilica and churches across Rome tolled, signaling a pontiff had been chosen.

The pope, whose identity isn't yet known, is due to emerge from the loggia overlooking St. Peter's Square to deliver his first words as the Bishop of Rome.

Elected on the fifth ballot, he was chosen in one of the fastest conclaves in years, remarkable given there was no clear front-runner going into the vote and that the church had been in turmoil following the upheaval unleashed by Pope Benedict XVI's surprise resignation.

The conclave played out against the backdrop of the first papal resignation in 600 years and revelations of mismanagement, petty bickering, infighting and corruption in the Holy See bureaucracy. Those revelations, exposed by the leaks of papal documents last year, had divided the College of Cardinals into camps seeking a radical reform of the Holy See's governance and those defending the status quo.

The names mentioned most often as "papabile" — a cardinal who has the stuff of a pope — include Cardinal Angelo Scola, the archbishop of Milan, an intellect in the vein of Benedict but with a more outgoing personality, and Cardinal Marc Ouellet, the Canadian head of the Vatican's important bishops' office who is also scholarly but reserved like Benedict.

Brazilian Cardinal Odilo Scherer is liked by the Vatican bureaucracy but not by all of his countrymen. And Cardinal Peter Erdo of Hungary has the backing of European cardinals who have twice elected him as head of the European bishops' conference.

On the more pastoral side is Cardinal Sean O'Malley of Boston, the favorite of the Italian press, and Cardinal Timothy Dolan, the back-slapping, outgoing archbishop of New York who has admitted himself that his Italian is pretty bad — a drawback for a job that is conducted almost exclusively in the language.