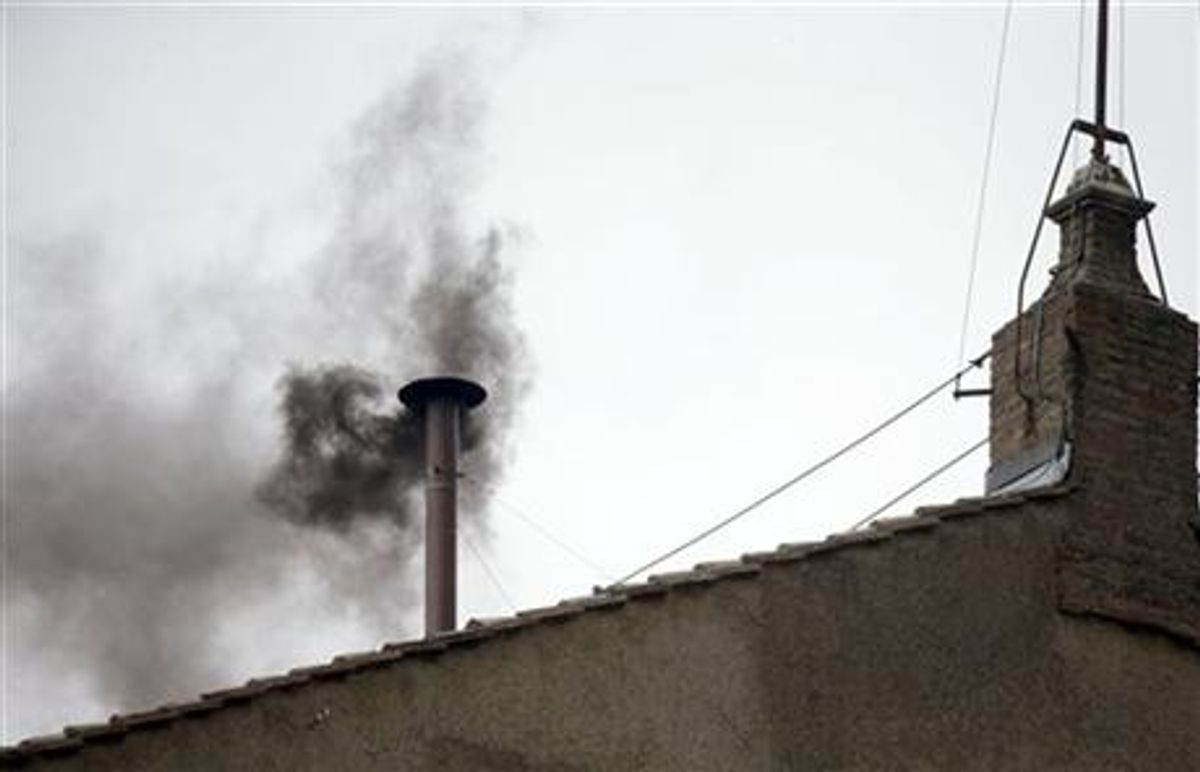 VATICAN CITY (AP) -- Black smoke again billowed from the chimney of the Sistine Chapel on Wednesday, meaning that Catholic cardinals hadn't elected a pope on their second or third rounds of balloting.

Cardinals voted twice Wednesday morning in the Vatican's famed frescoed chapel following their inaugural vote Tuesday to elect a successor to Benedict XVI, who stunned the Catholic world last month by becoming the first pope in 600 years to resign.

The cardinals break for lunch at the Vatican hotel and return for another two rounds of voting Wednesday afternoon.

The drama - with stage sets by Michelangelo and an outcome that is anyone's guess - is playing out against the backdrop of the turmoil unleashed by Benedict's surprise retirement and the exposure of deep divisions among cardinals that ensued. They must find a pope who can both clean up a corrupt Vatican bureaucracy as well as a pastor who can revive Catholicism in a time of growing secularism.

The divisions and the difficulty in finding both attributes in one man, many analysts say, mean that the world should brace for a long conclave - or at least one longer than the four ballots it took to elect Benedict in 2005.

As they did on Tuesday night, thousands of people braved a chilly rain on Wednesday morning to watch the 6-foot- (2-meter-) high copper chimney on the chapel roof for the smoke signals telling them whether a new pope has been elected. Nuns recited the rosary, while children splashed in puddles.

After the smoke poured out, the crowds began to dissipate though a few hangers-on appeared ready to wait out the afternoon balloting.

Unlike the confusion that reigned during the 2005 conclave, the smoke this time around has been clearly black - thanks to special smoke flares akin to those used in soccer matches or protests that were lit in the chapel ovens to make the burned ballots black.

The cardinals spent the night sequestered in the Vatican's Santa Marta hotel, an impersonal modern hotel on the edge of the Vatican gardens. They have no access to television, newspapers, cell phones or computers, and all the hotel staff have taken an oath of secrecy to not reveal anything they see or hear.

The actual vote takes place in far more evocative surroundings: the Sistine Chapel frescoed by Michelangelo in the 16th century with scenes of "Creation" and "The Last Judgment."