Kentucky used to be known for the Derby, UK basketball and bourbon. How did it become the center of U.S. politics? 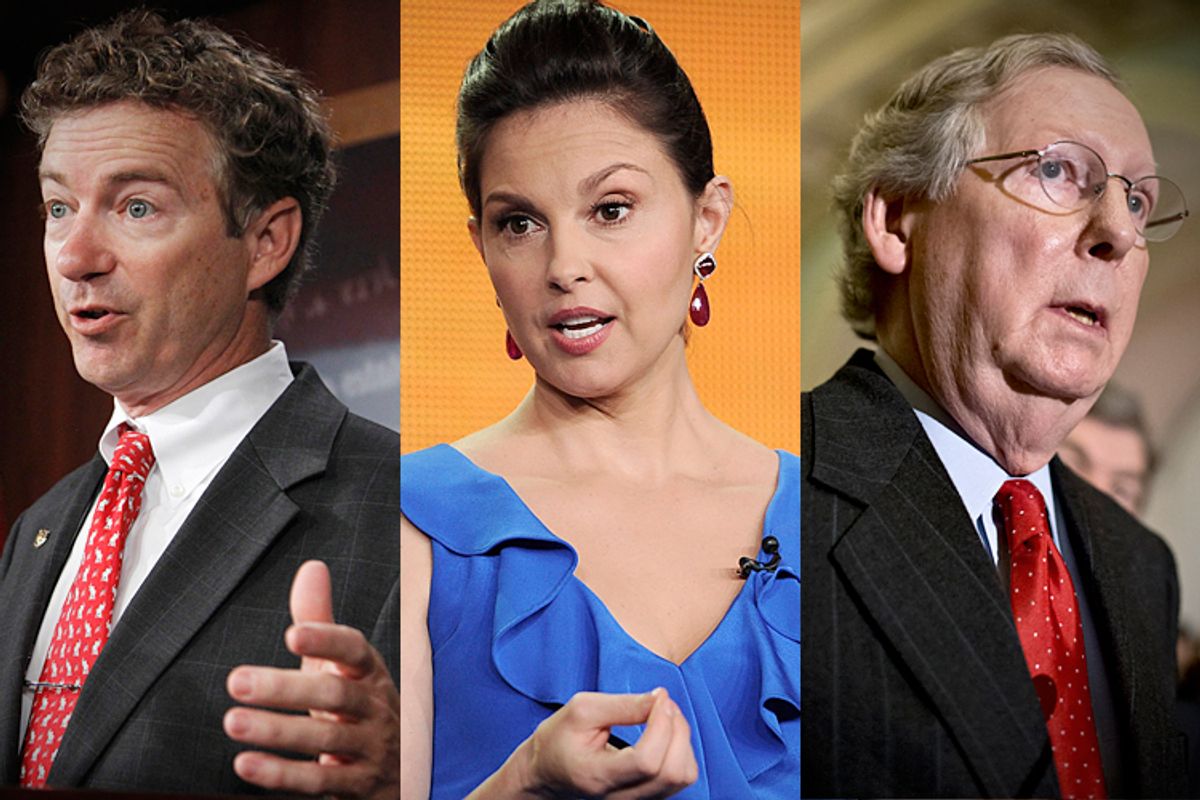 So, all it took for the rest of the country to notice Kentucky politics again was a Senate minority leader, a 13-hour filibuster and an actress-activist preparing for the role of candidate. Just like that, the Bluegrass State has emerged as the home base for some of the most interesting players -- and one of the most-discussed aspiring players – in Washington politics.

Sen. Mitch McConnell, in addition to being a fixture on the Sunday talk show circuit, leads a diverse Senate Republican caucus. Actress Ashley Judd continues to lay the groundwork for a potential run against McConnell in 2014, which has the national and state press abuzz. And the commonwealth’s junior senator, Rand Paul, just made a 13-hour splash on CSPAN-2 with his filibuster last week. And he’s a top contender for the GOP’s presidential nomination in 2016.

But this isn’t the result of some Kentucky machine churning out political superstars. “None of them came up in the traditional way. They didn’t come up through the Legislature. Even McConnell was sort of nobody’s protégé. He just kind of worked his way up,” said Trey Grayson, the former Kentucky secretary of state who is now director of the Harvard Institute of Politics.

Oddly, none of the three was born in Kentucky. McConnell was born in Alabama and moved to Kentucky as an eighth-grader. Paul, of course, grew up in Texas with a congressman for a father and didn’t settle in the Bluegrass State until he met his wife, who was a Kentuckian. And Judd was born in California to her famous mother, Naomi, but did go to middle school in Ashland, Ky., and got a degree from the University of Kentucky.

Politically, each has found a different path, exploiting fortuitous timing and the opportunities that a smaller state offers.

McConnell went from being a local official in Louisville to a U.S. Senate candidate in 1984. And he won largely because of a combination of Ronald Reagan’s coattails and a shrewd ad campaign featuring a hound dog searching for Democratic Sen. Dee Huddleston. That commercial underscored McConnell’s criticism that the incumbent put speaking events ahead of his Senate votes. The ad still lives on YouTube.

From there, McConnell methodically built his credentials to become the first Kentuckian since Alben Barkley in 1949 to lead his party in the Senate.

Paul took a much different path to political stardom.

Aside from a stint as a citizen lobbyist, he wasn’t a player in Kentucky’s political scene before announcing for the Senate to replace the irascible Sen. Jim Bunning. But Paul harnessed Tea Party enthusiasm that was cresting that year and the national network of donors who backed his father’s presidential bid. And without airing a single TV ad, he jumped ahead in the 2010 Republican primary.

“If he runs in a different year, he might not be in the Senate,” said Grayson, who got McConnell’s endorsement late in the 2010 Republican primary and still lost to Paul by 20 points.

And it’s not just timing. Being a smaller state with fewer than 4.4 million people – roughly the size of the San Francisco-Oakland metropolitan area – Kentucky is a relatively inexpensive place to run a campaign. But it still requires a candidate to have some fundraising ability because Kentucky has nine media markets, four of which are based across its borders in neighboring states.

Paul’s besting of Grayson and the subsequent national story lines of Tea Party versus establishment has given rise to multiple sidebars about McConnell and Paul’s relationship and what that says about the future of the Republican Party.

In that sense, Kentucky’s U.S. Senate delegation offers a tantalizing microcosm of the larger intraparty debate.

“There are differing wings inside the party,” said Jesse Benton, who ran Paul’s 2010 campaign and is now the manager of McConnell’s 2014 reelection operation. “I think the fact that they [Paul and McConnell] have a good relationship … is an example of how the Republican Party can come together to win and govern.”

As a way to reinforce that, McConnell made sure to make a brief appearance on the Senate floor last Wednesday while Paul was in the middle of his 13-hour “Randpage” – or demonstration of “Randstanding” depending on one’s views.

And then there’s Judd.

While she’s no longer an A-lister in Hollywood, she would be one in Kentucky with her 100 percent name recognition and pedigree.

Kentucky has elected that type of star before. In 1979, John Y. Brown Jr., the Kentucky Fried Chicken magnate, swept across Kentucky with his bride, former Miss America Phyllis George Brown, and upended the Democratic primary for governor.

While she has spent a lot of time in Tennessee, she wouldn’t be a carpetbagger the way celebrity candidates have been in other states. In addition to having Kentucky roots, Judd has a degree from the University of Kentucky, is a devout UK basketball fan, and has given political, social and environmental speeches in the commonwealth over the past decade – including some that could haunt her politically if she runs.

Judd has clearly fascinated the national media. But that adds yet another dramatic twist.

She has not yet won over key Democrats here. They say they like her as an actress but are wary of her as a candidate who would be on the ballot with many of them in coal country.

As Democratic consultant Jim Cauley put it last month: “The conversation will be about how there’s a big Hollywood star who has said negative things about coal. It’s not going to be about McConnell. And I don’t think that’s the ground we want to play on.”

In fact, around the state Capitol, the “Will she run?” question is a favorite in hallway chatter. But it’s Republican legislators who seem most eager.

“She would be the ideal candidate for us,” one Republican state representative told me Tuesday. He cited her comments against mountaintop removal mining as an example of campaign fodder state House Republicans, who are the minority, can tie around their Democratic opponents' necks in the 2014 election.

Either way, all of this means Kentucky is sure to be a major backdrop for at least the 2014 election cycle and likely the 2016 election when Paul will be in the conversation about the White House or at least running for reelection.

“It does give some pride to the state,” Grayson said. “Outside of Kentucky, people know the Derby, UK basketball and bourbon. We have these iconic brands and industries that kind of belie our economic status.” Add America’s new political cradle to that list.

Ryan Alessi is managing editor of the program “Pure Politics” on the Kentucky network cn|2 and its online site, mycn2.com.