Why does anyone listen to Jeffrey Sachs? 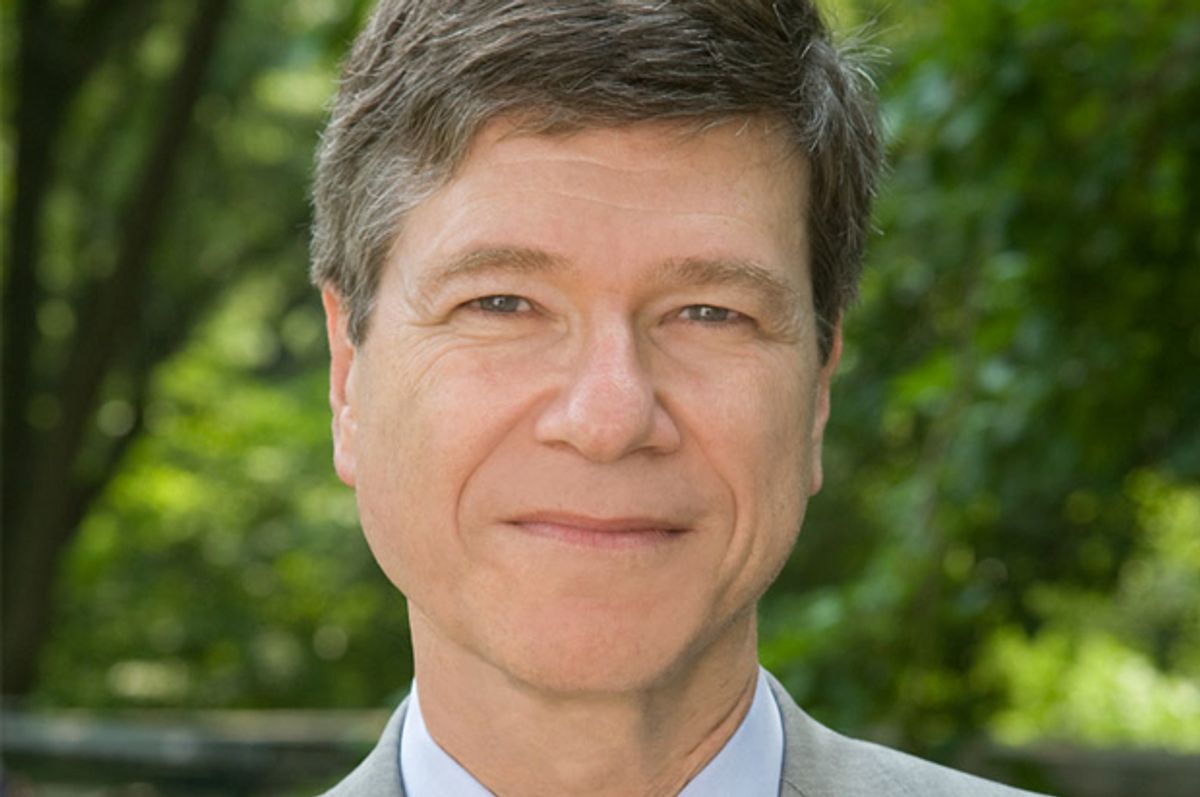 Jeffrey Sachs attacks vulgar crude Keynesianism, arguing that it consists of four simplistic elements. Numerous people are pointing out that those four elements misrepresent the entirety of those calling for more action on jobs. Mark Thoma in particular is sharp here.

I want to do the opposite. When I read people like Sachs, I too notice four crude elements that stand out, all of which are significant problems for a story of what has gone wrong in the Great Recession and what can be done about it. In short, there's (a) no theory of the business cycle and the Great Recession, (b) an odd attack on automatic stabilizers, (c) leaping at any evidence of so-called "structural" unemployment, and (d) a curious absence of full employment as a progressive policy goal.

Even the crudest caricature of Keynesians is nuanced compared to what Sachs is putting forward here when it comes to a theory of the business cycle.

Sachs calls out crude Keynesianism for being simplistic and reductive about the Great Recession. This ignores the large debates currently happening within Keynesian circles. How much of our problem is a “balance-sheet” issue? Is the Fed in check, and if not, is it better to act through active purchases or forward guidance language? (Sachs thinks QE is just a "gimmick.") This is crucial because predictions about interest rates and the argument about debt are tied to these discussions.

But as best as I can tell, Sachs appears to believe that this recession is the punishment our country must endure for not listening enough to Jeffrey Sachs. Sachs's position might best be defined as "progressive Mellonite." Mellonite liquidationists are people who think that the work of a recession is purging all the badness and rottenness from the system. Progressive Mellonites, like Sachs, argue the mirror-image of this. We invaded Iraq instead of building green energy; we securitized mortgages instead of investing in education; now we must all suffer until we go back and do right by a progressive set of priorities.

These problems existed before, but they can’t explain the collapse in GDP. The closest he gets to the actual evidence about the Great Recession is writing that the financial crisis is to blame for part of it and that it was solved through the bailouts. As Ryan Cooper notes, inflation expectations crashed during this time. Indeed, the recession started in December 2007, almost a year before the financial crisis. But this theory is needed to make sense of his proposal.

It is crucial to understand that Sachs isn’t arguing for a “pivot” from direct stimulus and job creation to “winning the future” through a variety of education reforms and long-term investments. If he was, well, then he’d be arguing for the stated position of the Obama administration as of early 2011 -- one that has infuriated progressive economists ever since.

I read Sachs as saying that long-term investments would have been smarter as stimulus than the "timely, targeted, and temporary" elements of tax cuts that comprised a lot of the stimulus. Fine, sure, I agree. The stimulus did a lot of that, as the book The New New Deal argues.

But I also read him as being against the significant increased spending on automatic stabilization and preferring that we had done nothing rather than do that. Take things like extended unemployment benefits, the “Making Work Pay” program, or aid to the states. If I read Sachs correctly, we should not have done that, but instead should have done nothing if that money couldn't have been earmarked for energy investments and education programs.

I’m not sure what to make of this idea. Automatic stabilizers already in place were a large reason why the debt increased during the recession. And contra Jeffrey Sachs, Goldman Sachs (I'm assuming no relation) estimated the collapse in private sector financial balance as greater than that of the Great Depression even with the bailouts, and automatic stabilizers stepped in to help maintain demand.

Did Someone Say Structural? Sold!

I'm not sure why Sachs is arguing that in 2009 money should have been spent on job training, or getting more people through higher education, as a way of combating unemployment. Unemployment doubled across all industries, education levels, and occupations. Many people with higher educations are using their human capital as a hedge to get lower-skill jobs. The number of people quitting their jobs has plummeted. Even today, the short-term unemployed have a harder time finding a job than before the recession, while the long-term unemployed are less likely to drop out of the labor force. Wages have been flat for those with jobs.

Not unlike the crude Keynesians who thought the Phillips curve of unemployment versus inflation was a stable relationship, Sachs argues that the Beveridge curve of unemployment versus job vacancies is all we need to know. But the number of job vacancies is endogenous to expectations of the state of the economy! So a shift certainly isn’t sufficient to make the huge lift he wants to make, especially with so many other factors leaning against this argument.

I can see focusing more in 2013 on these issues, but the idea that they were the only concerns in 2009 -- which is the core of Sachs's argument -- demands significantly better support.

Though Sachs identifies his project as progressive, he never mentions full employment as a goal. There are three obvious reasons why progressives would want to make full employment a goal. First, if we are concerned about the well-being of workers, a tighter labor market will have better wage growth and more opportunities for the worst off than a slack one. The idea that Sachs was worried about job training with unemployment at 10 percent is odd. Second is that a tighter labor market will help us take care of supply issues with our labor force. Employers will promote on-the-job training and work harder to increase the productivity of their labor force, while searching more among the long-term unemployed and trying to bring in people outside the labor force. It will make the task of adjusting the labor force to the work of the future, a key goal for Sachs, significantly easier.

Third, and most important, is that the political goals he wants to achieve are easier at full employment. There's good empirical evidence that unemployment destroyed people's interest in combating climate change. And that makes sense -- how are you supposed to care about Southeast Asia's coastline in 2080 if you are worried about whether you can make your rent? The idea that we’d focus on how to tax ourselves to move to new energy sources when unemployment was at 10 percent is a problematic one if we are serious about reorienting our goals toward a more progressive future.