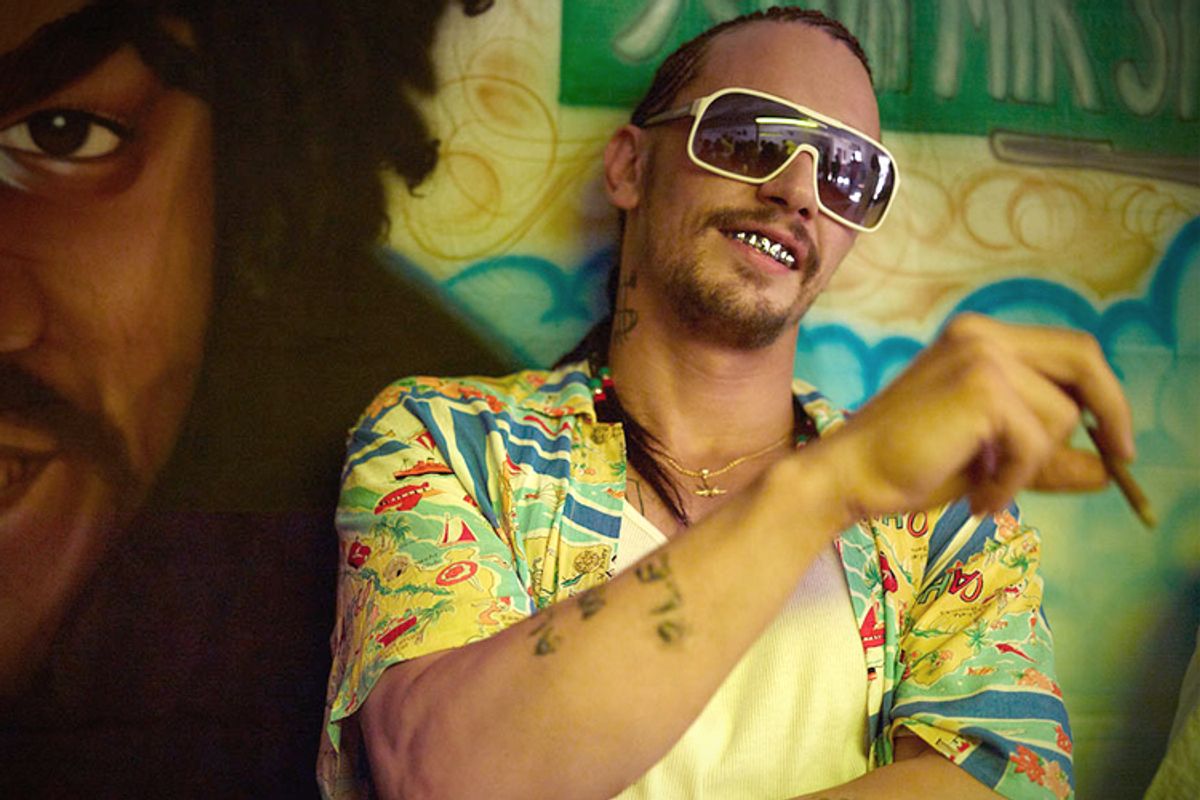 I’m tempted to say that you don’t need to wait until May to see the latest neon-colored screen update of “The Great Gatsby” because here it is, with James Franco playing Gatsby as a self-made Florida gangster-rapper millionaire with cornrows, platinum teeth and ridiculous ghetto fashions. (In this reading, Nick Carraway, the narrator-observer-survivor character in “Gatsby,” is played by a quartet of bikini babes.) In case you think I’m making this up, “Spring Breakers” even features an illuminated dock extending into Tampa Bay that represents the fulfillment of the Franco character’s desires, in this case not a reunion with an old flame but the murder of an old friend.

Where my theory falls apart, perhaps, is on the presumption that “Spring Breakers” writer-director Harmony Korine has actually read “The Great Gatsby,” or is capable of and/or interested in emulating a literary model. Still, Fitzgerald’s influence could have crept in there by osmosis, and whatever other charges you want to level against “Spring Breakers” – such as incoherence, plotlessness, salaciousness and mind-numbing monotony – it has no lack of high concept. It’s partly a softcore “Girls Gone Wild” spring-break special, featuring formerly wholesome teen-oriented stars Selena Gomez, Ashley Benson and Vanessa Hudgens; partly an early-2000s episode of “Cops”; partly a deranged, expressionistic crime fantasy; partly a near-abstract study in Florida beachfront light, shot by ace French cinematographer Benoît Debie; and partly a work of James Franco performance art.

Does all this colorful and ecstatic mess add up to a movie? I mean, tastes vary and all that, but basically the answer is no. There are beautiful things, hilarious things and terrifying things in “Spring Breakers,” and sometimes all three at once. There’s no question that Korine – once the wunderkind screenwriter of Larry Clark’s “Kids” and then the director of much-debated film-festival faves like “Gummo,” “Julien Donkey-Boy” and “Trash Humpers” – is reaching for an unusual art-trash fusion here. There’s a moment of consummation late in the film when I felt he’d gotten there: An idiotic but mystical union of sex and death; the writhing, naked, beer-bonging bodies of spring break on St. Pete Beach as damned souls in an American reworking of Hieronymus Bosch.

Maybe the picturesque, repetitious and largely non-narrative tedium that constitutes most of “Spring Breakers” gets us to that moment, through some kind of hypnosis. And maybe Korine is just throwing ideas and images at the wall to see what sticks, or maybe he keeps repeating shots and snippets of dialogue over and over (and over) again because he and Debie didn’t shoot enough footage to tell a story with any semblance of forward momentum. “Spring Breakers” raises once again the problem found in all of Korine’s movies, but most especially in “Trash Humpers,” which purported to be a found-footage VHS tape documenting the misadventures of back-alley Nashville degenerates. Is making something that is pointless and incoherent as an aesthetic choice somehow superior to doing so because you don’t know better? In practice, is there any difference?

Anyway: So there’s this quartet of bored college girls somewhere in America, played by “Wizards of Waverly Place” star Gomez, “Pretty Little Liars” star Benson, “High School Musical” star Hudgens and Rachel Korine, who is the director’s wife. Confusingly, these young ladies appear to already be in Florida, or not far away, just going by the palm trees and flat, sandy ground of their campus – but maybe that’s a “postmodern utterance,” as the theory-damaged types who are already proclaiming this movie a masterpiece might say. They’re all archetypes rather than characters, and other than Gomez’s religious good girl, Faith – who doesn’t stay in the story all that long – none is readily distinguishable from the others. Which may be the point, I guess, yada yada.

Lacking the scratch to make it to Florida for spring break, the girls stage a vicious diner robbery – urging each other to “pretend it’s a video game” – and then hop a bus for St. Petersburg, where they have a series of highly predictable sex, drug and booze adventures before ending up in jail. Korine filmed these episodes documentary-style amid the banal, anonymous debauchery of a real spring-break week, contrasting the pornographic frat-party atmosphere with the girls’ repeated phone calls home, which are full of assurances that they’re finding themselves and finding kindred spirits in a transformational paradise.

I don’t so much mind Korine making the point that these American everygirls live in such a constricted imaginative universe that their ideas of personal liberation are fundamentally moronic, and that they respond to rapper-hustler Alien (Franco), with his beach house, guns, bling and framed “Scarface” photos, as a manifestation of the American dream. But I do mind the Pounding Hammer of Obviousness heard throughout the film, as with the cracka-chacka sound of a handgun being loaded and cocked, which is used between every single scene. Hedonism comes with a price, and the party lifestyle comes with a dark side. We get it, Harmony! Enough with the hipster after-school special mode.

As for James Franco, he very nearly makes up for his dull and uneasy leading role in “Oz the Great and Powerful” with Alien (real name: Al, “but I’m from another planet, y’all”), a thoroughly offensive and outrageous character who is so ridiculous he’s almost believable. Reportedly based on a real-life Florida rapper named Dangeruss, Alien is like a human embodiment of everything that’s toxic about American pop culture – up to and including those silly shorts that are almost but not quite as long as pants – and as such is also charming and irresistible. I’m not sure which of Franco’s scenes is most disgusting and great: The one where the girls force him to fellate his own guns and he likes it, or the beachfront piano rendition of Britney Spears’ “Everytime,” complete with an interpretive dance number involving pink unicorn ski masks.

But here’s the thing: With all this effusive description, I’m making it sound as if watching “Spring Breakers” is actually an enjoyable experience, when the actual movie – which may involve 25 minutes of actual footage, endlessly reiterated until it reaches feature length – will bore and frustrate a lot more viewers than it delights. I can’t resist quoting an enthusiastic Swedish commentator on IMDB who has described “Spring Breakers” as “radical poetic hyper-cinema” that lies “beyond the postmodern dichotomy of good/bad or high/low,” and as a “hyper-simulacrum that reflects contemporary culture in an extremely complex manner.” Honestly, that’s about 38 percent true. But it doesn't sound super-fun, right? It’s an elaborate way of saying that if you’re too uncool to dig the intentionally trashy and heavy-handed emptiness of this movie, you’re even dumber than its characters.

“Spring Breakers” opens this week at the Regal Union Square in New York and the ArcLight Hollywood in Los Angeles, with wider national release to begin March 22.