The sheriff of Wall Street has its back

SEC nominee Mary Jo White reinforces the idea of one system of justice for corporations, and one for the rest of us 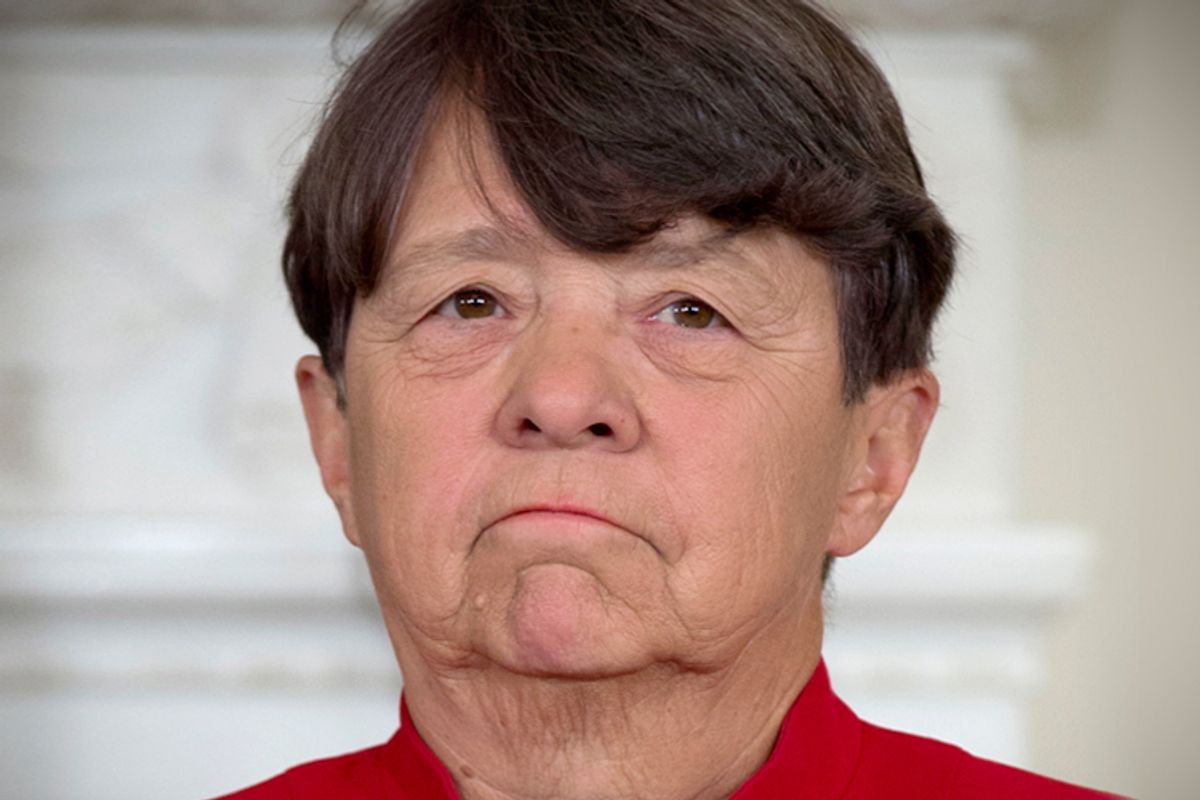 "I am concerned that the size of some of these institutions becomes so large that it does become difficult for us to prosecute them when we are hit with indications that if we do prosecute — if we do bring a criminal charge — it will have a negative impact on the national economy, perhaps even the world economy."

While significant, such comments merely reiterated the same point that Holder's own deputy, Lanny Breuer, made to PBS Frontline. Less noticed, but arguably even more important, were yesterday's two stunning admissions by SEC nominee Mary Jo White (first flagged by Pam Martens), and the utter lack of reaction to them by U.S. senators.

In the first exchange, White admitted that "federal prosecutors are instructed by DOJ [that] they have a long line of factors to consider and one of them is the collateral consequences of a criminal indictment to innocent shareholders, employees, or the public." Unlike Holder, who at least said he was concerned about this radical legal precedent, White insisted that "prosecutors should consider that before proceeding." In making such an assertion, the prospective head of the SEC was endorsing a radical legal precedent, the one that says justice shouldn't necessarily be blind, as the venerated axiom goes. Instead, she was arguing that economic consequences for shareholders should be a factor in deciding whether to prosecute lawbreakers.

White then expanded on this view in her subsequent exchange with Sen. Sherrod Brown, D-Ohio. She defended the SEC for "consider(ing) consequences in their remedies," noting that "a corporate fine that in effect would have grievous impact on innocent shareholders is taken into account" when the SEC decides to fine a lawbreaking company. In other words, no matter how bad the crime may be or how much a punitive penalty may be required to deter future wrongdoing, White is arguing that effects on shareholders still should remain a determinative factor in whether the federal government's law enforcement agencies opt to mete out that necessary punishment.

If that wasn't bad enough, White then dropped the biggest bombshell of the whole hearing: She admitted to vetting her own prosecutorial decisions through White House economic appointees when she served as a U.S. attorney. That's right, she specifically admitted that before deciding to prosecute a financial institution, she contacted Treasury officials Bob Rubin and Larry Summers to find out "whether an indictment of that institution would result in great damage to either the Japanese economy or the world economy."

While White claims Rubin and Summers refused to try to sway her decision, that's not important. What's significant is that in the very prosecutorial job that supposedly gives her the independent bona fides to head the SEC, she purposely vetted prosecutorial decisions through economic officials who are supposed to have no input into such decisions.

That double standard is not only a special preference for corporate executives but for the wealthy in general. After all, prosecutors skewing decisions to protect the economic interests of "shareholders" is not the same as them doing so to protect the economic interests of most Americans. That's because, as Martens notes, "the top 5 percent of the wealthiest Americans constitute the majority of shareholders in the U.S., owning 67.1 percent of all stocks while the bottom 80 percent of the population own 8.3 percent."

Worse, the double standard actually encourages those in the "Too Big to Prosecute" group to keep breaking laws, knowing that they will, at most, be faced with a slap on the wrist. And they are further encouraged knowing that someone like White who adamantly believes in these "Too Big to Prosecute" precedents is heading up the law enforcement agency that is supposed to fight financial crime.

Of course, because of that potential dynamic and because of White's extensive ties to Wall Street (including potentially being paid by a private defense law firm while at the SEC), you might expect a shocked and appalled Senate Banking Committee to halt her nomination. And if the panel didn't halt her nomination, you might at least expect that upon hearing White so openly articulate her "Too Big to Prosecute" views, a few lawmakers would rhetorically raise a few objections to the nomination. But as the Washington Post reports, "not a single senator voiced even slight opposition."

That hard-to-fathom reality is as succinct a summary of how politically powerful Wall Street remains. It shows how both parties are complicit in ongoing financial crimes and in undermining once-sacred concepts of American justice.