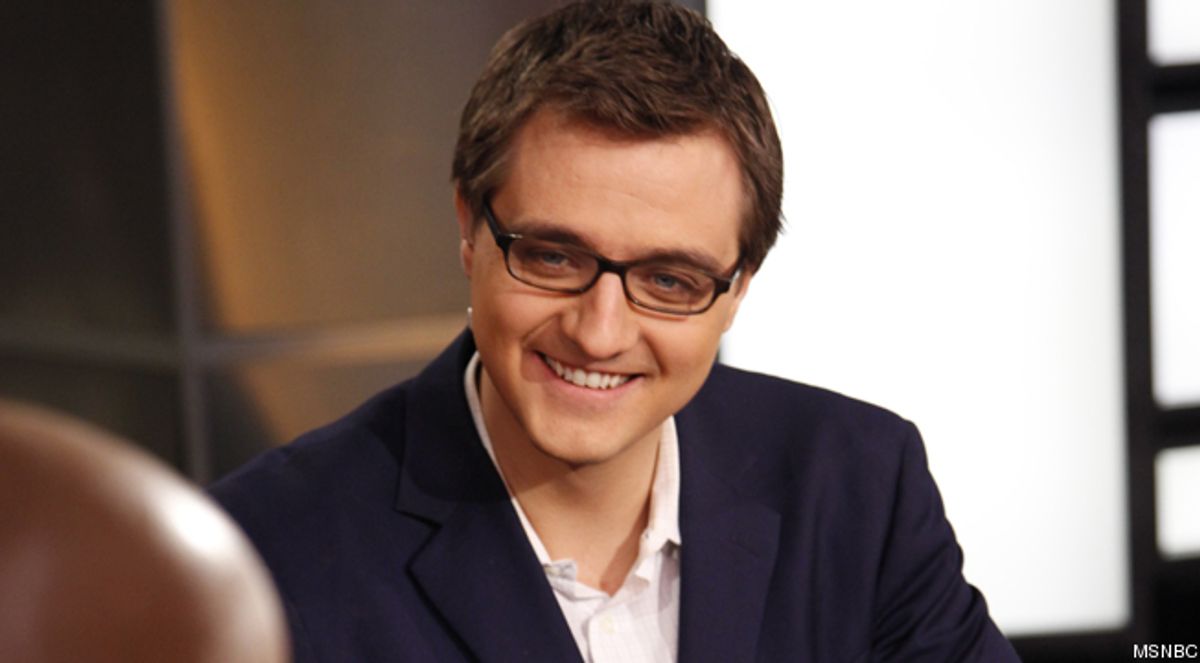 Chris Hayes is ready for his close-up.

The hip, bespectacled journalist is preparing to take over the covetable 8 p.m. time slot vacated by Ed Schultz's "The Ed Show" — network executives have moved Schultz to Saturday and Sunday evenings. Hayes has hosted "Up With Chris Hayes" since September 2011, and established quite a following in less than two years of carrying a show.

"Chris has done an amazing job creating a franchise on weekend morning," network president Phil Griffin said in a statement. "He’s an extraordinary talent and has made a strong connection with our audience. This is an exciting time for MSNBC."

Griffin is banking on Hayes -- and possible Hayes's morning slot replacement Ezra Klein -- to make MSNBC a household name. Well, a liberal household name, at least. “Our awareness level, people who can define who we are, is much lower than Fox and CNN,” Mr. Griffin told the New York Times. The network president has been building out a brand identity through the steady recruitment of ever-younger, ever-more progressive on-air talent. Of the network's gravitation to the left, former President Bill Clinton remarked, “Boy, it really has become our version of Fox.”

And what of Schultz in all of this? While his public comments imply he was a willing participant in the trade -- remarking, "I raised my hand for this assignment for a number of personal and professional reasons" -- the weekend bump is a clear demotion, insiders say. The 8 p.m. slot is the crown jewel of prime time, and while MSNBC has been beefing up its weekend programing, a Saturday slot remains minor leagues in comparison.

There may also be the problem of image: Schultz is part of the Old Left (somewhat literally, as he is one of the older hosts on the network). Populist in tone and heavy on labor politics, Schultz may no longer "fit" with the sleeker, academic and decidedly wonkier tone MSNBC has been cultivating with hosts like Rachel Maddow and Melissa Harris-Perry.

"Up With Chris Hayes" was also one of the network's most diverse weekend programs. As reported by Media Matters, it was "more diverse than any of the Sunday morning talk shows on the other networks, as a Media Matters examination of guests since January 1 demonstrates." The report continued:

Hayes may have gotten a promotion for a job well done, but network executives will be watching closely to see if his brand of smart, un-blustery political commentary can match ratings with Fox's beloved blowhard, Bill O'Reilly.

Whether the ratings gamble will work, though, is anybody's bet.