Francis I: The pope of the 99 percent?

The first Jesuit pope may be deeply conservative on many issues, but his religious order is cause for hope 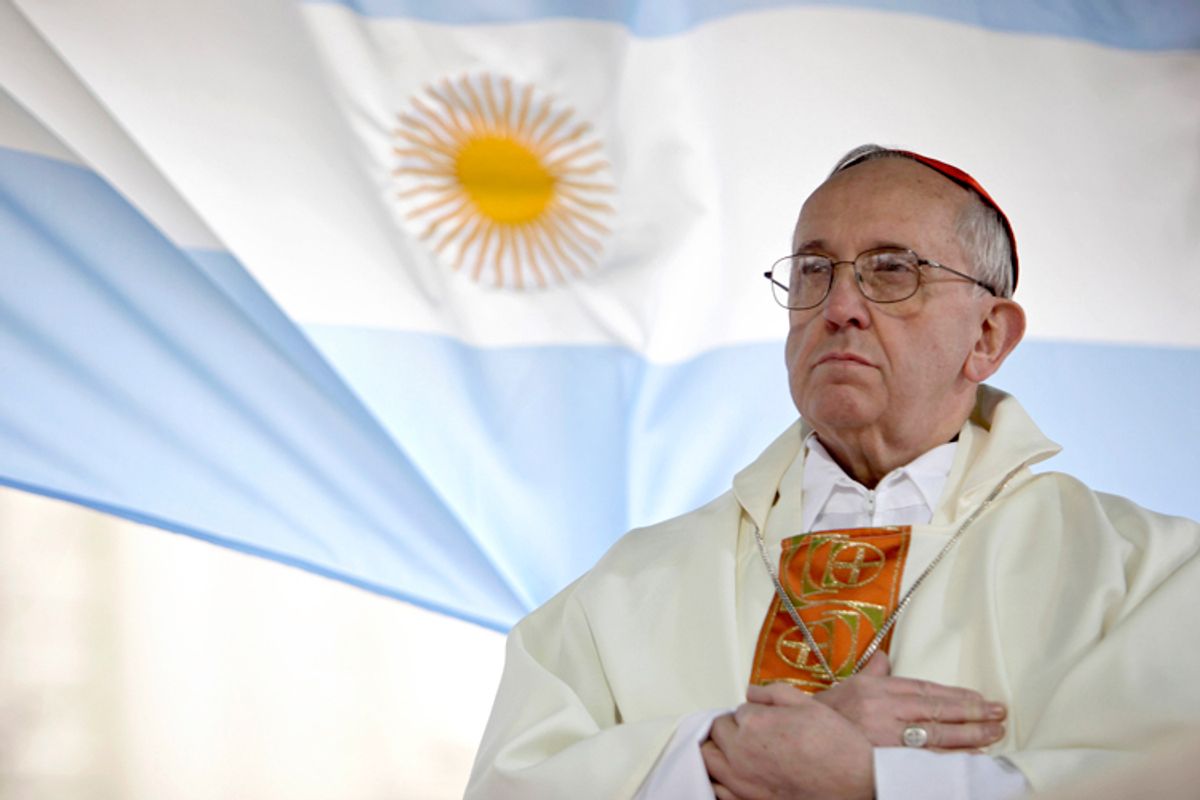 When the puff of white smoke appeared from the Vatican on Wednesday, Catholics all over the world wondered what kind of man would emerge when it cleared. And in these early days of getting to know Jorge Mario Bergoglio, known now as Francis I, it's clear there is already plenty of cause for weary dismay at the cardinals' choice of a staunchly party-line-toeing, conservative old dude. But there's also a small glimmer of hope, and it's not because of the man himself. It's because of the order he represents.

If you'd been holding your breath hoping for a fresh new bro pope, a younger dude with a marginally less offensive attitude toward some of the most deeply controversial and divisive issues among Catholics today, your ship did not come in on Wednesday. The 76-year-old Argentine Bergoglio, the first pope to hail from the Americas, has reportedly called same-sex marriage "a machination of the Father of Lies that seeks to confuse and deceive the children of God." So that'd be a no. He's not down with abortion under any circumstances, which he says contributes to a "culture of death," and has publicly clashed with Argentina's President Cristina Fernández de Kirchner over the country's plan to distribute free birth control. But according to a report in the Guardian, he is, however, open to contraception as a form of preventing disease. And though he's firmly denied it, he's been accused of complicity in a 1976 kidnapping of two priests during the country's military regime.

Yet even as we despair over the prospect of more of the same old, same old from the Catholic Church on issues that deeply affect the lives and basic human dignity of millions of people around the world, there is a glimmer of more hopeful news. Bergoglio is, significantly, the first Jesuit pope. And Jesuits, as everybody knows, are among the coolest of all the Catholic religious orders.

One of the primary foundations of the Jesuits is to serve "the poor and vulnerable" and seek "justice wherever injustice exists." And as John Baldoni wrote in Forbes on Wednesday, the Jesuits have long been the guys who "educated people, took care of the sick, managed businesses, and performed a myriad of other tasks." Jesuits get stuff done. They won't help you out if you're looking for birth control — as Georgetown's Sandra Fluke learned firsthand last year – but they're on the liberal side of many other social issues. Just last month, an editorial in the Jesuit periodical America took a tough stance on guns, noting, "The culture of violence in America has spawned a deadly syllogism: Guns solve problems; we have problems; therefore, we need guns ... Is this really the kind of world we want to live in, a world in which lethal power can be unleashed at any moment at any corner, in any home, in any school?"

The newly poped Francis I chose his papal name from St. Francis of Assisi – a move that CNN Vatican analyst John Allen notes represents "poverty, humility, simplicity." And Bergoglio has already spent a lifetime walking the walk on that front. He blew off living in the archbishop's palace, preferring instead a simple downtown Buenos Aires apartment, cooking his own meals and riding public transportation. In 2009, he criticized his government's "immoral, illegitimate and unjust" economic system, saying, "Rather than preventing that, it seems they have opted for making inequalities even greater. Human rights are not only violated by terrorism, repression or assassination, but also by unfair economic structures that creates huge inequalities." Chew on that, my fellow Catholic Paul Ryan.

He will not be the man who leads the Catholic Church into a new era of openness on the intimate, personal topics of whom we love and how and when we build our families, and that's cause for great disappointment. But in a world in which the divide between the haves and the have-nots just gets bigger and crueler every day, the cardinals may have chosen on Wednesday a man who doesn't give a damn about the fancy rings and fabulous robes that come with the job. A man whose priority might not be scolding nuns for working against poverty and for healthcare reform. What Francis I does with the rest of his life is yet to be written. But at an unprecedented moment in human history, it's possible the college of cardinals have just given us a pontiff unlike any other – a pope of the 99 percent.