So what is a Jesuit, anyway? 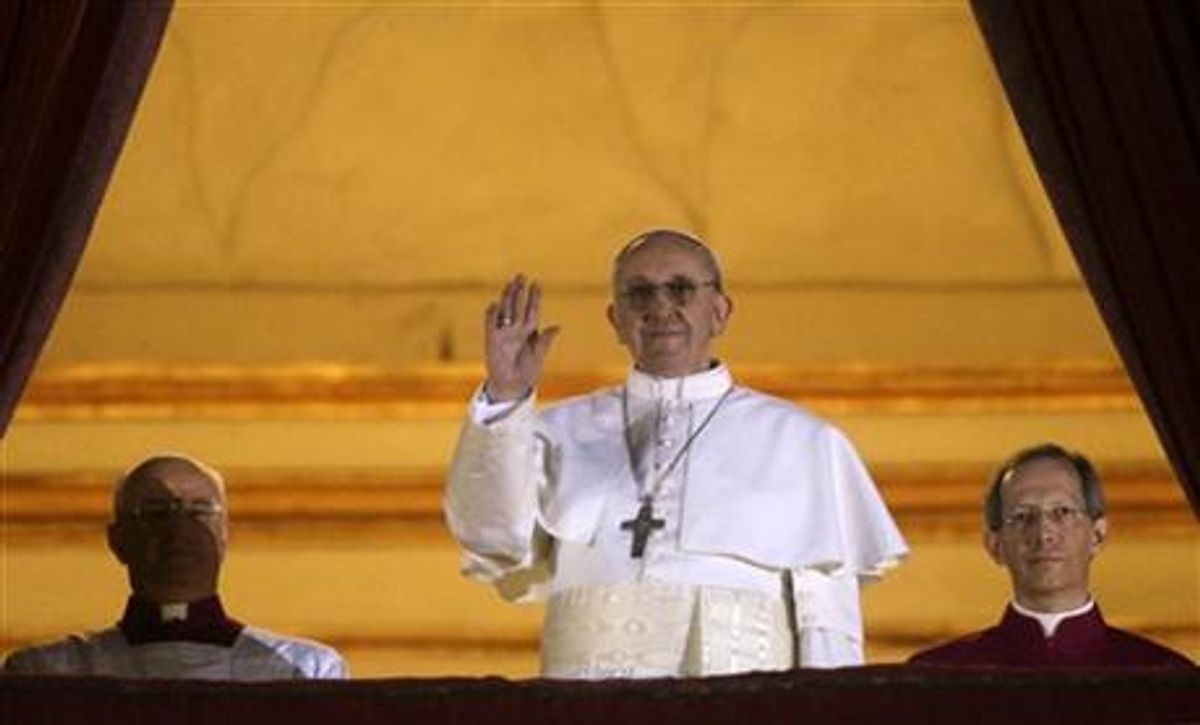 A lot has already been made of Pope Francis' firsts: First non-European pope in a millennia, the only pontiff to come from Latin American, the inaugural "Francis" in papal lineage. He is also the first Jesuit pope.

So what does that mean?

The Society of Jesus

St. Ignatius of Loyola and a small band of followers at the University of Paris founded the Society of Jesus in an effort to reform the Catholic Church in 1534. Rather than break off as a separate church, the Jesuits became a distinct order of priests in 1534 and received commendation from Pope Paul III in 1537. Sometimes called “God’s Marines” or “The Company,” Jesuit priests take vows of poverty and chastity, and pledge obedience to the pope.

Spreading the word, catching some heat

Missionary work is a core Jesuit value, a fact that has sometimes gotten the priests into hot water.

From the beginning, the Jesuits have been aggressively evangelistic; they were the shock troops in the church's resistance to the Protestant Reformation of the 16th century and among the first missionaries to set up shop in such far-flung locales as India, Asia, and Central and South America, the Catholic Encyclopedia records.

That activism earned the society a reputation for political scheming by the 1760s, leading to its official suppression by Pope Clement XIV in 1773. Expulsion of the order quickly followed across much of the Catholic world, from France and Portugal to as far away as the Philippines.

"It thereby contributed to the polarization and politicization of the European public sphere in the age of enlightenment," Christine Vogel, a historian at the University of Rostock in Germany, wrote in a 2010 examination of the suppression.

In 1814, Pope Pius VII restored the Jesuits' church standing, but a Swiss Constitutional ban on the order was not lifted until 1973.

The Jesuits have a major reputation for being the eggheads of the Catholic Church, and currently run more than 100 colleges around the world.

Progressive ties, but maybe not for Pope Francis

According to the Wall Street Journal, the Jesuits' activism has not always gone over well with the Vatican:

Jesuits had a particularly strained relationship with the late Pope John Paul II during the turbulent decades when some in the Church took a leftward turn and Latin America was a front in the Cold War between the U.S. and the Soviet Union...

In places like El Salvador, wracked by bloody civil war, they were seen by the local establishment as the enemy. For instance, six Jesuits, including the rector of the Catholic University of El Salvador, and two house maids were gunned down by Salvadoran troops in one of the worst atrocities of the Salvadoran civil war in 1989.

Earlier in Mexico, Jesuits were expelled from the conservative business capital of Monterrey by the local bishop who thought they were too close to leftist students. In Mexico at the time, the Jesuits who had traditionally educated the sons of Latin America's elite, closed down their leading school in the capital to devote their energies to teaching the poor.

While Francis has already garnered a reputation for austere living and a commitment to the poor, he's also fiercely conservative. As reported by the Washington Post, he is a "critic of socially progressive trends, including gay marriage, representing a continuity of Benedict XVI’s conservative doctrine."

It has also been alleged that then-Cardinal Bergoglio had ties to Argentina's military junta during the country's Dirty War. As reported by The Guardian:

The extent of the church’s complicity in the dark deeds was excellently set out by Horacio Verbitsky, one of Argentina’s most notable journalists, in his book El Silencio (Silence). He recounts how the Argentine navy with the connivance of Cardinal Jorge Bergoglio, now the Jesuit archbishop of Buenos Aires, hid from a visiting delegation of the Inter-American Human Rights Commission the dictatorship’s political prisoners. Bergoglio was hiding them in nothing less than his holiday home in an island called El Silencio in the River Plate.