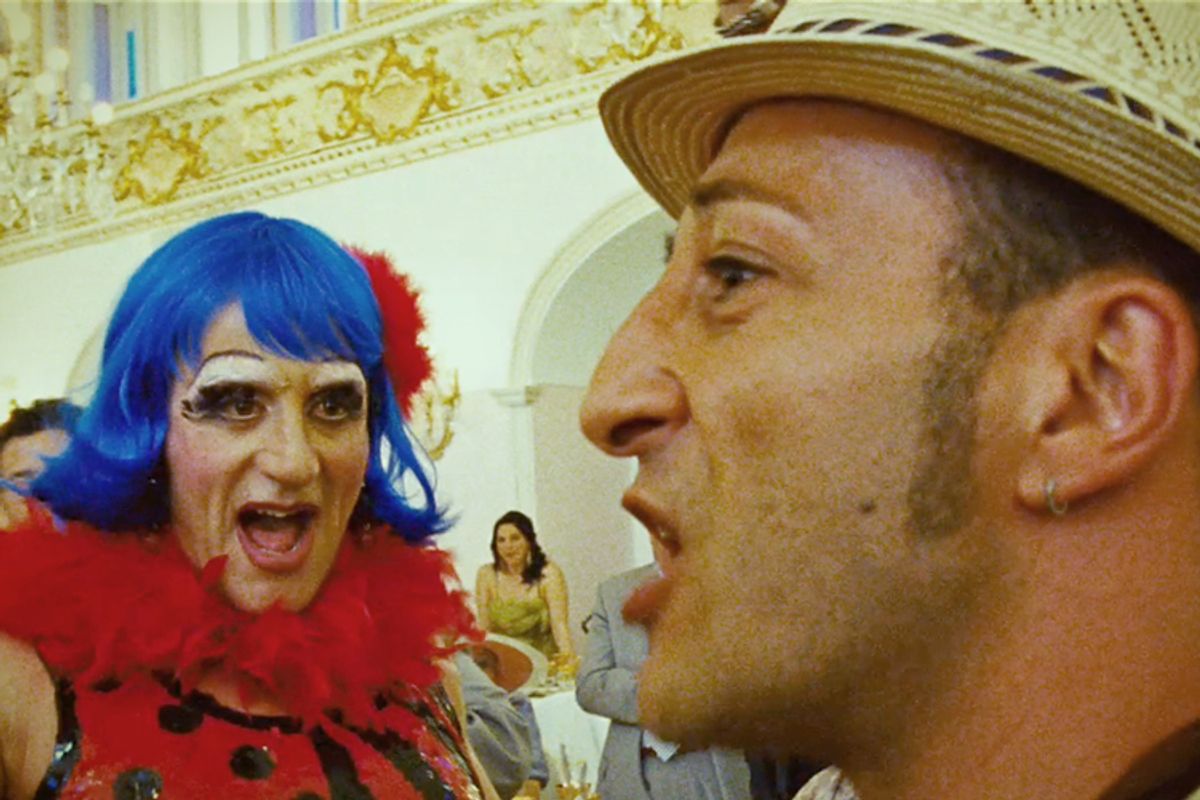 No doubt the recent Italian comedy we should be watching this week is Nanni Moretti’s “Habemus Papam,” released last year, in which Michel Piccoli plays a newly elected pope who suffers a panic attack and refuses to greet the throngs in St. Peter’s Square. So far the reign of Pope Francis lacks that degree of zany melodrama, though he’s got time. But there are plenty of spiritual and cultural lessons to be dug out of Matteo Garrone’s colorful and intriguing “Reality” – the English word is also the Italian title – the farcical fable of a Neapolitan everyman seduced by the lure of celebrity.

If “Reality” isn’t quite as impressive as Garrone’s 2008 “Gomorrah,” an operatic and many-stranded saga about the long tentacles of Naples’ criminal underworld, it makes clear that he’s a filmmaker who can take a familiar story and infuse it with strangeness and vitality. While “Gomorrah” seemed more akin to the big-canvas social and moral criticism of the late Michelangelo Antonioni, “Reality” recalls other models – a little bit Fellini’s “La Dolce Vita,” and a whole bunch Martin Scorsese’s “The King of Comedy.”

Its hero is Luciano (Aniello Arena), a Neapolitan fishmonger, charmer and schemer in classic Italian working-class, amoral-protagonist mode. He lives by his wits, surrounded by an incessant riot of kids and extended family members, both through his seafood stand and a complicated scam whereby poor people order expensive “kitchen robots,” or high-tech food processors, and he “steals” them and resells them on the black market before they’ve even been unwrapped. In real life, Arena is a fascinating story – he’s a convict serving a long sentence for organized crime activities, who was discovered in a prison theater workshop. While authorities let him out by day to shoot with Garrone, he wasn’t allowed to attend the film’s premiere at Cannes last spring.

Unlike Robert De Niro’s Rupert Pupkin in “King of Comedy,” Luciano doesn’t start out obsessed with TV stardom. He’s reasonably well-adjusted and happy being the class clown of his lowlife social circle, at least until his niece (Giuseppina Cervizzi) and his wife (the terrific Loredana Simioli) thrust him into auditions for the Italian edition of “Big Brother,” based on a slight and incidental acquaintance with a previous winner known only as Enzo (Raffaele Ferrante). Italian trash culture is infamously trashier than that of almost any other country – although Russia and Latin America certainly have their great accomplishments in this area – and Garrone’s treatment of the buffoonish and meaningless celebrity of someone like Enzo isn’t even heavy-handed.

As for the idea that the lust for celebrity is a disabling illness, capable of dragging a well-grounded personality like Luciano down the rabbit hole of paranoia and self-regard, that is indeed something of a cliché. But I’d argue that the real story of “Reality” is less a media satire or a critique of reality TV than a tragedy about Italian society’s loss of cohesion and meaning. (Which was also, perhaps, the true subject of “Gomorrah.”) Garrone’s intimate portrayal of Luciano’s everyday life is wry, rich and affectionate; this guy has a wife and kids who adore him, and while his commercial endeavors may not be strictly legal, he’s never hurt anyone and is universally regarded as a good friend.

While I think it’s unlikely that Garrone is arguing in favor of the Catholic Church, “Reality” makes the point that religious faith used to provide a moral anchor for the society, and that watching two bikini-model types pretend to dry-hump in the “Big Brother” house is an inadequate substitute. When Luciano becomes convinced that reality-show producers are watching everything he does to judge his worthiness for stardom, his devout co-worker Michele (Nando Paone) reminds him that Someone Else is watching and judging too. Without quite realizing it, Luciano starts to emulate the lives of the saints: He feeds the hungry, gives away his wife’s imitation designer furniture to the poor and reads random events – customers from Rome, a cricket inside the house – as signs from an unseen power.

These thematic connections are made explicit, maybe too much so, in a sardonic-symbolic, ‘70s-style conclusion that I’m burning to discuss in detail but won’t right now. Let’s leave it this way: While “Reality” is a mixed bag of satire, allegory and melodrama, it’s a rich mixture that an American remake would likely never pull off. This is a movie that will reward multiple viewings, from a filmmaker of tremendous technical ability, humor and heart.

“Reality” opens this week at the Angelika Film Center in New York and March 22 at the Laemmle Royal in Los Angeles. It opens March 29 in Boston and Chicago; April 5 in Philadelphia, Portland, Ore., San Francisco, Seattle and Washington; April 12 in Houston, Phoenix and Austin, Texas; April 19 in Atlanta, Denver, Detroit and Miami; April 26 in Las Vegas and St. Louis; May 3 in Dallas; and May 10 in Salt Lake City and Tucson, Ariz., with more cities and home video to follow.