Almost 10 percent of the U.S. workforce is in the restaurant industry. Why is it legal to treat them so poorly? 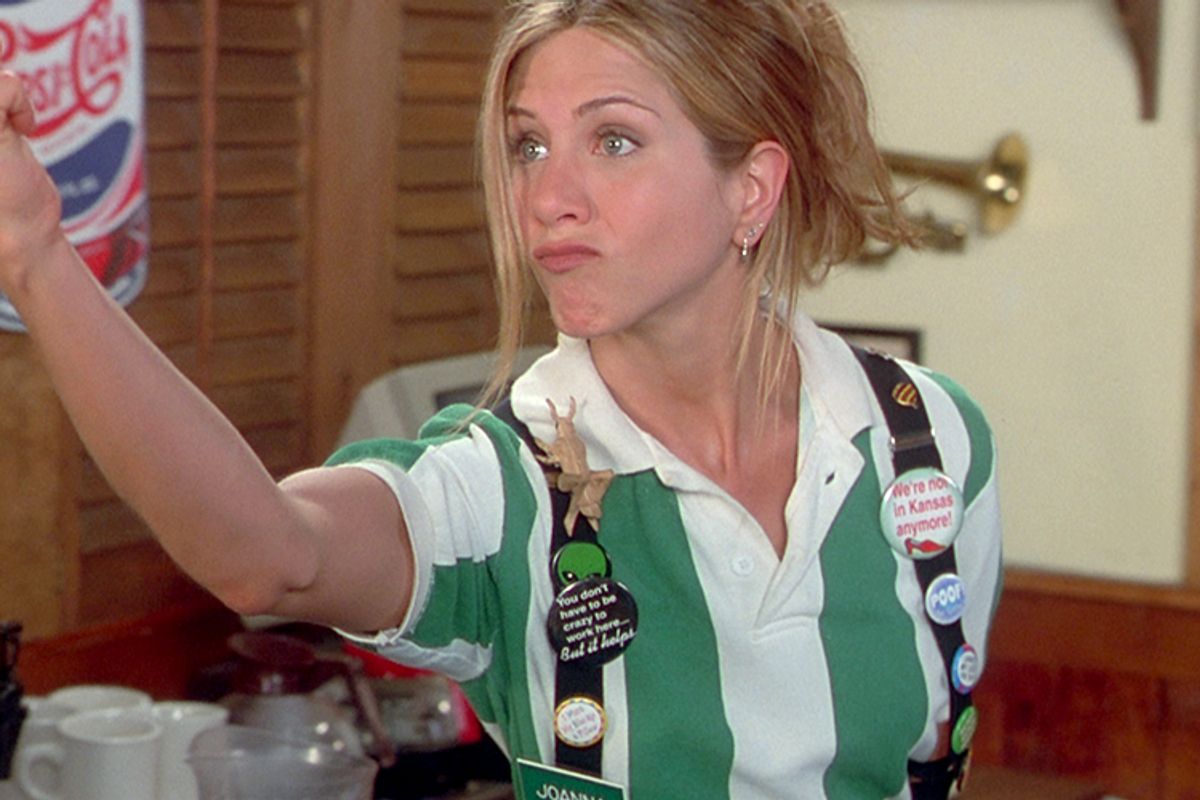 This is the second installment in a new series called Working Ahead, which will examine key issues facing the modern American worker, and how we can use our everyday spending habits to help save and create good jobs. The series is brought to you by the AFL-CIO. To read the other stories in this series, click here.

Lynn’s Paradise Cafe in Louisville, Ky., was a monument to the power of kitschy sculptures and loud colors. Coverage in magazines like Bon Appetit and from TV personalities like Oprah and Bobby Flay brought tourists, and tourists ate fare like bourbon ball French toast and Hot Brown sandwiches. Weekend mornings, you could count on the place being packed with people whose idea of a good place for brunch involved a collection of ugly lamps and $13 Bloody Marys.

But then in January, a former server named Leila DiFazio accused Lynn’s management of firing her over a new policy that paid servers credit card tips on their paychecks rather than in cash at the end of the night, and required waiters to bring $100 cash to work every day to share tips with untipped staff members. DiFazio refused to comply.

“Bringing in $100 each shift is unrealistic for me because I am [a] single mother of a 2 and a half year-old-boy,” DiFazio wrote on the website of an organization called Kentucky Jobs With Justice, part of the national group Jobs with Justice.

Kentucky Jobs With Justice printed DiFazio’s story as a flier and distributed it around the restaurant. The next day, without explanation, Lynn’s closed.

It’s illegal for employers to require tip-pooling, even though tipped staffers often share tips voluntarily with untipped employees like hosts, bussers, dishwashers and cooks. Still, forced tip-pools and other kinds of tip theft are common practices nationwide, according to Daisy Chung, executive director of the Restaurant Opportunities Center of New York, an advocacy group for restaurant workers.

“That’s something a lot of people don’t know -- the tips you leave for that server may not make it to that person,” Chung said.

This is the age of the farm-to-table restaurant, a time when the menus of many upscale restaurants highlight the place and the practices of where the animals they serve were raised. But while the farmer is having a moment, we often forget the plight of the American restaurant worker -- a giant segment of the workforce, and among the last workers who often make less than the minimum wage, relying on customer tips for a living.

We might ask the server about how humanely the free-range chicken was killed -- and that very server might be working for a couple dollars an hour, and sick leave, vacation time or other benefits.

Lynn's isn't the only restaurant where workers have questioned how tips are paid out. ROC-NY reached a $1.15 million settlement with Mario Batali’s restaurant Del Posto in September 2012 over accusations of tip misappropriation, wage theft and discrimination -- accusations Batali denied. His management group settled an unrelated class action suit earlier in 2012 over claims that over 1,000 employees in his Manhattan restaurants were forced to fork over a percentage of their tips to the house -- that settlement came to $5.25 million.

Chung described tip-sharing schemes as an attempt by owners to solve a business problem -- how to compensate low-wage back-of-house employees without actually paying them enough to live on. So they often reach into the pockets of the underpaid waitstaff to do it. “Tipped workers are required to subsidize non-tipped workers, because the restaurant doesn’t actually want to pay more,” she said.

Life as a commodity

Nearly one in 10 U.S. workers is employed in the restaurant industry, a total of 13.1 million people, according to the National Restaurant Association.

Yet of all employment categories tracked by the Bureau of Labor Statistics, restaurant employees receive the lowest wages.

In this sense, restaurant workers are increasingly representative of the situation of American labor in the early 21st century: employed at-will, without benefits, for a wage that’s constantly shrinking in buying power.

Union representation for food service workers is very rare, except in hotels and casinos. Unite Here, the union that includes many of these workers, succeeded in a 2011 drive to organize employees at the W Hotel in Boston, including the hotel restaurant, Market by Jean-Georges.

Greg Roberts, a waiter  with 30 years of experience in the industry, described a sense of the tenuousness of his employment before the drive. “People would seem to disappear,” he said, the result of a single customer complaint or a manager’s pique. “There was a definite sense that no one was safe.”

Schedules would change every week, and management would distribute the schedule two days in advance. Employees were required to be available for on-call shifts one or two days a week, and given only a few hours’ notice if they would be needed.

“It gave them maximum flexibility,” Roberts said. Workers, however, saw it differently. “It makes it very difficult to plan the rest of your life around.”

Caught up in a large corporation’s relentless Taylorization, Roberts felt dehumanized. “You’re a commodity that can be moved back and forth to maximize profit.”

Thanks to healthcare reform signed into law by Mitt Romney, Massachusetts employers have to provide insurance for their workers. But, before unionization, Roberts and other employees had a high-deductible plan that made accessing care prohibitively expensive. A colleague told him he opted out of the company’s health plan in order for his children to qualify for state-subsidized coverage.

Customer service suffered under the old regime, Roberts said. “If you’re unhappy, that comes out. You live and die on people’s perceptions of service. You can’t give good service if you’re embittered.”

Stiffed on the tip

“I don’t tip because society says I have to. All right, I mean, I’ll tip if somebody really deserves a tip, if they really put forth the effort, I’ll give them something extra. But this tipping automatically, it’s for the birds. As far as I’m concerned, they’re just doing their jobs.” --Mr. Pink, “Reservoir Dogs”

The reasons put forth for withholding tips for service are varied but fall into a few general categories. There are the ideological objections, often with a libertarian slant. There’s the misanthropic cheapskate defense. There are studies showing the influence of subliminal factors like music choice, the customer’s genes, the weather, the proximity of the server or size of her breasts.

To a server at a chain restaurant forced to interact with customers according to a script (“Do you need a few more minutes with the menu?”) or to wear a minimum amount of "flair," or a waitress in a diner whose arms, back and feet ache as much as her smile muscles, these excuses will not carry a pitcher of margaritas.

Everyone who has worked as a server has a story of a tip deadbeat. The infamous recent case of the St. Louis pastor who scribbled out the automated gratuity added to her Applebee’s check and wrote, “I give God 10%, why do you get 18?” is an aberration only for the publicity it has generated.

The excuses for not leaving a tip, including Mr. Pink’s memorable stem-winder, proceed from the misguided belief that servers make federal minimum wage, which is $7.25 per hour. Leaving aside the question of whether the minimum wage is sufficient for anyone to live on, federal law allows states to deduct up to $5.12 per hour from the minimum wage for workers who earn more than $30 in tips per month.

For a single adult with no children, the living wage in a medium-size Midwestern city is around $8.28 an hour, according to MIT’s living wage calculator.

“People think a tip is extra, to show gratitude for really good service, but it’s really not,” Chung said. “Consumers should really know that they’re subsidizing workers’ wages, it’s not on top of it. You’re making up the difference for the fact that someone doesn’t make minimum wage.”

Politicians don't seem to know this. Following President Obama’s call for raising the minimum wage in his State of the Union speech, Senate Minority Leader Mitch McConnell of Kentucky said, somewhat cryptically, in a floor speech, “He spoke of workers’ minimum wages, instead of their maximum potential.”

To what degree and by what mechanism the raising of workers’ wages would inhibit their maximum potential went unexplained, although the justice of denying some of the economy’s most marginal workers a raise for 22 years appears to be a conservative article of faith as resistant to empirical dispute as the non-anthropogenic causes of climate change.

Power and its obligations

According to Dorothy Sue Cobble, professor of history and labor studies at Rutgers, traditional unionization like that provided by Unite Here has been on the wane in the restaurant industry for decades. “Probably 1 percent of private sector restaurants are organized now,” Cobble said. “The law has made that more and more difficult.”

Instead, tipped employees are left to rely on the good will of their customers. Cooks and dishwashers, many of whom don’t speak English and may not have legal status, are at the mercy of their bosses.

“As in any industry, you have unscrupulous people and people with consciences. It’s about 50-50,” said Roger Fields, a partner in a San Francisco accounting firm who specializes in restaurants and the author of “Restaurant Success by the Numbers.”

Restaurant owners seek to keep their labor costs at about 40 percent of gross sales, according to Fields, although by focusing on higher-margin breakfast and lunch service or foods that require less-skilled workers, they can squeeze that percentage lower.

“Some of our better clients, their cost of labor is 27 percent,” Fields said. “That’s pretty damn good.”

Even from the owners’ perspective, however, harsh labor practices can end up hurting profits. “The abusive owners, they run up a lot of costs in training,” Fields said. “If you treat people well, they’ll stay with you and do good work.”

A ROC campaign called High Road attempts to persuade restaurant owners of the value of good labor practices, in part by emphasizing the high costs of turnover.

“We definitely acknowledge that it’s tough to be in this business, especially in New York City,” Chung said. “But I think, a lot of time, people don’t prioritize labor.”

“We want to show employers that running a restaurant ethically is possible and still profitable.”

In this, according to Cobble, ROC harks back to an older model of unionism, from before the Great Depression -- one that emphasized training standards, professionalism and providing employers with skilled and reliable workers.

“Employers wanted to have workers in the union because consumers would associate that with the best service, the best food,” Cobble said. Restaurants would advertize their union membership with cards in the window.

To try to push restaurant owners toward better practices, ROC publishes Michelin-like ratings guides and an app that covers a handful of major cities.

Not all states allow employers to get away with paying the federal minimum of $2.13 an hour. Many have set minimum wages higher than the federal minimum, or allow a smaller deduction for tipped employees. A few states, like California, Nevada, Oregon and Washington state, don’t allow any deduction at all for tipped employees -- in San Francisco, the inflation-pegged minimum wage, including for all restaurant employees, tipped or untipped, is currently $10.55.

Gary Alan Fine, a professor of sociology at Northwestern, studied the culture of restaurants from inside the kitchen for his book “Kitchens.” It changed the way he thought about the work that goes on behind the kitchen door, and the way he tips. Fine will sometimes leave an extra $20 just for the dishwashers, he said.

“No one pays them any attention,” he said. “The way that the economic system of the restaurant is structured is that it’s based upon tips. We as diners have to recognize that.”