The choice for Democrats: Obama or liberalism?

Rather than reflexively stand behind the president, progressives can fight for Social Security and civil liberties 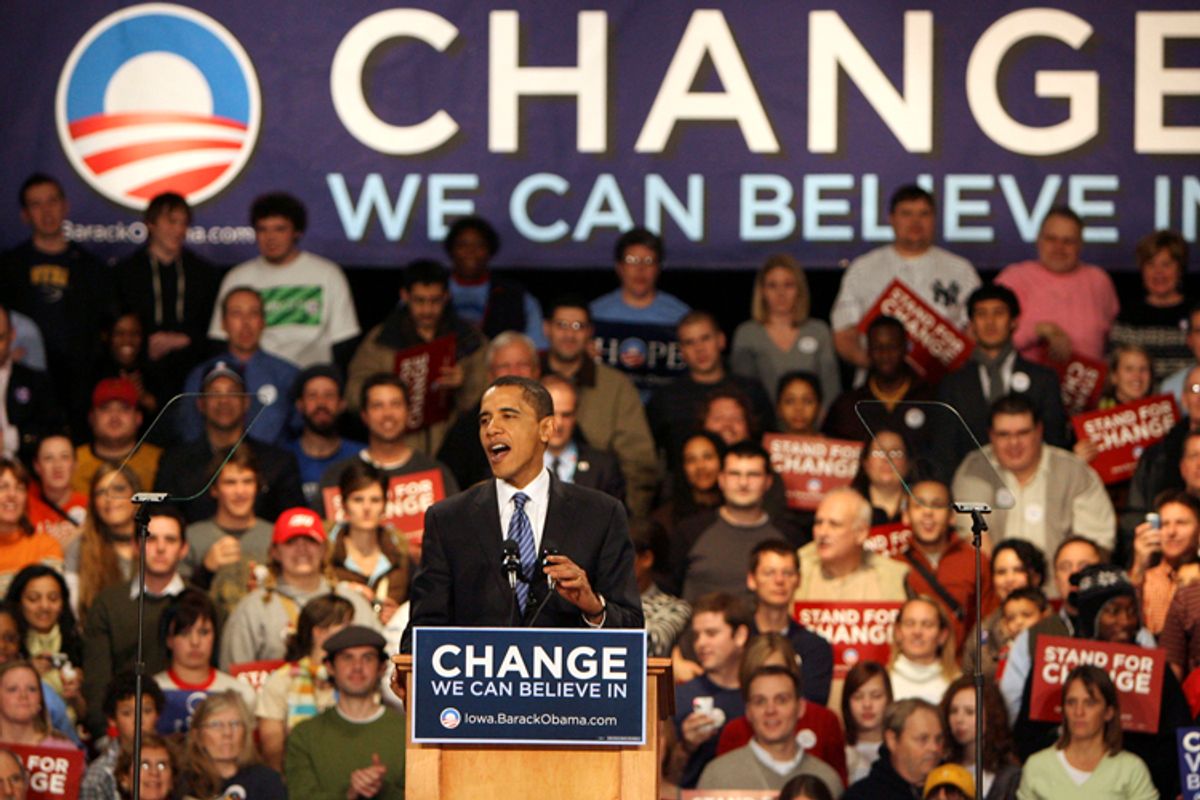 Two headline-grabbing political events in the last week probably seem totally unrelated - and if I told you they were related, you're initial reaction might be to think I'm crazy. But hear me out because together they highlight what could determine outcomes on some of the biggest of life-and-death issues of our time.

The first event was President Obama's dinner with Senate Republicans to try to sell them on his conservative budget plan - a plan that specifically proposes to cut Social Security and means-test Medicare benefits, and generally proposes "$2.50 in spending cuts for every dollar in new revenue," according to Businessweek. The president reiterated this effort to cut Social Security yesterday when he deployed his top economic adviser, Gene Sperling, to formally announce that Obama "prefers" reductions in benefits.

The second seemingly unrelated event came when Kentucky Republican Sen. Rand Paul - and, notably, only one single Democrat - filibustered the president's CIA nominee on the grounds that the administration is lawlessly violating Americans' civil liberties and unduly expanding the so-called War on Terror. The filibuster occurred just before the White House leaked plans to try to expand the original post-9/11 Authorization for the Use of Military Force to officially sanction a permanent unending state of war.

Though these two events may seem wholly separate and mostly about Republican Party politics, they are neither. They tell the tale of a political vacuum on the left - and they reveal far more about the crisis within the Democratic Party than anything happening inside the GOP. It is a crisis may end up being the most important story in American politics right now.

Before we get to that potentially encouraging story, let's review the bad news about the assumptions that currently define Democratic politics.

As evidenced by his outreach to the GOP and his willingness to put forward a Republican-style budget plan replete with Social Security and Medicare cuts, President Obama does not believe he has to worry about Democratic votes for such a plan in the event the GOP signs on. He seems to assume that the same Democratic lawmakers who got elected promising to protect those programs will instantly turn right around and vote for the cuts once they hit the House and Senate floors.

Likewise, the White House also seems to assume that it can continue ignoring constitutional due process provisions, continue prosecuting the undeclared drone war, and expand the blank-check AUMF - all with the complicity of Democratic legislators. Indeed, on the latter set of issues, he likely sees his current efforts not merely as something that gets him no trouble from complicit Democratic lawmakers, but also as an effective political wedge splitting the GOP's Rand Paul wing from its Bomb-Anything-And-Everything wing.

Are these depressing assumptions correct? Perhaps - after all, from the Iraq War to the bank bailouts to the public option, congressional Democrats legislators have made a decade-long habit out of rolling over for presidents of both parties. With those presidents consequently banking on those Democrats' unquestioned obedience regardless of how extreme a particular policy proposal is, those Democrats are now an afterthought, leaving them with almost no leverage to push legislative outcomes in a progressive direction.

However, now comes the good news: there are signs that those old assumptions may could soon be outdated.

This week, Democratic senators broke their obsequious tradition of deference to the Obama White House and publicly pushed back against the president of their own party. Specifically, they went public with demands that the president back off his proposals to slash Social Security and Medicare (and yes, chained CPI for Social Security is, indeed, a serious cut).

Similarly, a day after just one Democratic senator (Ron Wyden of Oregon) opted to stand with Rand Paul's filibuster and just three Democratic senators voted against Brennan's nomination, the Congressional Progressive Caucus sprung into action and released a scathing letter slamming the administration for its civil liberties and drone-war atrocities. This was backed in spirit by a Washington Post op-ed by Obama confidante John Podesta, who almost never dares to criticize the Democratic president. Meanwhile, many of those same Democratic legislators criticizing the drone operations are now sponsoring legislation to fully repeal - rather than expand - the AUMF.

Should those organizations and activists succumb to their standard partisan playbook that says whatever Obama does is Good and whomever opposes Obama is Bad, the outcomes will be predictable - and predictably bad. Think: big cuts to Social Security and Medicare and Permanent War, all wrapped in the Democratic Party label. This outcome is an acute possibility, considering the concerns that the multimillion-dollar Obama-affiliated Organizing for Action group is already naturally inclined to support whatever the White House advocates, no matter how conservative.

By contrast, should those organizations and activists finally prioritize progressive principles over partisan affinity for the president - should they, in specific, promise to withdraw political support for Democrats who vote to cut Social Security and Medicare and who vote support Obama's proposals for Permanent War - then there is clearly a chance to finally change the old paradigm.

Thus, whether you are a liberal congressional lawmaker, organization head, political activist or rank-and-file voter, the only real question now is simple: which side are you on?

As uncomfortable a query as that may be, the left's collective answer will almost certainly have life and death consequences.