After a dazzling and delicious beginning, this saga of rival star magicians falls into a dismal pattern 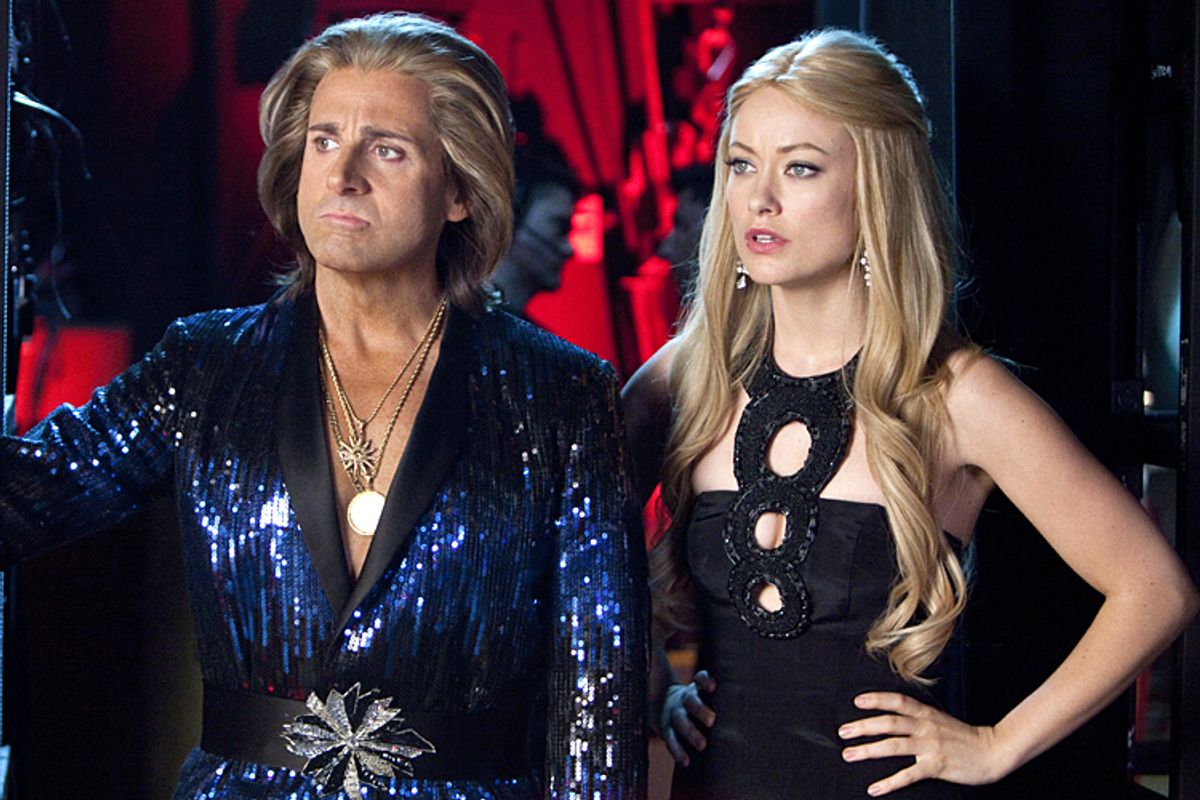 Isn’t it time to talk about the weirdly divided soul of American comedy? In what we might call the post-“Seinfeld” era – the era of “South Park” and “Curb Your Enthusiasm” and “The Office” and “Girls” -- American comedy has become increasingly absurdist, anarchic, unpredictable and even confrontational in the half-hour television format. But when those same tendencies get forced through the Hollywood sausage maker, as in the new Steve Carell vehicle “The Incredible Burt Wonderstone,” it generally comes out as a sentimental and highly conventional tale of fall and redemption, with all the so-called narrative beats in the so-called right place.

Is this really what the audience wants? A deliriously unhinged setup and larger-than-life characters, abruptly devolving into a mind-numbingly familiar story with a totalitarian happy ending? No, wait – don’t answer that. (As others have observed, this describes every hit movie of Will Ferrell's career.) Anyway, if I sound like I’m focusing on the idea of originality, I realize that’s missing the point. Storytelling mostly is not about originality or surprise, and it’s no big secret that the audience likes it if the hero is redeemed and gets the girl in the end. But there’s still something to be said for boring, old-fashioned notions of quality and execution, such as not making your character transformation and happy ending seem careless and tacked-on and irredeemably stupid. There’s also something to be said for “The Incredible Burt Wonderstone,” which stars arguably the most well-liked comic actor in Hollywood and also has juicy supporting roles for Steve Buscemi and one-time comedy box-office champ Jim Carrey. Here’s what it is: This is a really lively, fun and high-spirited comedy. If you leave after half an hour.

Stay a full hour, though, and you’re stuck in a death spiral of unfunniness as all the outrageous charm of the generational conflict between Carell’s Burt Wonderstone, a David Copperfield-style Vegas superstar, and Carrey’s upstart street magician Steve Gray (aka “the Brain Rapist”) gradually leaks out like the sticky red goo from a punctured cruise-ship dessert. There are plenty of easy and genuine laughs early on, as we watch one-time nerd-boy Burt become a creature of clueless grandeur, with a leonine mane and a jumpsuit out of Elvis’ nightmares, during the Johnny Carson era. Some viewers may suspect that Carell and Buscemi, who plays Burt’s sweaty but commonsensical sidekick, Anton Marvelton, overdo the homophobic and/or homoerotic stage patter or the atrocious dance steps set to Steve Miller’s “Abracadabra.” But if you’ve ever actually seen a Vegas stage show, you’ll recognize the production values as being way too close to the real thing.

When we reach the contemporary epoch, Burt is a bronzed and preening creep with a penumbra of oddly hued, stylist-baked hair – it’s a genuinely unsettling portrayal of a certain variety of chemically preserved stardom, which makes it difficult to accept his sudden reinvention as a real person. He and Anton have been headlining a hotel showroom run by the blithe and unctuous casino magnate Doug Munny (played with an understated blend of malice and avarice by James Gandolfini) for a decade. They bitch each other out like an old married couple in between shows, constantly firing their interchangeable female assistants, which is how they end up hiring an aspiring magician named Jane (the lovely Olivia Wilde, game but wasted in an underwritten role) and thrusting her onstage.

But Burt and Anton’s real problem, even if they don’t know it yet, is that their old-school, prop-heavy stage illusions are no match for Carrey’s Steve Gray, a buffed-out dude with Jesus hair and tattoos who’s doing low-grade performance art and shedding blood on the sidewalk outside the casino. (Gray is most obviously modeled on metal-flavored magician Criss Angel, with a side of David Blaine.) One of the numerous things that starts to go wrong in “The Incredible Burt Wonderstone,” which is directed by TV veteran Don Scardino, is that we’re supposed to find Steve more repellent and less authentic than Burt, and it totally doesn’t work. I mean, they’re both idiots, but Carrey is just so damn enjoyable when playing mock-profundity and bogus intensity, especially when set free from being honorable or decent. This one of the best roles of his recent tortured film career, and I immediately wanted the movie to become Steve Gray’s story, and hoped the icky and reptilian Burt would go away.

Indeed, Steve gets written out of the movie almost entirely after Burt loses everything and winds up living in a shabby motel room, with a desperation gig doing magic tricks for old folks in a retirement home. If you’re guessing he makes connections there – to magic, to love, to life, to a crusty but angelic Alan Arkin character – and is spiritually renewed, then you can write the rest of the movie without my help. Thing is, nothing about the script (which is by Jonathan Goldstein and John Francis Daley) or Carell’s uncannily unpleasant performance to that point gives us any indication that Burt is anything other than a fatuous, sexist, egotistical creep with no understanding of other people, himself or the universe. Scardino is relying almost exclusively on the fact that Carell is the star of the picture and we basically like him, or at least think we do. Therefore it’s OK for him to go through a chrysalis-like overnight transformation from unbelievable jerkass to decent and charming human being with a restrained wardrobe.

What makes the minor-league dumbness of “The Incredible Burt Wonderstone” so disappointing is that the film has at least some of the ingredients of a shrewd American satire, not least in the quiet, clever menace of Gandolfini’s character, who names his new hotel after himself (“The Doug”) and appears on the giant video screen outside its front doors, beaming and preening. Jay Mohr gets a lovely throwaway role as a failed magician called Rick the Implausible, a regular in a dive bar haunted by magicians that could have been the setting for David Mamet-style shop-talk encounters between Burt and Steve. Instead, everything that happens in the final two-thirds of the movie – which is to say almost nothing – seems calibrated to cynical, if plausible, ideas about the audience: First you make them laugh, then you mellow them out with a full hour of boredom, so they can text for tapas reservations and tweet about how great the movie was before it’s actually over.